If you are fond of sweet peppers, then the one that you shouldn’t miss out on is none other than the great gypsy pepper. Its sugary sweetness is very rare among pepper, and its floral elements make it all the more attractive.

Gypsies are perfect for frying peppers for their thin skin. Also, its skin walls are sufficiently thick enough for stuffing.

The appearance of the pepper is visually pleasing; the peppers take on a hodgepodge of flower-like multicolor as they go through various stages of growth. Besides the culinary uses, it’s worth growing gypsies for ornamental landscaping.

CONTENT
What Are Gypsy Peppers?
Origin And History
How Hot Are Gypsy Sweet Peppers?
What Are Their Flavor And Appearance?
Uses In Cooking
FAQs

What Are Gypsy Peppers?

Gypsy peppers, under the Capsicum Annuum species, are a hybrid variety belonging to the Solanaceae or nightshade family. The pepper is a hand-bred cross between a sweet pepper and a sweet Italian bull horn pepper (Corno di Toro).

They are loved by people for their thin skin and sweet flavor; a popular home garden variety that can be eaten at any stage of maturity.

Easy to grow them and are a prolific producer, yielding 50 to 100 peppers in a season. Two or three plants alone can produce enough peppers for home cooks both fresh and pickled preparations.

They are also often referred to as Cubanelle peppers. Over the years, this pepper has become popular with restaurants as a quick-cooking sweet pepper.

Gypsy pepper was developed by Petoseed (now Seminis Vegetable Seeds), a company founded in 1950 in Southern California. This company was a frontrunner in the hybridization of tomatoes and hot peppers from the early 1970s to till 1990. The seeds developed by Petoseed were known for disease-resistant varieties and are credited with the recovery of San Diego’s tomato industry.

In 1981, Petoseed developed gypsy pepper as a hybrid variety of sweet pepper that can resist common pepper plant diseases such as tobamovirus or tobacco mosaic virus. In fact, this pepper received the distinction of National All-American Selection for its healthy growth features.

It was born out of a cross between a sweet Italian bull horn pepper and bell pepper. With its increasing popularity in use by restaurants and home cooks, now the pepper is commercially grown by many small farms in the US and Mexico.

How Hot Are Gypsy Sweet Peppers?

The gypsy pepper has a heat level of 0 SHU on the Scoville Scale, meaning it has no heat at all. Technically, it isn’t a pepper by common standards. It’s just a sweet pepper similar to bell pepper; they are at the lowest level of the Scoville Scale, meaning they are not spicy. Note that some varieties of bell peppers can have a mild heat ranging between 100 to 500 SHU.

In comparison to a jalapeno pepper, they are 2,500 to 8,000 times milder. By the way, no one is eating gypsy peppers for heat. Evidently, they are the mildest and sweetest peppers in the world.

What Are Their Flavor And Appearance?

Gypsy peppers are on average 10 cm (4 inches) long and 5 cm (2 inches) in diameter. They have narrow shoulders with a tapered, elongated shape, a mixed shape of jalapeno and bell pepper. The pepper has thin outer skin with moderately thick flesh that is crisp, and a succulent hollow cavity filled with many flat, oval-shaped, cream-colored seeds.

They are beautiful-looking peppers that take on multiple colors on the same pepper at different stages of growth. They start a whitish or yellowish green, gradually age to yellow and orange, and ripening they turn a mix of deep orange and red. In fact, the rainbow of colors all on one plant is perfect for container gardening with color pop that renders edible peppers.

The young gypsy pepper is crunchy and sweet with a slightly acidic flavor. When matured, the pepper develops a complex, fruity sweet taste with subtle floral notes. What makes this pepper different from other peppers is its absolute lack of heat. The complexity of its sweetness is a big differentiator between it and the bell pepper.

You have several culinary options with gypsies. As you already know, this pepper with thin skin and the moderately thick flesh is excellent for both raw and cooked applications such as roasting, frying, or stuffing. Most importantly, they can be used at any stage of ripeness, from tender pale green to ripened orange-red stages.

Many chefs prefer to use gypsies for stuffing than the thick-walled bell peppers; gypsies are less likely to be undercooked, and also offer a crispy, crunchy texture.

To be more interesting, when you use charred gypsies they render a delicious smoky sweetness. Also, you can use gypsies in any preparations that call for bell peppers.

They can be diced and sautéed, charred for smoky sweetness, or simply chopped to be used in a wide variety of stir-fries.  Fresh peppers can be added to salads, sandwiches, or used in dips. They can be a good complement to common vegetables and herbs; their sweet flavor will stand out in any recipe. Gypsies are more versatile than bell peppers and make for unique flavor pairings even when raw. 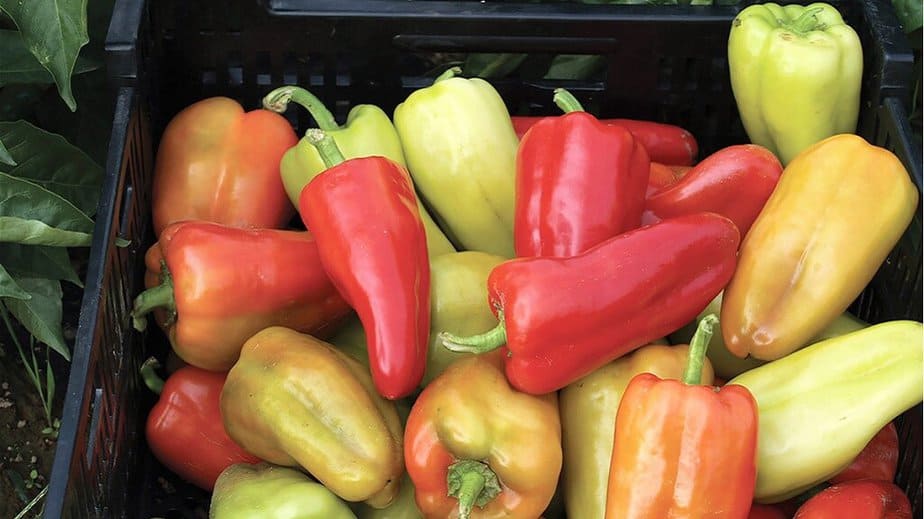 How to grow gypsy peppers?

Gypsy peppers are highly disease-resistant hybrid peppers that can be easily grown in your home garden or containers. You can grow them just as do with jalapeno or habanero peppers. They grow best in full sun and require minimal watering. Gypsy pepper generally takes about 65 days to reach maturity but the pods can be harvested at any stage of maturity.

Where can I buy gypsy peppers?

You can buy fresh peppers from local grocers, especially on the West Coast of the United States. Or else, look for them at a specialty chili farmer’s market near you. With the increasing popularity of the pepper, today, you can find many small farms growing this sweet chile in different parts of the US and Mexico. It’s easy to grow this pepper; you can source gypsy chili pepper seeds from online sellers.

How to store gypsy sweet peppers?

Fresh peppers will keep up to 2 weeks when stored unwashed, wrapped in a damp paper towel, and sealed in storage boxes in the refrigerator. To preserve them for a longer period, freezing is the way forward. Remove the stems, membranes, and seeds; spread them on a tray so that they stay separate and freeze until they turn firm. Transfer the frozen chilies to a freezer-safe vacuum-sealed bag and store them in the refrigerator. Frozen gypsy sweet peppers will stay good for a year.

How do I know when my gypsy peppers are ready to pick?

They take about 65 days to reach maturity, but they can be harvested at any stage of their growth, preferably when they have grown to full size (3 to 4 inches long).

It’s a sweet pepper with no heat at all, a big zero on the Scoville Scale, and stays at the same rank as its cousin, the bell pepper. As they measure 0 SHU on the Scoville Scale, some do not consider them to be true pepper. This pepper does not have Capsaicin, the heat-producing chemical compound found in hot peppers.

What are the substitutes for sweet gypsy chile peppers?

The best substitutes for gypsies are sweet bell peppers, Italian bull horn pepper, sweet banana, and pimento; all of them are peppers with 0 SHU on the Scoville Scale. If you’re looking for a slightly hotter option, Mexican bell or pepperoncini (ranges between 100-1,000 SHU) could be other alternatives worth considering.