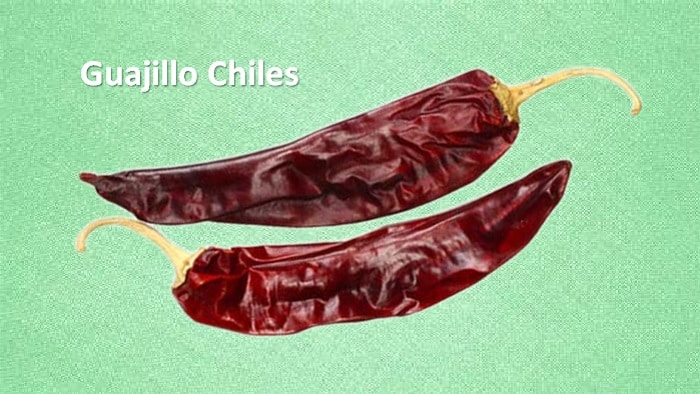 Guajillo chile is a dried mirasol chile, a variety of Mexican chilies in the species of Capsicum annuum.

If you are a Mexican foodie, then you cannot miss out on Guajillo chiles with their sweet-heat and smoky flavor. It’s a commonly used pepper in salsa, soups, tortilla chips, or enchiladas.

Mixing Guajillo with other chiles for complex adobos or mole sauces is a prevalent practice in Mexican cooking. This most common ingredient in Mexican cuisine has the same heat as that of Anaheim chili peppers and Tabasco sauce.

This article explores the best substitutes for Guajillo peppers that you can use in a pinch.

This pepper is popular in Mexico, but it’s scarcely available in most parts of the world. So what are the alternative chiles to use when you can’t find Guajillo?

I have found a few good substitutes for Guajillo chiles that have similar heat and flavor profiles. Here are the alternatives to consider:

Ancho pepper is a close cousin of Guajillo, which is also part of the “holy trinity” of chiles. Basically, it’s ripe and dried poblano peppers. It’s an easy-to-pick substitute for this pepper, which is conveniently available in most supermarkets and grocers.

Ancho peppers are milder than Guajillo in heat, but their similar smoky flavors make them tango. They do tend to be sweeter and meatier. However, ancho pepper has a deeper and earthier flavor compared to the fruity flavor of Guajillo with notes of tea.

Despite a few dissimilarities, you can very well use ancho pepper in place of Guajillo pepper in any recipe that calls for it. This chili works well in recipes like soups, stews, sauces, salsas, and moles.

While substituting, use ancho peppers in a little more quantity than Guajillo peppers. Some of the ancho pepper substitutes could work as well.

Pasilla chile, or chile negro, is the dried form of the chilaca chili, also a member of the ‘holy trinity’ of Mexican chiles. This chili is milder than Guajillo in heat, but both are slightly sweet.  Both are sweet and smoky.

Both of them have an aura of earthiness in their flavor. Pasilla pepper has slight hints of berries and cocoa, whereas Guajillo has hints of green tea. They can be substituted for each other in salsa, mole sauce, and, technically, any recipe.

Of course, the Pasilla chili pepper is not an ideal substitute for the Guajillo chile, yet they have more similarities in common than a few differences.

Use Pasilla as a milder chile and use it in a little more quantity than Guajillo pepper.

The cascabel peppers, also known as the rattle chili, are one of the Mirasol cultivars. The ‘rattle’ or ‘bell’ descriptions narrate the tendency of loose seeds to rattle inside a dried cascabel when shaken.

To be sure, it isn’t a perfect replacement for Guajillo, but its earthy and nutty flavor is an equally satiating substitute for Guajillo chile flavors.

You won’t find the same sweetness of Guajillo in the Cascabel, but its woodsy taste is equally gratifying as the tea-like undertones of Guajillo.

In a pinch, Cascabel is a worthy stand-in pepper for Guajillo pepper.

The New Mexico chili pepper is a cultivar group of the chile pepper from the US state of New Mexico. You’ll be disappointed with its low heat, but this chile has an earthy and sweet flavor like the Guajillo. Plus, this chile has wonderful cherry tones and traces of acidity equivalent to Guajillo.

When it comes to heat, New Mexico peppers rank at 1,400 SHU in the heat ratings. So this dried chili works best as an alternative to Guajillo chile only in low-spicy dishes.

Use toasted New Mexico chiles for better flavor, as you do with Guajillo. 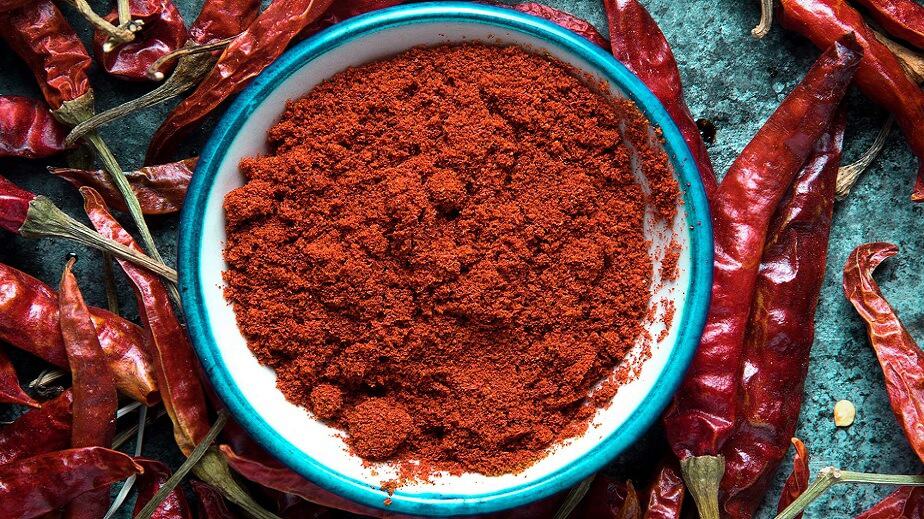 Can I use chili powder instead of Guajillo?

What is the difference between Ancho and Guajillo chiles?

A Guajillo chile is a mirasol chile, whereas ancho chile is made from dried poblanos. Ancho chile is about three times milder than Guajillos, but both these peppers are predominantly smoky, also sweet, and chocolaty. Overall, they have similar flavors and uses, but differ in heat level.

Is Pasilla similar to Guajillo?

Both these chilies are part of the Mexican “holy trinity” of chiles. They are very similar in flavor, but Guajillo has double the heat of Pasilla. Flavor-wise, both have chocolate and cranberry-like hints and can be used interchangeably in most recipes that call for either of them.

One dried Guajillo chile equals how much powder?

Is chile guajillo the same as New Mexico chili peppers?

No, they are different types of pepper, but they are closely similar in flavor. Guajillo chili can be 2 to 5 times hotter than New Mexico chiles (1,400 SHU). If you aren’t a chili head, New Mexico chile is a good pick for you. Like the guajillos, the New Mexico chile has an earthy, sweet flavor with traces of acidity and cherry tones in it.

Is puya chili a good substitute for guajillo chili?

Yes. Puya chiles are spicier but smaller than the former. Their heat level ranges between 5,000-8,000 SHU. You’ll enjoy the fruity flavor of puyas with lovely hints of cherry and licorice. In fact, these two peppers are often used in salsa, dips, sauces, soups, casseroles, and a wide

Is California chile the same as Guajillo chile?

Chile California, also known as Anaheim chili, is a pepper originally from Anaheim, California, as its name suggests. It is believed to be like Guajillo peppers, but there are a few differences. The Anaheim pepper is a mild to medium-hot pepper with a slightly sweet taste. It is used in Mexican and Tex-Mex cuisine. It can be used as a Guajillo substitute.

The Guajillo pepper is one of the most popular Mexican chiles, widely used in several Mexican and American dishes. If you are living outside of the Mexican region, this chile is quite a scarce item, and thus it calls for an alternative.

According to my findings, ancho pepper is the best Guajillo chile substitute. Other worthy alternatives for this chile are the Pasilla chile and the Cascabel pepper.

For further reading, you may also have a look at the detailed reviews of Chile De Arbol and Chipotle Pepper in other articles here.