It is very difficult to give up sugar…and sweeteners make the foods even more delicious.

Most of the foods and drinks that we regularly consume already contain a good bit of sugar in some form or other.

There are also several varieties of natural sweeteners available for our use.

You will also find many brands of artificial sweeteners that claim to be diabetes-friendly. Too good to be true…!!

Most of the sweeteners that are processed from natural and organic sources are good and safe for consumption…of course, not beyond the healthy amount of intake.

Baked foods and confectionaries that we enjoy do NOT contain natural sweeteners in most cases.

Even the soda and sweetened beverages we drink have a lot of added sugar (mostly fructose); they rarely have healthy sweeteners from natural sources.

Most of us have a strong affinity for sweets though we know that the refined sugars in them are quite unhealthy in many ways.

The healthiest alternative to refined sugars and artificial sweeteners is natural sweeteners.

In this article, let me discuss with you some of the good and bad sweeteners.

Good sweeteners are deliciously sweet with very low calories and low fructose in them. They come from healthy natural sources.

None of the artificially processed sweeteners are found to be healthy and safe in the long run.

Here are some of the comparatively safe and healthy sweeteners processed from natural sources.

One of the popularly used sugar alcohol-based sweeteners is Xylitol. This is just like the normal sugar found in food.

Xylitol has low calories present in it; less than 2/3 caloric value of the sugar.

Actually, the sugar from Xylitol is not fully absorbed by the body, and so the calorie intake from it is much less than the normal sugar.

It is also healthy for the teeth and bones; especially lesser possibilities of tooth decay with this sweetener.

There are a few studies that suggest this sweetener is good for preventing osteoporosis and for increasing bone density.

The diabetes patients will be relieved to hear that Xylitol has only a very little impact on raising blood sugar or insulin levels.

One drawback with Xylitol that is quite often reported by the users is the intestinal distress and gastrointestinal upsets that occur especially when it is consumed in larger quantities.

It should not be mistaken that Xylitol is a sugar-free and calorie-free sweetener. It has 2.4 calories in it per 1 gram.

There are also other sugar alcohol-based sweeteners like Maltitol, which has a lot more calories.

Pure Xylitol is the best as it does not cause so many intestinal upsets, unlike the lower quality alcohol-based sugars.

There is no doubt that Xylitol sugar alcohol is far healthier than refined sugar, artificial sweeteners, or high fructose con-syrups.

If you are looking for low-calorie sweeteners, Erythritol is another good option.

This is a sugar alcohol naturally found in some of the fruits.

The calories present in Erythritol are much lower than in Xylitol, in fact, it contains only 0.24 calories per gram.

It has approximately 70% sweetness of the sugar but only 6% of their calories.

This natural sweetener is good as it has only a negligible impact on blood sugar and insulin levels with no effect on cholesterol or triglycerides levels increase.

Like all the other sugar alcohols, this too can cause digestive issues if consumed in larger amounts.

However, the over-consumption of sugars of every type is unhealthy.

One of the emerging sweeteners currently is the Yacon Syrup.

It has become quite popular as many health experts have come in support of the added health benefits of this sweetener.

Yacon syrup is a sweetening agent extracted from the tuberous roots of the yacon plant native to the Andes mountains of South America.

Currently, this syrup is more popular as a weight-loss supplement than a sweetener. Some studies suggest good weight loss possibilities by consuming this syrup.

Fructooligosaccharides (FOS), naturally present in this syrup, forms soluble fiber that feeds the good bacteria in the intestine and they increase healthy metabolic activities.

The soluble fiber in yacon syrups prevents constipation, and it also helps in healthy digestion.

Just like other sweeteners, this too must be consumed moderately to avoid intestinal upsets, and increased calories supply into the body.

The most popular natural sweetener is Stevia, which has low-calorie.

Stevia rebaudiana is the plant, grown in South American countries, from which stevia sweetener is extracted. Studies have shown that Stevia has been used throughout the world since long back in the ancient historical periods as a sweetener and medicine.

The two main compounds in Stevia extract are Stevioside and Rebaudioside. These two compounds are 200 to 700 times sweeter than table sugar.

Only a very little amount of calories is present in Stevia, which is virtually nothing.

The sweetener in Stevia is healthy. According to one of the animal studies it was found that this sweetener is good for lowering bad cholesterol and for removing plaque buildups on the walls of the arteries.  Stevia is also good for improving insulin sensitivity.

Stevia is bad for one thing; that is the taste of it will not be appealing to most people. If you like the taste of it, then you should replace other sweeteners you use with Stevia for the excellent health benefits you can derive from it. 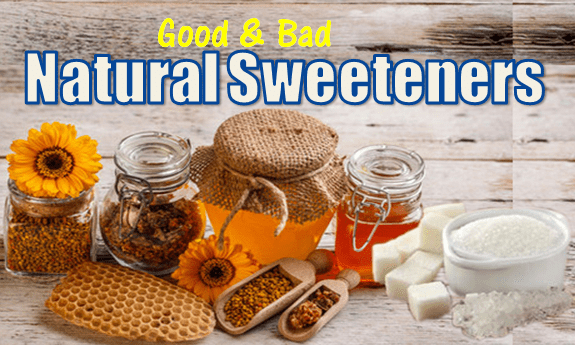 The next best sweeteners, other than the major four of them we discussed above, are maple syrups, honey, coconut sugar, and molasses.

These four sugar alternatives are also good as they contain only a little amount of fructose.

The sugars from them will not cause health issues if you are following a healthy diet plan without junk foods and other high-carb diets.

Even healthy sweeteners and sugar will create health problems if they are consumed in excess especially if you are already with insulin resistance and obesity issues.

It is better to avoid even the natural sweeteners for people who are food addicts and on low-carb or ketogenic diet plans.

Especially the honey not only brings the sweetness but also several health benefits and medicinal goodness along with it. It contains antioxidants, amino acids, enzymes, minerals, and vitamins essential for the body.

However, the processed honey that is commonly available in stores cannot have the health benefits got from 100% pure honey with no added ingredients in it.

It is healthy to use a few teaspoons of honey as a sweetener despite a good bit of fructose in it, provided you also follow a healthy diet regularly.

Artificial sweeteners are really bad for health, in the long run, worse than table sugar and fructose.

Let us have a look at some of the popular artificial sweeteners that deserved to be always avoided.

It is a synthetic chemical composed of three ingredients – two amino acids and a methyl ester bond. A normally required amount of amino acids are good for health, but excess intake of methyl ester can cause health hazards after a period of regular consumption of it.

Some studies suggest that Aspartame can cause birth defects, brain tumors, obesity, and even cancer.

It is a synthetic chemical created in a laboratory in which three chlorine molecules are added to one sucrose (sugar) molecule to form an artificial sweetener. Many people this sweetener as FDA has approved it as safe for consumption.

However, some of the very studies that the FDA used for approving Sucralose have pointed out the possible side effects of prolonged use of this sweetener.

It’s some of the potential side effects are a decrease in red blood cells, possible male infertility, and it calcifies and enlarges the kidneys.

It is a sweetener commercially produced from several species of agave plants. Agave syrup is sweeter than honey and tends to be less viscous.

This sweetener is not so healthy for consumption because of the high fructose content in it.

It has the potential to develop insulin resistance and substantially increased triglyceride levels in the blood that can give rise to heart diseases.

Is Fructose Sugar Is Bad For Health?

Fructose is commonly known as the substance that gives sweetness to fruits. The fructose in fruits is not bad as they do not get fully absorbed into the body.

However, the fructose extract used as a sweetener is terribly bad for health as it has several side effects associated with it.

Fructose is mostly used as a sweetener in soda and sweetened soft drinks like colas.

It is metabolized into adipose fat by the liver faster than any other sugar. The belly fat is mostly because of the adipose fat type fat mostly produced from fructose sugar.

It also leads to insulin resistance faster than other sugars. It increases the risk of diabetes and heart disease.

It is always good to avoid foods and beverages that contain an excessive amount of fructose as a sweetener.

Even the fruits should be consumed in a balanced amount; it is better to consume whole fruits than fruit juices.

All forms of sugars are toxic to health especially when they are consumed in an excess amount.

Natural sweeteners like Stevia and Xylitol are healthier than refined table sugars.

Most of the foods that we eat already have more than the required amount of sugar for the body. For this reason, it is always good to avoid every food that contains artificial sweeteners and fructose as ingredients for adding sweetness to them.

With a balanced amount of sugar intake, we can ward off several diseases like certain cancers, cardiovascular diseases, diabetes, obesity, Alzheimer’s, etc.

If you are VERY serious about limiting sugar intake to a healthy amount, you are sure to stay healthy even at your old age.