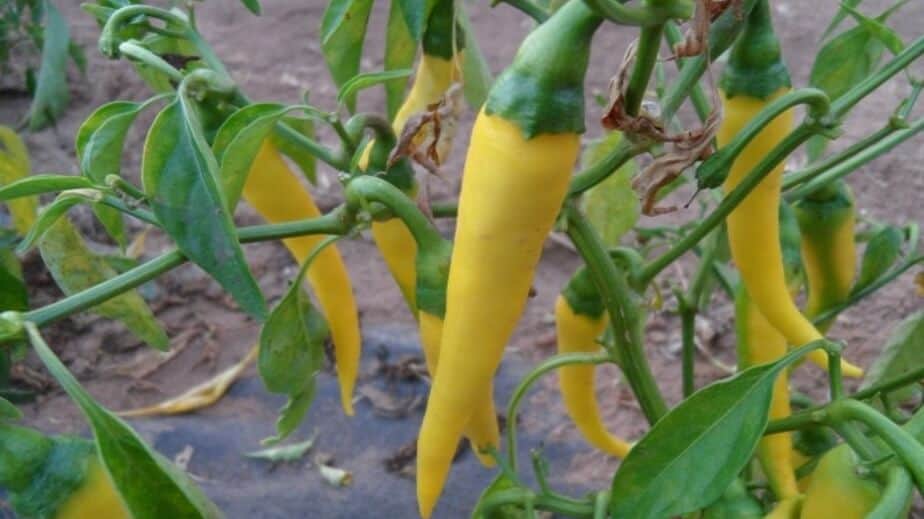 The original red cayenne pepper has its origin in Cayenne, French Guiana; it has been in cultivation since ancient times. But today there are 7 verified distinct verities of Cayenne peppers.  And one of them is the Golden Cayenne Pepper which was created from the original cayenne and this variety was developed in the United States. Currently, you’ll find this pepper in limited availability through specialty stores in the United States. You also get to buy them in dried and powdered forms at supermarkets, spices stores, and online retailers.

TABLE OF CONTENTS
What Is Golden Cayenne Pepper?
Golden Cayenne Scoville
What Does It Taste Like?
Uses In Cooking
Health Benefits

What Is Golden Cayenne Pepper?

Golden cayenne pepper, botanically classified as Capsicum Annuum, belongs to the Solanaceae or nightshade family. Also known as Yellow Cayenne Pepper, the Golden Cayenne is a special variety of Cayenne pepper. It is predominantly found in home gardens, grown for both culinary applications and ornamental benefits.

Pods of this pepper are slender, elongated, and slightly twisted, and have an average length of 18 cm and 2 cm in diameter. The peppers are slightly curved and conical in shape and are tapered into a pointed end. As the pepper grows to maturity, the color changes from light green to bright yellow and is smooth and waxy. Underneath the skin, it has a pale yellow-colored thin flesh and the central cavity is filled with ivory membranes and cream-colored flat seeds.

Golden Cayenne pods are excellent for cooking or fresh eating in sauces and salsa, or dried and ground into a unique, golden yellow powder.

Like the traditional cayenne plant, this one is also very productive with up to 60 fruits growing at a time. Many grow this pepper for visual ornamental interest with their yellow pods in green gardens. Also, the plant grows about a half foot taller than the red cayenne. The main season of harvest lasts from summer through early fall.

Golden cayenne pepper is a medium-hot pepper with heat levels ranging between 30,000 and 50,000 SHU on the Scoville Scale. Heat-wise, this pepper takes a place between Serrano and Thai hot peppers. In comparison to common Jalapeno peppers, on average it is around 12 times hotter. Most people enjoy the moderate-level heat of Cayenne which is far away from habaneros and other super hot chilies. Among the many other varieties of cayenne, this one comes close to the original red cayenne of French Guiana in terms of heat and flavor. 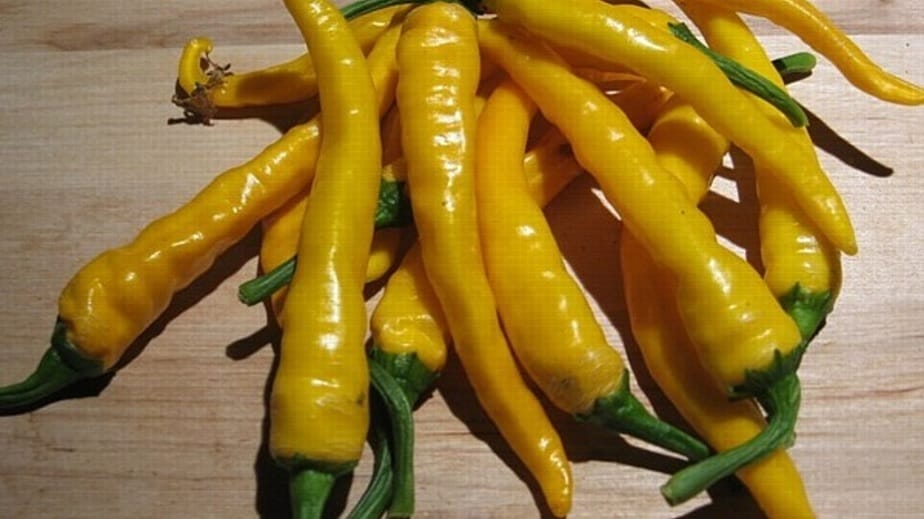 Golden cayenne peppers have a mild sweet-tangy, strong peppery flavor with moderate heat. In terms of spiciness, this pepper is at a very good level for most people. It’s spicy enough to give a good punch but not so hot as to turn off most users.

They are typically dried and ground into golden chili powder and used as a seasoning, marinating, and flavoring of various dishes, especially meat and seafood dishes. Fresh peppers are chopped and added to stews, soups, salsas, salads, and marinades. Fresh chilies go well with stir-fries and casseroles and can be sautéed with vegetables.  All varieties of cayenne pepper in general pair well with onion, garlic, tomatoes, sage, oregano, bell peppers, and parsley. Yellow cayenne is also a good substitute for red cayenne, Tabasco, Pequin, Aji Amarillo, and Aji Charapita for they all have the same level of pungency and spiciness.

A lot of people rely on cayenne pepper for its health benefits and is often used as supplements and skin creams among many other products. This pepper contains high DA (daily value) of vitamins A and C, good for boosting immunity and they work as powerful antioxidants. A good presence of capsaicin in this pepper helps to contain anti-inflammatory properties and enhance the health of the circulatory system. Cayenne is believed to awaken metabolism and help in steady weight loss.

For further reading, follow the link to find out all facts on Cascabella Peppers on this blog.