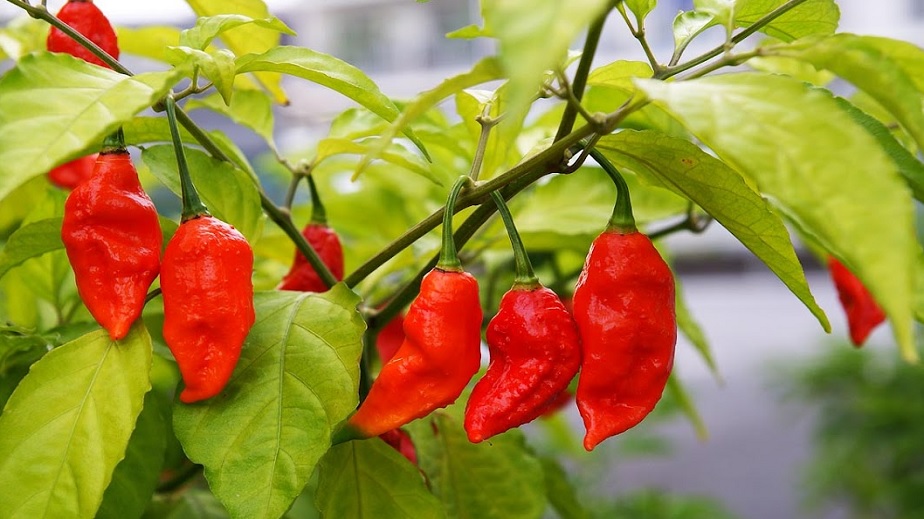 Scoring over 1 million Scoville heat units, the ghost pepper, also known as Bhut Jolokia, is one of the hottest peppers in the world.

In 2007, the Guinness Book Of World Records awarded this pepper the distinction of “World’s Hottest Of All Spices.”  The record didn’t last long and the current record holder for the hottest pepper in the world is the Carolina Reaper (also read the comparison between Carolina Reaper and Bhut Jolokia).

In this article, you’ll read all the key features of Bhut Jolokia including its Scoville heat level, flavor, and uses.

CONTENT
What Is Ghost Pepper?
Ghost Pepper Scoville
What Does It Look And Taste Like?
Uses Of Bhut Jolokia
FAQs

What Is Ghost Pepper?

The ghost pepper is a super hot chili pepper mainly cultivated in Northeast India. It’s a hybrid of Capsicum frutescens and Capsicum chinense but more of the latter. Bhut Jolokia is a naturally growing pepper and the plant is a prolific producer.

In 2007, the Guinness Book Of World Records officially certified this pepper as the world’s hottest pepper; held the record from 2007 until 2010.

It’s an iconic hot pepper that has won thousands of fans across the world. A super hot pepper with over one million-plus Scoville heat units that is a woefully unbearable heat for most people.

The ghost pepper was officially the hottest pepper in the world from 2007 to 2010; eventually, it was dethroned by the new hybrid varieties of super-hot chili peppers.

However, the current reigning champion (as of 2022 per record), Carolina Reaper is twice hotter than the Bhut Jolokia. Other super hot peppers such as Trinidad Moruga Scorpion, Butch T, and Naga Viper have almost double the heat of this pepper.

Handle ghost pepper with caution: While harvesting or cooking super hot peppers, make sure to wear gloves and kitchen goggles to protect yourself from chili burns.

The pod-like fruits grow to 2 to 3 inches in length. Like most super-hot peppers, the typical Bhut Jolokia ages from green to red, though there are orange, yellow, purple, chocolate, and white varieties.

The pods taper to a point but are not as pointed and curly as the tail end of Trinidad Moruga Scorpion. The waxy skin has wrinkles, and a pock-marked texture, like most other super hot peppers do.

Bhut Jolokia has an intensely fruity, sweet flavor and underneath a light smokiness as well. The heat kicks in within a few seconds after the first bite, and the burning usually intensifies over 10 minutes and takes about 30 minutes to subside. At the peak of its heat, you can expect physical reactions like watery eyes, sweating, hiccups, and even shortness of breath.

The heat of the pepper can be reduced by removing the innards before cooking, but the flesh will still have a major part of the heat. If you cannot tolerate such extreme heat, consider using them sparingly, or introducing a dairy may help to take the heat down.

The intense heat and fruity flavor of Bhut Jolokia make it an excellent pepper for making super hot sauces. Also, dehydrated chilies are often made into chili powder and chili flakes. Raw chilies are chopped into small slices to use in larger meals like pots of stew, soups, or hot vegetable dishes. A little goes a long way. Use them sparingly like you would use other hot peppers like habanero, Trinidad scorpion, chocolate habanero, or Caribbean red habanero pepper.

One of the main attractions in some of the fast-food chains like Red Robin is the ghost pepper sauce they serve along with burgers, pizzas, and other dishes.

They say that eating Bhut Jolokia helps to beat summer’s heat for it makes you perspire which ultimately cools the body down.

Removing the pith and seeds of the pepper makes them milder. Similarly, roasting the peppers before use tends to reduce their heat. 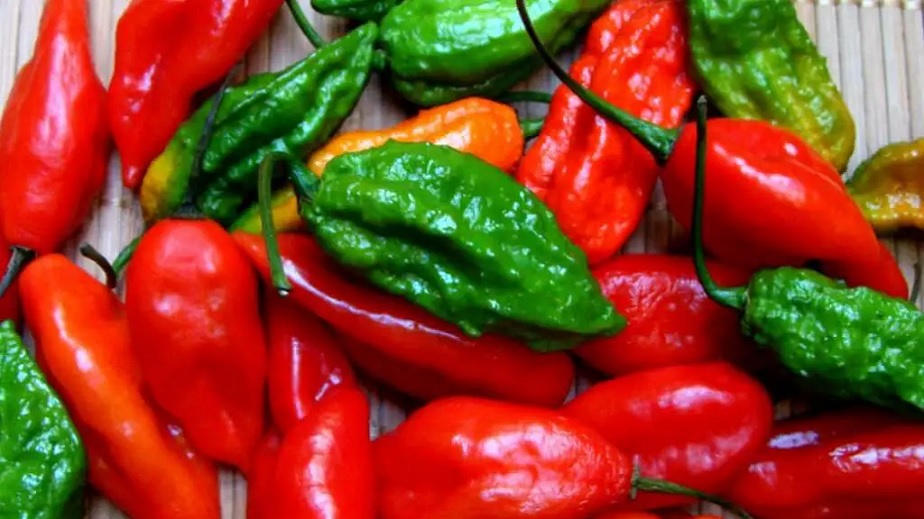 Why this pepper is called a “ghost” pepper?

In the Assamese language, the word “bhut” means “ghost”. Possibly the Assamese people, the largest ethnic population in Northeast India, began to call this chili “Bhut Jolokia” (Ghost Pepper) because of the extremely terrifying heat of this pepper that sneaks up on you like a ghost.

What are the differences between a ghost pepper and Carolina Reaper?

Both ghost pepper and Carolina reaper are intensely hot and have a sweet, fruity flavor. However, Carolina reaper is a hybrid variety of pepper that clocks in more than double the heat of Bhut Jolokia on the Scoville Scale.

Can eating ghost peppers kill you?

Eating a few super hot chilies isn’t going to cause you any serious health issues. According to Dr. Paul Bosland of the Chile Pepper Institute, eating large amounts of super-hot chilies within an hour could kill you. A study conducted by Dr. Paul in 1980 calculated that 3 pounds of extremely hot chili peppers in powder form eaten all at once could kill a 150-pound person. In reality, it isn’t possible for anyone to consume 3 pounds of chili powder all at once. After consuming a few tablespoons of chili powder itself, your body would strongly react and create a condition where you’re unable to consume it anymore.

How to grow Bhut Jolokia?

Ghost peppers grow best in the typical warm and humid climate of the Indian subcontinent. Growing them in the greenhouse will be more productive in colder climatic conditions in Europe and America. Plant the seedlings about two feet apart and with sufficient exposure to direct sun. The seeds germinate in around 30 days and mature fruits are ready in 90 to 100 days after transplanting.

How much does a ghost pepper weigh?

A regular size pepper’s weight is about 1/3 ounce (around 10 grams).  Note that about 1 ounce (3 whole chilies) is enough to make a pot of hot soup or 100ml hot sauces.

This pepper is as nutritious and healthy as any common pepper like jalapeno or poblano. Because of its extreme heat one can hardly eat 3 to 8 grams of this pepper at a time. This means that you get only a fraction of the health benefits compared to other mild or low-medium hot peppers which are eatable and commonly used in regular cooking.

Where can you buy ghost peppers?

The super-hot peppers aren’t a mainstream cooking pepper like jalapeno or cayenne peppers. It’s hard to find fresh ghost chili peppers outside its main areas of cultivation, especially outside the North-Eastern states of India. You can buy dried and ground pepper in online stores. Buy Bhut Jolokia seeds from online sellers and grow them in your kitchen garden.

When is a ghost pepper ripe?

The seeds germinated in around 30 days and the chili pods mature in 90 to 100 days after transplanting. Overall, it takes about 130-150 days to for the ripe fruits to be ready for harvest.

What is hotter than ghost pepper?

Currently, the official record holder for the hottest pepper in the world is Carolina Reaper which eclipses Bhut Jolokia at 1,400,000 to 2,200,000 SHU. Carolina Reaper has more than double the heat of ghost pepper.  Trinidad Scorpion, Butch T, Naga Viper, and Common Pepper Sprays are also hotter than Ghost pepper. There are also new entrants, namely Pepper X and Dragon’s Breath which are hotter than Carolina Reaper but still not yet officially recognized.

What color is a ghost pepper?

The original variety of Bhut Jolokia from India ripens from green to deep red. They may also take colors like yellow, and orange depending on their stage of ripeness. A few of the modified variants of this pepper also come in pink, purple, white, and yellow colors when ripened

Which is hotter habanero or ghost pepper?

With a Scoville score of 1,041,427 SHU, the ghost pepper is about 6 times hotter than a habanero pepper which has ranked up to 575,000 SHU on the Scoville Scale.

For further reading, have look at the other super hot peppers Fatalii Pepper and Dragon’s Breath Chili in other articles here.