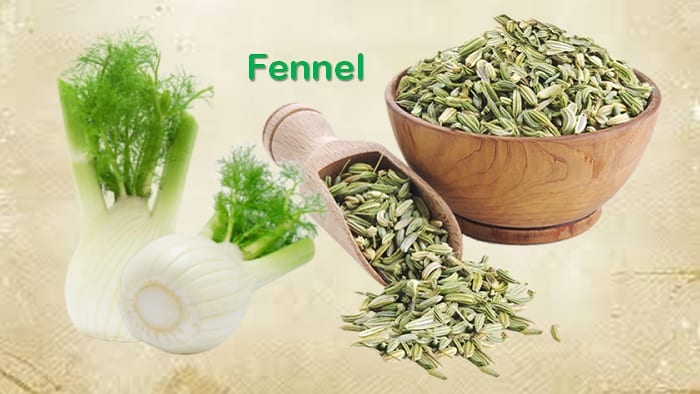 Fennel seeds, bulbs, or fronds are a common ingredient in several recipes.  Fennel allergies are rare, sadly, they do exist for a few; in such a situation you’re compelled to find a replacement for this spice. For another instance, you badly need fennel seeds in your recipe but you have none. Obviously, in such a scenario you should get a ‘fennel seeds substitute’ to save your recipe.

In this article, I have listed an arsenal of replacement options to manage your cooking without fennel seeds.

TABLE OF CONTENTS
Fennel Seeds: An Overview
What does fennel seed taste like?
What are the uses of fennel seeds in cooking?
Best Fennel Seeds Substitutes

Fennel is a member of the Apiaceae (carrot or parsley family) and is related to cumin, anise, dill, and caraway. They all bear aromatic fruits that are generally called seeds.

Fennel cultivation seems to have originated in southern Europe but now they are commercially cultivated around the world.

The roots and stalks of fennel are edible vegetables and seeds are a popular spice. The seeds look very similar to cumin but are slightly larger and greener, with ridges.

Typically, fennel is sold as whole seeds, but you can also get it as a powder as well.

The flavor of the fennel is slightly sweet but has a strong tone of licorice-like taste. The unique, sweet, and herbaceous taste of fennel is very similar to anise. This seed adds mild sweetness and warm fragrance to dishes.

The seeds, bulbs, and fronds have innate differences but all parts of the fennel plant share a similar flavor. However, the strongest flavor concentrate exists in the compact kernel of seeds.

Related article: What can I use instead of fennel bulb?

What are the uses of fennel seeds in cooking?

Like most spices, fennel is not a significant source of nutrition.

Fennel occupies a key position in French and Italian recipes. Today, numerous recipes across the globe use fennel for its sweet and warm taste and aroma.

Over and above, it is the most pronounced flavor in popularly used Chinese five-spice powder. Traditional foods like sausages, pasta sauces, and meat dishes contain this seed in both ground and whole form.

This spice is a delicious addition to cooked whole grains, fish or poultry dishes, and many other recipes.

Besides cooking, fennel is extensively used as a herbal medicine for all types of digestive distress.

You won’t deny the importance of fennel for adding flavor to sauces, fish, and meat dishes. If you’ve run out of it or want to try something else, then here are a few fennel seed substitutes worth trying. I can assure you that you won’t be disappointed with them.

Anise and fennel are two different plants but their seeds have quite an identical flavor. Some say that it’s hard to distinguish them for similar their taste.

Of course, anise is much smaller in size and slightly more pungent than fennel. Use anise in less quantity while using it as a swap for fennel. Just like the fennel, you can use anise seeds as a whole or ground.

The root of licorice and fennel seeds have a similar taste; most chefs use them interchangeably or together.

Licorice is known for its versatility as it goes well with both sweet and savory dishes.

Use licorice root as a whole or ground form. Usually, you have to steep the root in boiling water for a few minutes and then use this water to flavor your dish after straining. The intensity of flavor increases the longer you steep it in boiled water.

Fennel and caraway are relatives as they belong to the same family of plants with similar appearances and tastes. They both have a strong note of licorice. Caraway, also known as meridian fennel, and the seeds are often used whole. This seed also has a close resemblance to anise seeds in flavor.

The downside of using caraway in place of fennel is its nutty taste. Also, it is not as sweet as fennel seeds.

Some chefs prefer to moderate the caraway flavor by cooking the dish with caraway seeds but remove them before serving.

While substituting, start using caraway in just half the amount of fennel required by your recipe; if needed add more in the latter part of cooking.

Dill has a distinctive taste that has some similarities to fennel and celery. It has a citrus-like taste, with a slightly grassy undertone.

Surely, it isn’t a perfect substitute for fennel, but in emergencies, you can use it in fish dishes. Similarly, dill can take the place of fennel in salad dressings and sauces.

Use the fresh or dried dill seeds. As a substitute, use it in the same quantity as you use fennel in your recipe.

Undoubtedly, there is no better substitute for fennel than anise and licorice root.

If you don’t have any one of the main substitutes at hand, other secondary options are cumin and mahlab. Cumin works well for garnishing, and for adding texture to salads, sauces, or soups. Mahlab with its sweet and sour mix of flavor is a good substitute option in sweet or savory dishes.

What can I use instead of carom seeds?

What would I use instead of nigella seeds?

What can be used instead of fenugreek?

What are the possible substitutes for each spice?

What is mahlab Spice?