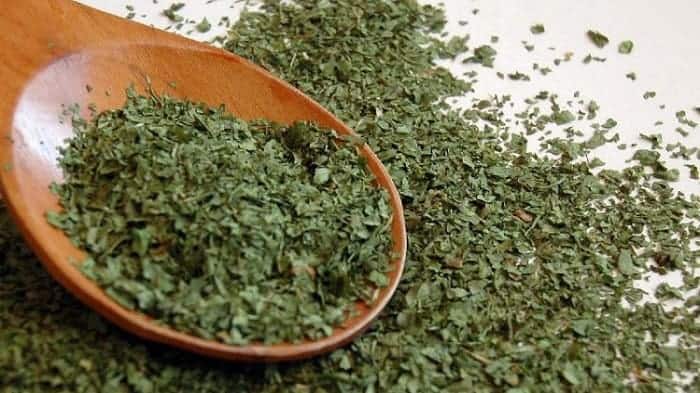 Drying cilantro isn’t a good idea for this delicate citrusy herb loses most of its flavor after drying.

Cilantro is a biennial plant that means it grows leaves in the first season, and then it flowers and dies in the second. Thus it might become necessary for you to dry the excess harvest of cilantro for future uses.

TABLE OF CONTENTS
How To Dry Cilantro?
FAQs

How To Dry Cilantro?

Drying is the easiest method to store cilantro for a considerably long period; up to 3 years. In fact, drying an herb like cilantro is not at all a difficult thing. The only concern is that you have to wisely choose and follow the right method of drying herbs.

Begin prepping the fresh cilantro by washing it in small bunches with a colander. After washing, remove the water from leaves by using a salad spinner or by patting dry with a paper towel.

Always use the freshly harvested herbs for drying. Do not dry refrigerated cilantro; also avoid refrigerating the dried cilantro.

Here are the four methods to dry cilantro:

Air drying is a traditional cost-effective method of drying any herb like cilantro, parsley, and others.

Before air drying, thoroughly wash and clean the sprigs of leaves in running water and pat dry them with a paper towel. Tie up 5 each sprig of cilantro leaves with twine or string. Hang the tied bunches of cilantro upside down on a line in a well-ventilated dry place and away from direct sunshine.

Enclose the hanging bunches of leaves in a loose paper bag for protecting the leaves. It helps to catch the leaves that fall off while drying and to prevent the formation of mold on leaves.

In the air-drying method, about two to four weeks is required for properly drying cilantro.

Related article: Can you freeze cilantro?

A food dehydrator is specifically useful for drying herbs and vegetables. In fact, the finest quality dried herbs can be made by using dehydrators than other methods.

After cleaning and drying the cilantro leaves, place them in the trays of the dehydrator. Without piling up the leaves, keep them in a single layer. The warm air circulating in the dehydrator removes the water content from the leaves.

Make sure to keep the temperature settings of the dehydrator below 110 degrees Fahrenheit. Usually, it takes 1 to 2 hours for the cilantro to be perfectly dried in the dehydrator. After one hour check the dryness of the leaves and then test the dryness after every 30 minutes till the leaves are sufficiently dried.

Method 3: Cilantro Drying In An Oven

Before using the oven, properly wash and clean the leaves and pat dry them with a paper towel. Place the leaves on a cookie sheet or baking tray that you have lined with parchment paper. Don’t pile up the leaves but place them in a single layer.

Preheat the oven at the lowest temperature setting; usually, it varies in different ovens between 170 to 200 degrees Fahrenheit. After preheating the oven for three minutes, place the cookies sheet or baking tray with cilantro in the oven. Even at the lowest temperature oven might become too hot to the extent of burning the delicate leaves of cilantro. In such a scenario, leave the oven door open to reduce heat via air circulation and let out the evaporated moisture from the leaves. Normally, it takes not more than 30 minutes to sufficiently dry out the leaves in the oven.

Using a microwave is the fastest way to make dried cilantro within a few minutes. Obviously, its quality is not going to be anywhere near to the air tried herb.

After cleansing the cilantro, place it on a paper towel and cover it up with another paper towel. Now, allow the microwave to run high for two minutes, after that place cilantro in the microwave. After two minutes open the door to let the moist air out and allow the machine to cool down for a minute. Check the dryness of the leaves, if not sufficiently dried continue microwaving in 30-second bursts and repeat the burst till the leaves are sufficiently dry and brittle.

How to preserve or store dried cilantro?

After drying the cilantro, store it in a sealed, airtight jar, preferably a glass container, until you want to use it. For preserving, you can store the dried bunch as a whole or crumble the dried leaves into the container. The dried cilantro can stay intact for up to 3 years.

Is it better to freeze or dry cilantro?

Freezing is a better option to preserve flavors of cilantro than drying. The unique flavor of cilantro stays fresh for few months in frozen condition. However, drying cilantro gives it a longer shelf life but it robs the herbs of its signature flavor.

Is dried cilantro any good?

Is dried cilantro and coriander the same thing?

Do you have to cook dried cilantro?

Generally, all dried herbs are best rehydrated and added to the dish about 20 minutes before the end of cooking. Dried cilantro has a mild flavor and delicate texture, therefore it’s better to use it towards the end of cooking. Try mixing dried cilantro with 1 tsp oil and leaving it for 10 minutes before using it in sauces, marinades, or dressings.

Can you substitute dried cilantro for fresh?

What Is Bouquet Garni?