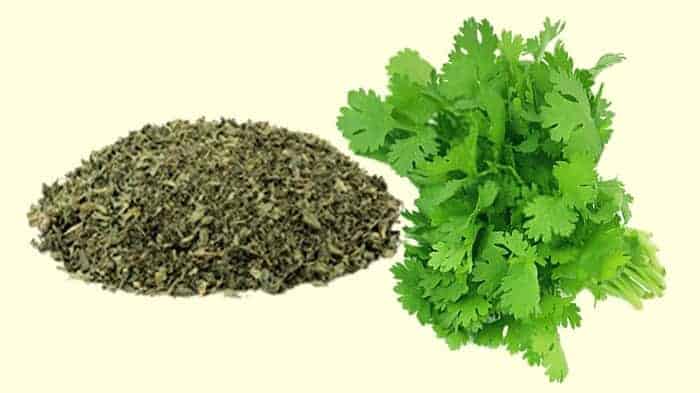 Cilantro has different meanings in different places. In English, it refers to the leaves and stems of the coriander plant, aka coriander leaves.

The fresh, lacy green leaves of this herb provide a slightly spicy, citrus-like flavor and are a common ingredient in Asian and Latin American cuisines. It’s often used in Mexican-style salsa and soups.

Most fresh herbs lose their taste and texture when dried. But some herbs, like basil and oregano, are equally flavorful when you use dried and fresh.

Let us see here the difference between dried and fresh cilantro and how to use them.

CONTENT
Fresh cilantro vs dried
Can I use dried cilantro for fresh?
Different uses for cooking
FAQs

Almost every herb tastes best when it is used fresh. Usually, delicate herbs lose most of their flavor and aroma when they are dried. For example, herbs like tarragon, parsley, mint, chives, and dill are recommended to be used fresh.

Does fresh and dried cilantro have the same flavor? No. Cilantro is a delicate herb similar to parsley. Fresh cilantro has a strong, pungent aroma and a citrusy flavor. But when they are dried, the pungency is almost completely lost. Certainly, cilantro lovers would never be happy with its dried version. However, those who dislike fresh coriander leaves for their strong soapy flavor may enjoy the mild flavor of dried cilantro leaves.

Dried cilantro leaves lose the fine nuances of the fresh herb, including flavor.

Fresh herbs have more nutritional value, but dried herbs usually have more antioxidants in them.

As a plus point, dried cilantro has a long shelf life, but fresh leaves begin to wither away after a day. Properly stored, dried cilantro leaves will usually stay at their best quality for about 1 to 2 years.

Dried cilantro is great for making seasoning mixes that include dry herbs and spices like cilantro seasoning or Chimichurri.

Can I use dried cilantro for fresh?

Many wonders if they can use dried cilantro in place of fresh cilantro or the other way around. It is mostly determined by personal flavor preferences.

If you are fond of the strong flavors of fresh cilantro, then its dried version is not your cup of tea. Dehydrated cilantro is not a worthy substitute for farm-fresh green cilantro leaves. In fact, this herb is most satisfying when eaten raw. For a better choice, have a look at the cilantro substitute options we have on another page.

For some, the strong flavor of cilantro isn’t appealing. For them, dried cilantro with a mild flavor would be more palatable than the fresh herb. But for most people, using dried cilantro instead of fresh is as good as omitting the herb entirely.

If you need to use dried cilantro in place of fresh, a good general rule of thumb is 1:2.

Obviously, dried cilantro cannot be used in every recipe in the same way as you use fresh leaves. The dried leaves are suitable to be used in dishes that require longer cooking times or in marinades where the pungency and aroma of the herb are less important.

As a matter of fact, dried herbs need to be cooked for some time for the best release of flavor and their proper integration into the dish. Contrarily, fresh herbs like cilantro and parsley lose their flavor when cooked, so use fresh cilantro at the end of the cooking process. Always add dried cilantro to your dish while it’s being cooked because this allows a better infusion of flavors into the dish.

Dried cilantro is not suitable for dishes like banh mi sandwiches, lime shrimp, green sauce, and others, which have a distinctive fresh cilantro flavor as their characteristic flavor.

What is dried cilantro called?

How to dry cilantro leaves?

Dry cilantro in an oven or through the traditional method of air-drying. To dry it in the oven, spread the leaves on a cookie sheet with baking spray to help with sticking. The leaves are placed in the oven on a cookie sheet and dried out for 25–30 minutes at 250 degrees F. Stop drying when leaves are sufficiently dried and before they turn dark and burnt.

Is dried cilantro as good as fresh?

No. Dried cilantro has very little flavor and nutritional value. It isn’t worth using dehydrated cilantro in place of fresh leaves if you are looking for the authentic pungency of fresh cilantro.

Can you use dried cilantro in guacamole?