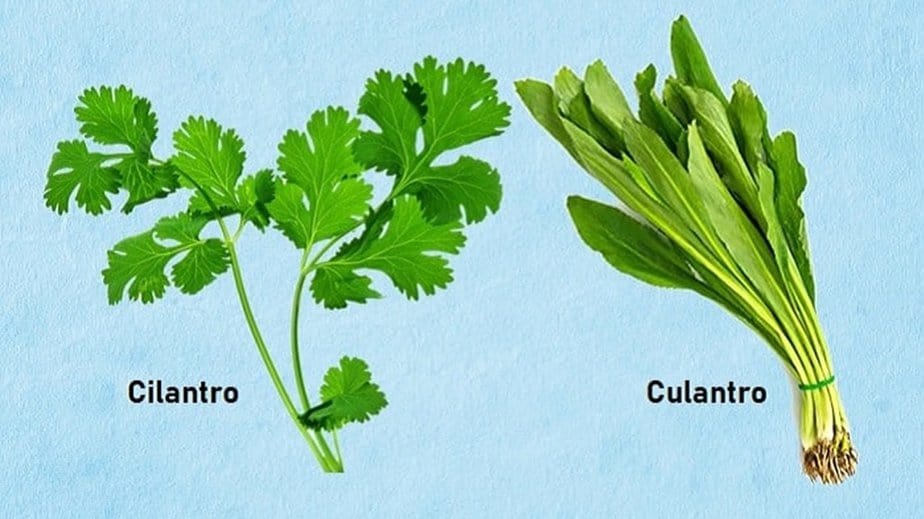 The similarities and differences between culantro and cilantro are quite confusing. Those who aren’t very familiar with these two herbs often mistake them for being the same. In fact, the confusion becomes all the more profound as they both have similar-sounding names with slight differences in spelling.

This article focuses on a “cilantro vs. culantro” comparison. Let’s take a look at similarities and differences between these two herbs in flavor, appearance, uses, and benefits.

TABLE OF CONTENTS
What is Culantro?
What is Cilantro?
Culantro Vs Cilantro
Can you replace culantro with cilantro?

The plant Eryngium foetidum or culantro is native to Mexico, Central America, and the Caribbean.

It has long, waxy, green leaves with serrated edges, and they have a spicy aroma like cilantro. Its flavor and aroma are similar to cilantro but several times more intense.

You’ll find culantro leaves mostly used in Caribbean and Latin American dishes. These Vietnamese and Thai dishes like noodles, soups, and stews do make use of these leaves.

Culantro has a strong pungent odor stronger than cilantro and transfuses a mild bitterness into the dish. It is not everyone’s cup of tea because of its soapy flavor. Its odor is often compared to burnt rubber or crushed stinkbugs.

Leaves and stems of culantro plant are used fresh in salsas, marinades, and chutneys, or added to soups, sauces, and stews. It is the chief ingredient in “sofrito” or “recaito,” a chutney base for soups and stews.

It is also a well-known medicinal herb expected to help with flu, constipation, and fever.

Its flavor and aroma are milder and more delicate than those of culantro. In addition, cilantro has a citrusy flavor yet an earthy tone.

This leafy vegetable is widely cultivated and commonly used in numerous dishes across the world. Their leaves are best added to your dish either raw or near the end of the cooking process to keep their flavors intact.

In many cuisines, often they add cilantro in dishes like salsas, soups, marinades, and as garnish. It’s a regular ingredient in Indian, Middle Eastern, and Asian meals like curries and masalas.

Often, culantro is mistaken for cilantro as they both have a similar flavor and aroma. Despite the similarly spelled names, they are two different herbs belonging to the same family of plants.

Culantro is more commonly grown in the Caribbean and Latin America, whereas cilantro is grown in several regions across the world. Let us look at their similarities and differences in detail.

Similarities between cilantro and culantro

Like parsley, these herbs are members of the Apiaceae family of plants. Culantro and cilantro are true green herbs that grow in similar conditions, especially in tropical zones.

They have similar tastes and aromas. However, culantro has a much stronger flavor than cilantro. Cilantro goes well with most recipes that call for the former. Always use cilantro in larger quantities, and if it’s other-way use less culantro .

In short, culantro and cilantro look different, but they have similar uses in different cuisines; they add depth of flavor and an intense aroma to the dish.

Main differences between culantro and cilantro

These two leafy herbs are significantly different in appearance, taste, aroma, and uses.

Culantro is a perennial herb, and it will sprout again and again for several years from the same shoot. On the other hand, cilantro is an annual herb that dies off every year and grows fresh from the seeds it produces.

Both of them are green-leafy herbs, but their leaves are vastly different in appearance and texture. Cilantro has small, delicate, lacy green leaves, resembling flat-leaf parsley, but culantro leaves are long, serrated, and look a bit like long-leafed lettuce.

Culantro tastes soapy and tangy flavor and smells somewhat lemony and pungent, somewhat similar flavor to cilantro. Culantro has a stronger flavor than cilantro; indeed, much stronger and more pungent.

Culantro is common in the Caribbean and South American cuisines, unlike cilantro which is more of a Mexican, North American, Mediterranean, and Asian herb.

Usually, culantro is used in cooked dishes and not consumed fresh. On the other hand, fresh cilantro is mostly used for garnishing because its taste dissipates if cooked for a long time.

Cilantro contains vitamins C, A, and K and the minerals potassium and manganese. Culantro is rich in calcium, iron, riboflavin, and carotene; also vitamins A, B2, B1, and C.

Can you replace culantro with cilantro?

Cilantro is soft and delicate; it loses its flavor and texture if cooked for more than a couple of minutes. However, culantro is thick and strong; it can withstand prolonged cooking. While substituting cilantro for culantro, use it in your dishes just before you turn off the fire or as a raw garnish.

Usually, culantro is not eaten raw, whereas cilantro is mostly eaten raw or half-boiled. In most dishes, culantro isn’t a suitable substitute for cilantro, especially in dishes that call for raw cilantro.

The key differences between cilantro and culantro are many. These two herbs are botanical cousins with close similarities in flavor. However, they are very different in appearance and use. Cilantro has a soft texture and mild flavor, whereas culantro has a strong flavor and a rough texture. Cilantro can be used as a substitute for culantro in most dishes, but culantro cannot be used as a garnish like a cilantro.