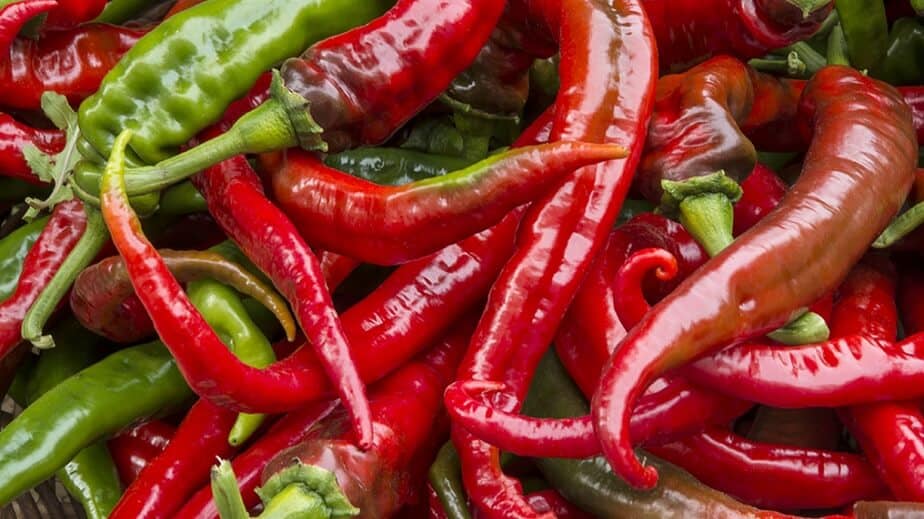 What Are Cow Horn Peppers?

The Cow Horn Peppers are large, thick-walled cayenne-type peppers named for their shape like the horn of a cow. Also known as cow’s horn pepper or cowhorn pepper, they are moderately hot and the fruits turn green to bright red when mature. Usually, the wrinkled peppers are used for sauces and dry ground chili powder.

The cowhorn chili pepper is a type of Capsicum Annuum and a variety of cultivars in the cayenne family of peppers. The origin of this pepper is in New Mexico, USA.

This pepper is one of the giant chilies in the world. It grows up to ten inches in length; basically, huge cayenne pepper in the shape of a cow’s horn. Contrary to its large size, its heat level is rather low which is just enough to provide a sizzling spiciness that almost everyone can enjoy.

Is this pepper spicy? Not at all. The heat level of cow horn pepper ranges between 2,500 to 5,000 SHU on the Scoville scale. Technically, it’s a medium-hot pepper but more appropriately on the upper end of mild peppers. Being a moderately hot chili, it’s everyone’s cup of tea.

I’m sure that you’re aware of the heat level of Jalapeno; this pepper also has the same level of heat though Jalapeno’s heat can occasionally go up to 8,000 SHU the median heat remains around 4,250 SHU. But the common serrano peppers can be up to 3-8 times hotter than Chow’s Horn Chili.

The most distinguishing characteristic of cowhorn pepper is its unusually large size. Usually, its size is about 8-10 inches long and 1 inch wide which dwarfs most other peppers out there. Approximately, the length of this chili is equal to 3 average jalapenos placed in a raw.

The peppers start out as green then turn to deep red as they mature.

They are thick-walled chili peppers in the shape of a cow’s horn. The pods are curvy like the horn, similar to regular cayenne pepper though they differ in size. The outer skin is wrinkly and tapered.

As regards its flavor, it’s mostly fruity, sweet, and moderately hot, and that’s about it. The dried chilies do not have a smoky or earthy flavor as some popular dried chilies do.

What Are Cow Horn Chilies Used For?

Cowhorn pepper is truly versatile for its mild heat, large size, and fruity sweet flavor. Being a large pepper with a thick wall makes it really good for frying and roasting and it adds a chunk of substance to whatever you’re cooking. The sweet simmering heat with a fleshy texture makes cow’s horn pepper excellent for pickling. Similarly, hot sauces and barbecue sauces made with this chili has a smoother sweet taste and enjoyable mild heat.

Contrary to your imagination, this pepper isn’t suitable for stuffing despite its large size and thick walls. On heating, its thick walls shrink drastically; also it’s a highly tapered pepper with little area in its cavity for stuffing.

You can use cow horn pepper for flavoring your dishes; great for adding enjoyable flavor to salsa and chili delicacies.

Commonly, like the other varieties of cayenne peppers, this pepper is also great for trying to turn it into pepper flakes and powder.

You can use this pepper as part of the Cajun Holy Trinity (celery, onions, and peppers) to make dishes like Sausage Gumbo, Cajun chicken, and others. 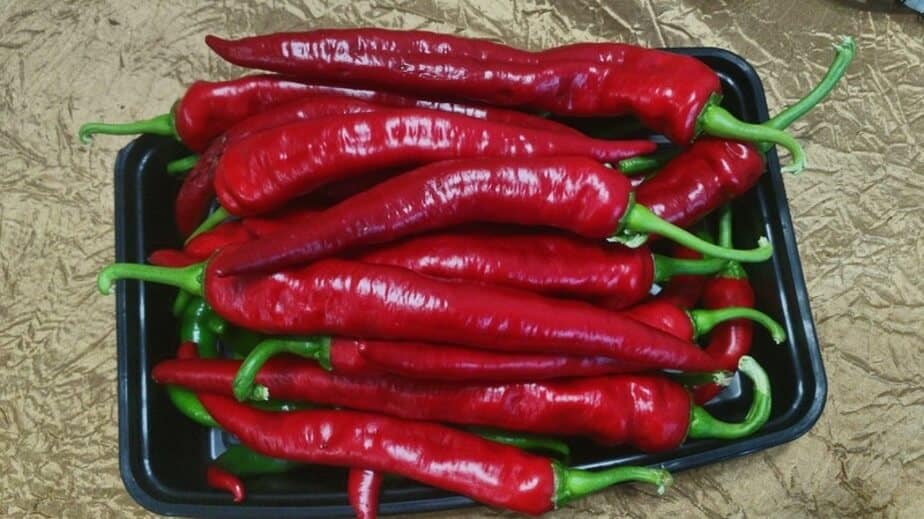 Many are confused with its inclusion in the cayenne pepper family; often cow horn pepper is referred to as cayenne-type pepper or as a cultivar variety of cayenne. In some places, the regular cayenne pepper is called “cowhorn” for its shape.

Basically, cow horn is giant-sized cayenne pepper with an exact tapered shape and color. However, this pepper has its unique flavor and uses.

The biggest difference between them is the heat level; regular cayenne is a hot pepper with heat raging between 30,000–50,000 SHU. Cayenne is 6 to 12 times hotter than cow horn chili. The average length of cayenne pepper is about 5 inches only but cow’s horn pepper is about 10 inches long.

They belong to the same pepper family of Capsicum Annum species which contains a wide array of peppers that can be mild, hot, or super hot, from stocky jalapenos to tiny pequin peppers.

How spicy are cowhorn peppers?

Technically, cowhorn pepper is classified as medium-hot peppers but in reality, its heat level comes in the upper range of mild peppers. On the Scoville scale, its heat level varies between 2,500 to 5,000 SHU and has a fruity sweet flavor. Cow’s horn pepper is comparatively gigantic in size but they aren’t overwhelmingly spicy.

Are cowhorn peppers hotter than jalapenos?

The heat level of Jalapeno peppers varies between 2,500 to 8,000 SHU. Technically, the median heat of Jalapeno is pecked at 4,250 SHU. Overall, both Jalapeno and Cow Horn Peppers are equally hot and spicy, but some varieties of Jalapenos can be two times hotter than cowhorn chili.

Can you eat cowhorn peppers green?

Cow’s horn peppers can be eaten green especially as part of a salad or toppings on salsa, stews, or grilled meat and fish. Mature red peppers are more flavorful and spicy.  Being a thick-walled pepper, it tastes best when roasted, fried, or grilled to be used in sauces, salsas, pickles, and other hot dishes.

How do you know when a cow horn pepper is ripe?

Like the regular cayenne pepper, the fruits ripen from green to red. When fully mature the peppers take a deep red hue and the tail end of the fruits curl like a steer’s horn. The outer skin of the pepper becomes glossy and the walls turn harder and offer a good crunch.

Can I freeze cow horn peppers?

Yes. It is possible to freeze cow horn pepper without blanching unlike most other vegetables and chilies need to be blanched before freezing. This pepper has a tougher skin and thicker wall, for this reason, they do not turn mush when thawed. However, the frozen peppers lose their crispiness though the flavor remains intact for the most part.

Can you dry cowhorn peppers?

Yes. In fact, most varieties of cayenne peppers, including Cowhonrs are mostly used in dried and powdered form. It’s best to dry them on a parchment-lined baking sheet at low temperature; approximately in 1.5 hours, you can dry the pepper at 185 degrees Fahrenheit. Don’t dry them at a temperature above 200 degrees Fahrenheit or they’ll burn.

For further reading, follow the link to find out all facts on Corno Di Toro Pepper on this blog.