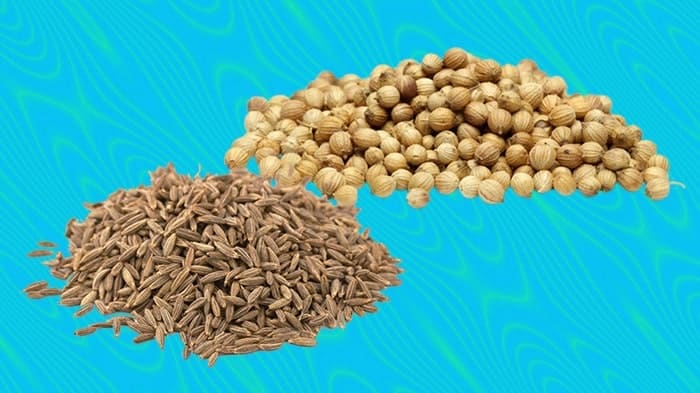 Cumin and coriander are flavorful and aromatic spices often paired together in recipes. They are often confused for they have similar uses in cooking and are frequently used together. But the real differences between coriander and cumin exist in their flavors and benefits.

These two spices are a quintessential part of Indian cooking, especially in Indian curries. Also, both of them are loaded with several health benefits and have many medicinal uses.

This article reviews the differences and similarities between cumin and coriander.

In this article, we are talking about Cuminum cyminum, the most commonly used type of cumin in cooking.  Black cumin (Nigella sativa), and bitter cumin (Cuminum nigrum) are the other two varieties of cumin occasionally used in cooking.

Cumin seeds are the fruit of cumin (C. cyminum), a flowering plant in the family Apiaceae. Fully matured seeds of cumin are small, brownish-yellow, boat-shaped seeds with pale stripes, and they are almost similar to caraway and fennel seeds in appearance.

Coriander is an annual plant in the family Apiaceae. The fresh leaves and stems of this plant are called cilantro or coriander leaves whereas the dried seeds are known as coriander seeds, cilantro seeds, coriander spice, or simply coriander. From place to place, the term “coriander” is confusingly used to refer to the seeds or leaves of the Coriandrum sativum plant. In general, “coriander” refers to dried seeds. To avoid confusion, the rest of this article refers to the dried seeds as coriander.

Coriander seeds are round in shape with a creamy brown color and are very lightweight. They are small soft seeds with a crunchy texture and mostly the coarsely ground seeds are used in cooking. If you are using ground spices, you can distinguish coriander by its brighter yellowish-brown coloring compared to the dark brown-yellowish color of cumin powder.

Cumin and coriander are two versatile spices and are highly compatible with each other. Often, most recipes that call for coriander also include cumin as an accompanying ingredient. The gentle sweetness of coriander balances the mild bitterness of cumin. The warmer and darker flavor of cumin can be mellowed down with a lighter and brighter flavor of coriander.

The most evident contrast between cumin and coriander is their shape. Cumin seeds are flat and have a narrow elongated shape while coriander seeds are round with lines.

To compare these two spices better let us look at their similarities and differences in detail.

Similarities Between Coriander and Cumin

Coriander and cumin are botanical cousins belonging to the Apiaceae family of plants.

Both of them are spicy and provide an earthy note to dishes. They have intense, concentrated flavors, for this reason, they are used similarly in cooking. Cumin and coriander have agreeable flavors that make them pair well in most recipes.

These dried seeds can be used either whole or ground; they have a shelf life up to 3 years. Often, they are toasted or sautéed before use for it turns them highly aromatic and spicy.

Differences Between Cumin and Coriander

Cumin and coriander have similar culinary uses and they have intense flavors. Despite the similarities, each herb has its own distinctive flavors and unique features that make them totally different spices. Let us look at the major differences between coriander and cumin.

Cumin is the dried seed of the herb Cuminum cyminum, a member of the parsley family (Apiaceae). Coriander (Coriandrum sativum L.) is a spice obtained from the plant belonging to the family Umbelliferae (Apiaceae).

Do cumin and coriander have the same flavor? No, they have distinct flavors with hardly any similarities except the slight heat and earthy flavor they both render.

Cumin is slightly warmer and robust in flavor with slight bitterness while coriander has a slightly lighter and brighter flavor with a bit of sweetness. Cumin seeds are strongly aromatic and have a complex flavor than coriander.

Coriander seed is used extensively in Indian, Middle Eastern, and Asian cuisines. In the west, coriander seeds are used for flavoring drinks, soups, cocktails, and brines.

Cumin is a key ingredient in Indian curries, Middle Eastern specialties such as hummus, and Mexican dishes like fajitas. Ground cumin is also a part of several Mediterranean and American seasoning blends.

Cumin is an aromatic spice often used in spice blends and rubs whereas toasted cumin seeds are often used to temper dishes. Cumin is a widely used spice in numerous recipes across the world.

Both these spices are loaded with beneficial nutrients, vitamins, minerals, and antioxidants. Cumin is said to have more health benefits to offer than most other spices including coriander.

In traditional remedies, coriander was used for the relief of gastrointestinal maladies. In herbal medicines, coriander is used as an aphrodisiac, antibiotic, a remedy for respiratory ailments and pain, and for improving appetite and memory.

Cumin and coriander, in seeds and ground forms, are easily available in most groceries. In supermarkets, usually they are available at the Indian spices aisle. However, coriander is most popular in Asia, especially in Indian and Middle Eastern cooking. On the other hand, cumin is a regular ingredient in most spice blends across all cuisines, thus easier to find them everywhere.

Can I substitute coriander for cumin and vice versa?

Cumin is one of the best substitutes for coriander seeds for they both are warm and slightly spicy to give a similar type of flavor to your dish. Both are versatile ingredients that work well in the same type of dish.

However, coriander cannot be used as a replacement for cumin in all types of dishes. For example, in savory dishes, the sweetness and lemony notes of coriander cannot replace the spicy and bitter flavor of cumin needed in them.

In emergencies, ground cumin can swap out ground coriander in some recipes though not a perfect option. The sweetness of coriander and bitterness of cumin are two contrasting flavors that cannot be substituted for each other but they can coexist in the same recipe. Using ground coriander in place of ground cumin will greatly impact the overall flavor profile of the dish.

If required, replace coriander in your recipe with ¾ part of cumin.

Can I use cumin as a substitute for carom seeds?

Is cumin a good replacement for nigella seeds?

What ingredients can I use instead of cilantro?

Chart of all the spices and their substitutes