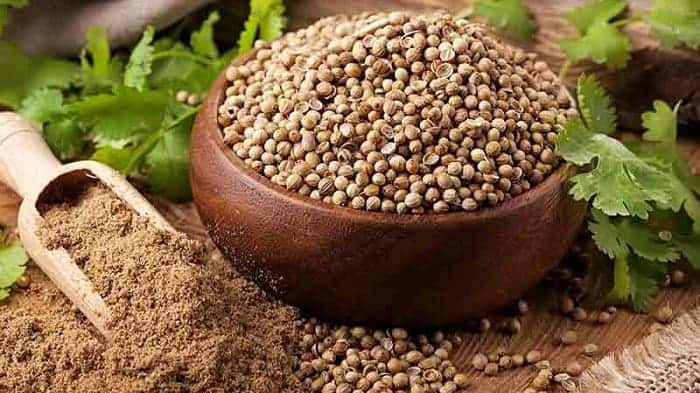 Coriander seed is one of the oldest known spices in Asian cooking, especially in Indian and Middle Eastern cuisines.

Coriander seeds are dried seeds of coriander or cilantro plant which can be used whole or ground. Its flavor is earthy, tart, and sweet and when toasted it releases a floral aroma. Coriander flavor is somewhat similar to sage, caraway seeds, and lemon.

This aromatic spice pairs well with chili and garlic. It goes well with most recipes like meat, fish, curries, sausages, and vegetables.

Most recipes call for ground coriander and whole seeds are mostly used in pickling and drinks.

Coriander is a versatile spice with unique flavors and it isn’t easy to find a perfect replacement. Taste-wise, any spice with nutty, peppery, and lemony flavor profiles can be a worthy alternative to coriander. Despite its unique taste, coriander can be swapped for several other spices and herbs.

If your recipe calls for whole or ground coriander seeds and you don’t it then we have here some excellent coriander replacements for you.

Here are some of the best coriander substitutes:

Garam masala is a blend of ground spices, originating from the Indian subcontinent. It is a common ingredient in cuisines from Indian, South Africa, and Mauritius.

Garam masala is used alone or with other seasonings.

As Garam masala contains coriander as an ingredient, it works as a subtle replacement for coriander.

Cumin is a flowering plant in the family Apiaceae, native to southwestern Asia including the Middle East.

Cumin seeds are dried and used in the cuisines of many cultures either as whole or ground form.

Cumin is a necessary ingredient in a wide variety of recipes of meat, stews, soups, and curries.

It is also an important ingredient in many spice seasonings. Because of its versatile flavor, it is an excellent substitute for coriander.

Importantly, cumin has a mild nutty, spicy and hot flavor which is very much akin to coriander.

Curry powder is a spice mix originating from the Indian subcontinent.

It contains a mix of spices including coriander. Other common ingredients in curry powder are chili, fenugreek, ginger, and turmeric.

This spice mix gives both a sweet and savory taste to curry.

Curry powder adds a warm flavor to recipes like roasted vegetables, curries, and marinades. It has a hot flavor similar to coriander seeds.

As this spice mix contains coriander, it works as a ready-to-use substitute for coriander seeds.

Curry powder with many ingredients gives a powerful flavor. While you use curry powder as a replacement for coriander, use it in small amounts.

Caraway, also known as meridian fennel and Persian cumin, is a biennial plant in the family Apiaceae, found across the world.

Caraway has a flavor that closely resembles coriander.

In fact, you can easily substitute coriander with caraway without much difference to the flavor profile of your dish.

Caraway and coriander contain the same aromatic oils, namely pinene and linalool. This is what makes them similar in flavor and aroma.

The caraway seeds are used as a whole or in grounded form. It fits well into the recipes of casseroles, desserts, vegetable dishes, and baked goods.

It should be noted, caraway has a stronger flavor than coriander. It’s best to use caraway in small quantities while using it instead of coriander.

Cumin and Oregano: Equal parts of cumin and dried oregano is a wonderful alternative to coriander, especially in marinades, Indian curries, and vegetable dishes. The earthy and spicy flavor of oregano with a mild sweetness is somewhat similar to coriander.

Whole Cloves: When you have run out of coriander, you may use whole cloves instead, especially in marinades, pickles, and herbal drinks. Cloves have a citric punch like coriander and showcase coriander’s sweet earthy qualities. Ground cloves work well as a swap for coriander powder.

Fennel seed: An emergency replacement for coriander could be fennel seed. It has a natural sweetness similar to licorice and cilantro because of the substance anethole. However, the fennel lacks the lemony notes of coriander and may bring in some unwanted bitterness.

Note, it is always best to grind the coriander seeds just before use because ground coriander tends to diminish in flavor when stored for a few weeks.

Most recipes call for ground coriander and not the whole seeds. If you have run out of coriander powder but have coriander seed, then grind it in a spice or coffee grinder or use a mortar and pestle. Otherwise, go for the traditional method of using a rolling pin to grind the coriander seeds.

For using the rolling pin, place the seeds in a sandwich bag, and roll them until they turn into powder. This powder will be coarser than the one you make with a spice grinder, but that doesn’t matter much. Alternatively, you can also use a grinding stone to turn the coriander seeds into a paste that works perfectly for Indian curries.

Is ground coriander a good substitute for cumin?

Can I use curry powder in place of garam masala?

What is a good alternative to caraway seed?