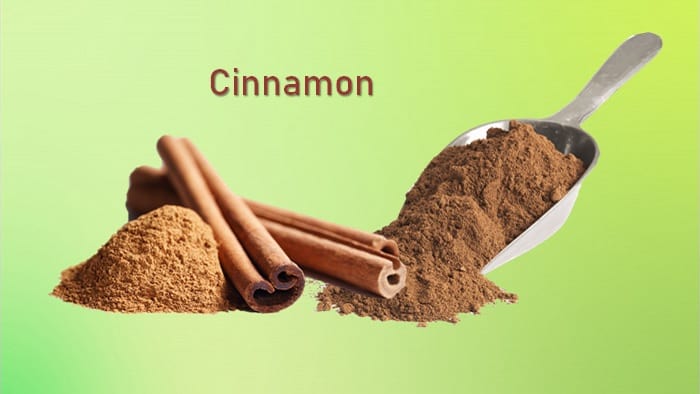 Cinnamon is a quintessential spice that you can’t miss out on for its several culinary uses. However, at times it becomes necessary to find a suitable cinnamon substitute.

In this article, I’ll bring home to you some of the best ingredients you can use in place of this spice.

CONTENT
Cinnamon Overview
What is the Taste of Cinnamon?
Uses of Cinnamon in Cooking
Best Cinnamon Substitutes
The Bottom Line

Cinnamon is a spice obtained from the inner bark of several tree species from the genus Cinnamomum.  Mostly, two verities of this spice are used in cooking, namely, Cinnamomum verum (Ceylon/ true cinnamon) and Cinnamomum cassia.

Recent studies suggest that Ceylon cinnamon has better health benefits and is much safer to use if you eat a lot of cinnamon. Cassia contains a lot of coumarin, which can cause toxic effects in the body if consumed regularly or in large quantities.

Cinnamon has been known from remote antiquity for its numerous uses. Once upon a time, it was one of the precious gifts offered to deities and monarchs.

Cinnamon comes from the inner bark of a cinnamon tree; used either as sticks or in ground form.

What is the Taste of Cinnamon?

A sweet and woody flavor, cinnamon has a slight citrusy note. Its spicy flavor is somewhat similar to the powerful punch of cloves.

There is no difference between the flavors of cinnamon sticks and ground cinnamon except the texture.

Cinnamon loses the flavor gradually over a period but not as fast as several other spices. Ground cinnamon that’s 2 years old won’t carry as much flavor as cinnamon that’s only three months old. It retains most of its flavor even in lengthy cooking at high flames.

Uses of Cinnamon in Cooking

Undoubtedly, cinnamon is one of the most commonly used spices across the world.  It’s used as a flavoring additive in a wide variety of cuisines, breakfast cereals, traditional foods, and sweet and savory dishes. A fine aromatic condiment extensively utilized in baked goods ranging from cookies to snacks.

Because of its fine form, the ground cinnamon is easily incorporated into dishes. Whereas, the sticks or whole barks are more often used to infuse liquids such as milk or cream. Sticks are also used in some traditional meat recipes like biryani, kebabs, and more.

Some prefer to use cinnamon sticks because the sticks can be removed after infusing the flavor. This helps in retaining the original texture and color of the dish.

You may want to find a substitute for cinnamon for reasons like ‘cinnamon allergy’, lack of availability, or for the sake of the appearance of your dish.

Fortunately, it’s easy to find a few replacements for cinnamon in your pantry.

For an emergency alternative to cinnamon here are few good substitutes for you:

Allspice is actually the dried unripe berry of the Pimenta dioica tree,

Allspice and cinnamon are very different in their origin and appearance. Despite the several differences, both these spices have a lot in common when it comes to their taste and aroma.

Allspice tastes like a blend of cloves and nutmeg with an undertone of cinnamon. This spice of multiple flavors easily fits into any recipe that calls for cinnamon.

Cinnamon has a mellower flavor, while allspice has a stronger flavor and therefore, use allspice in less quantity.  When replacing cinnamon with allspice use only 1/3 portion of cinnamon that your recipe calls for.

Cinnamon extract is made by soaking cinnamon bark in alcohol; it has a strong concentration of flavor. Adding a teaspoon of this extract to your recipe works just like fresh cinnamon.

Either you can procure it from a grocery store or you can make the extract by yourself at home.  For home use, prepare the extract by soaking four cinnamon sticks (15 grams) in ½ cup of mild rum for two weeks.

Note, if you are allergic to cinnamon, this substitution won’t work for you.

A blend of cloves and nutmeg in equal measure is a good alternative to cinnamon. These two spices have earthy tones like cinnamon. Also, the nutty undertone of this blend is a flavorful complement to most dishes.

If you wish, you may also use nutmeg or cloves individually in recipes in place of cinnamon though both together do the best.

Use this spice blend in one-to-one substitution for cinnamon.

Few elements in the flavor profile of ginger like citrusy and earthy flavor somewhat reciprocate flavors of cinnamon. In fact, both these spices do provide a warming effect to your body.

The citric flavor and acidity of the blend of these two spices are quite identical to the flavor profile of cinnamon.

A blend of cloves and ginger in an equal portion is a powerful spice mixture with strong flavors. For this reason, as a substitute, use only about 1/3 part of the cinnamon that your recipe calls for.

Cardamom has a complex flavor. It has some characteristics of cinnamon-like citrusy and earthy notes.

The wonderful flavor of cardamom is a perfect complement to cinnamon. If you notice, most spice mixtures do contain both these spices.

As a substitute for cinnamon, cardamom is an excellent option, especially in savory dishes.

Cinnamon is a dominant ingredient in some of the popular pre-made spice mixtures like pumpkin pie and apple pie spice. Look for spice mixtures that have cinnamon, allspice, nutmeg, and cloves as key ingredients to use as a substitute for cinnamon.

When you have run out of cinnamon and in an emergency you can use one of these spice mixtures instead of cinnamon.

Note, while using a spice blend you have to minimize the use of other ingredients accordingly. Besides, spice blends have a far more strong flavor than cinnamon. So use them sparingly and always start with a small quantity.

Usually, ½ a teaspoon of pumpkin pie spice may be enough to replace 1 teaspoon of cinnamon.

Cinnamon is one of the most commonly used spices in the world that enjoys a royal stature in numerous recipes across the globe.

It’s difficult to mimic the complex flavor of this popular spice, yet you can find its flavor profiles in a few other spices. Nutmeg, allspice, and cloves are the closest substitutes for cinnamon. Ginger and cardamom can also play a second fiddle to cinnamon.

What is chai masala and its possible substitutes?

What can I use instead of berbere spice?

Can I use cinnamon in place of mace?

What is a good replacement for Tandoori Masala?