Is Chocolate Bhutlah a hotter pepper than Carolina Reaper? Officially, the records are in favor of the Carolina Reaper though Bhutlah pepper is said to be the hottest on many accounts. “Stability” is the key to staying at the winner’s spot, perhaps it’s a likely generation away from getting an official shot at the top spot.

Surprisingly, year after year, the list of “superhot” peppers is growing with the advanced techniques of crossbreeding and farming. The question of how hot Chocolate Bhutlah is up for a big debate; whatever may be the outcome, undoubtedly, this pepper is one of the hottest peppers in the world now. This article examines all the important details of this pepper including Scoville heat level, origin, flavor, uses, and more.

What Is Chocolate Bhutlah Pepper?

The Chocolate Bhutlah is a cross between the 7 Pot Douglah and Bhut Jolokia (Ghost Pepper). Being a lineage from the two hottest peppers, this pepper is hotter than both Ghost Pepper and Douglah.

Bhutlah pepper was created by Chad Soleski from Wisconsin; the name “Bhutlah” from an abbreviated synthesis of the names “Bhut” and “Douglah”.

Initially, Chad created Red Bhutlah Peppers, and later on, another chili grower by the name of Steve McLaurin, who is a close associate of Chad, created the chocolate-colored pods. Currently, both Chad and Steve grow both red and chocolate varieties of this pepper.  Thus you’ll find today, Chad’s Chocolate Bhutlah CS and Steve’s Chocolate Bhutlah SM; two varieties of the same pepper.

Like most other super hot peppers, Bhutlah pepper also belongs to the C. chinense species of plants. Within a season, the plant can grow up to 5 feet tall and it spreads out more than 1 meter wide.

The word “chocolate” added to the name of this pepper refers to the color and not the taste.

If you wish to buy Chocolate Bhutlah peppers, they are mostly available for purchase in dry, ground, and flake forms; also you can get its seeds from heirloom seeds sellers. You can easily find the source with a simple online search.

Bhutlah pepper is known for its quick penetrating heat, making it seem hotter than others in the same range. Many people vouch that it’s the hottest pepper they’ve ever eaten. Against the common and humble Jalapeno, Bhutlah chili is up to 800 times hotter.

The pods grow about 2-3 inches in length and have a teardrop shape. The tail end of the pods is usually pointed and overall the skin has small folds and crumbles. They are slightly larger in size than the 7 pot Douglah but look more like the bhut jolokia. They age from green to chocolate brown color and when dried the color changes to dark brown.

Like most other peppers from the Capsicum Chinense family, the Chocolate Bhutlah peppers also have fruity, floral, earthy flavor initially. However, within a few seconds, they begin to emanate scorching heat that will soon numb your tongue and throat. The overwhelming heat of the pepper subdues all other tastes for a minute or two. Its progenitors, the 7 Pot Douglah is fruity and Ghost Pepper is predominantly floral in taste.

What Are Their Uses?

Unlike the regular peppers like Jalapeno, Cayenne, or Serrano, the extremely hot peppers like Chocolate Bhutlah and Carolina Reapers have limited uses in cooking. They are more of a fanciful substance for tasting challenges than for daily cooking needs. In limited quantities, this pepper is used in hot sauces, soups, salsa, and stews. Both fresh and dried pods are used for making very spicy hot sauces. Chocolate Plague is a well-known brand of hot chili sauce made from Chocolate Bhutlah and vinegar. This sauce is a dark, sinister dive into extreme heat with a smoky flavor and strong spice kick. 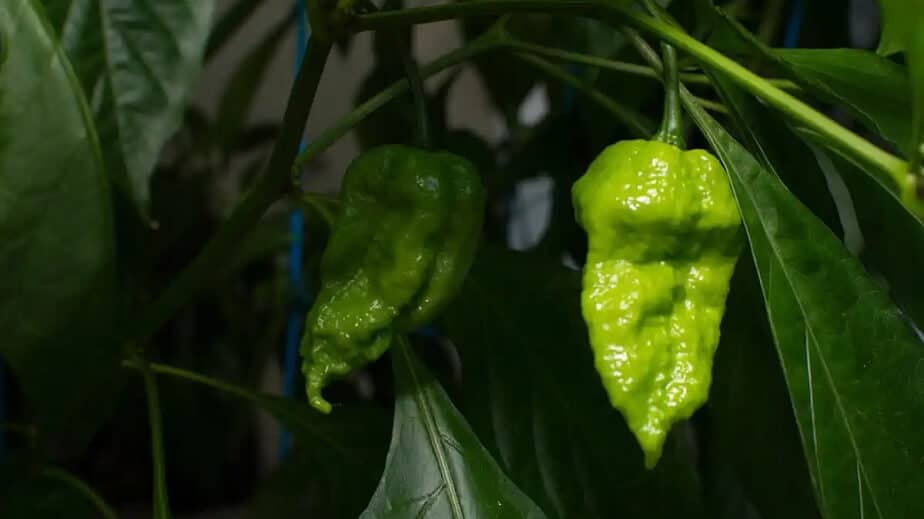 Officially, according to the Guinness Book Of World Records, currently (2022) Carolina Reaper is the hottest pepper in the world with its heat level reaching up to 2,200,000 SHU on the Scoville Scale.  The Chocolate Bhutlah pepper is definitely as close as it gets to being equal.

This pepper has a quick effect by instantly flaring up its hotness as soon as one begins to eat it. For this reason, many think and feel this pepper to be hotter than Carolina Reaper.

Bhutlah differs from Carolina both in look and flavor; the latter is a small red pepper with wrinkly skin and a pointy stinger. The Chocolate pepper is larger and chocolate brown in color and is shaped like a teardrop with smoother skin.

Is the Chocolate Bhutlah the hottest pepper in the world?

As of now (in 2022), Carolina Reaper is still the hottest pepper in the world as per the Guinness Book Of World Records. Unofficially, Pepper X (~3,180,000 SHU) and Dragon’s Breath (~ 2,480,000 SHU) are hotter than Carolina Reaper but they lack consistency. Many expect that soon a genetically modified version of Chocolate Bhutlah would overtake Carolina Reaper.

In appearance, this pepper has a close similarity to Bhut Jolokia (Ghost Pepper) but is larger than 7 Pot Douglas. The pods are 2-3 inches long and have a pointed tail-end. The skin is glossy but has wrinkles and folds and changes color from green to chocolate brown on maturing.

How do you use the Chocolate Bhutlah?

What are the substitutes for Chocolate Bhutlah pepper?

Any pepper that comes between the range of 1,400,000 and 2,200,000 SHU can be a good Chocolate Bhutlah substitute. Carolina Reaper, Komodo Dragon, and Trinidad Scorpion are equally super hot peppers that you can use in place of Bhutlah.

For further reading, follow the link to find out all facts on Chimayo Chile on this blog.