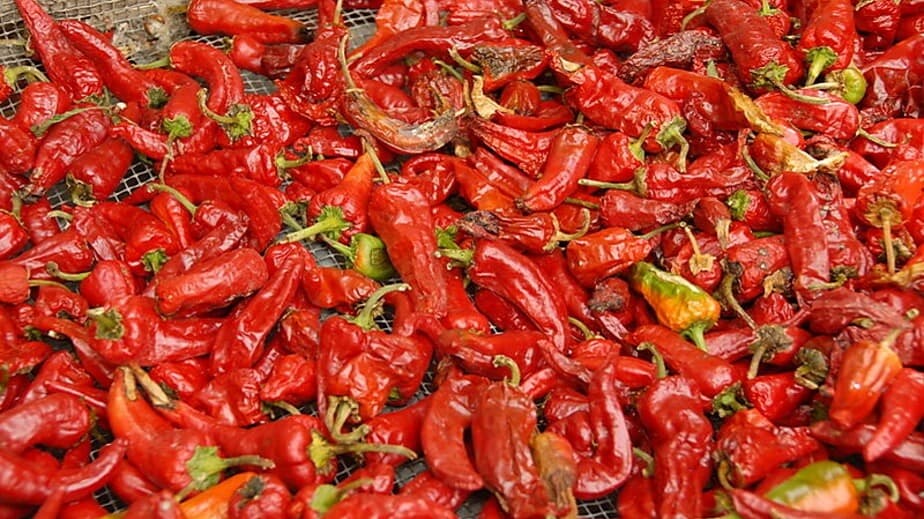 Chimayo chile is a rare pepper from the New Mexico town of Chimayo; mostly used in local cooking as well as in beautiful decorative ristras popular in the native region. Basically, this pepper is an integral part of foods and culture in New Mexico.

This article looks at all important features of Chimayo pepper such as origin, Scoville heat level, flavor, uses, and more.

What is Chimayo Chile?

Chimayo pepper is a twisted, knotty chili traditionally cultivated and relished by the people of Chimayo, a small village in New Mexico. This pepper belongs to the Capsicum Annuum species and is a medium-hot pepper (4,000 to 6,000 SHU) with a distinguishable sun-dried skin and smoky taste.

They say the taste and appearance of this pepper are influenced by the soil and climatic conditions of the unique mountainous region of Chimayo. For this reason, it’s a rare chili that isn’t commercially available outside its original habitat. People of Chimayo, not only use this pepper for cooking but also for ornamental purposes in local celebrations.

According to some rough estimates, only about 500 acres of Chimayo chile is harvested annually, in October and November; a lion’s share of the produce is consumed by the locals themselves.

Chile Chimayo is a native or landrace pepper that is believed to be brought to the land by Spanish conquistadors in the 16th century. The Pueblo Indians, who inhabited Northern New Mexico, adopted this chili as their own, even since it has become a staple in local cooking.

History suggests that different varieties of chiles brought by the Spanish gained preferential importance in different rural localities of New Mexico. As a result, these chiles took on the names—Santa Domingo, Chimayo, Nambe, and Cañoncito to name a few. Those chilies when isolated for centuries in a specific locality, they developed a unique appearance and flavor profile. Of the pack, the Chimayó is considered by many to be the crown jewel.

The heirloom seeds of Chimayo pepper are reverentially passed down through generations. For centuries, it was exclusively cultivated by a small group of local farmers. However, at the beginning of the 2000s, the Chimayo Chili Project was initiated by the local governing bodies to replenish the local seed stock. Today, this vibrant chili has big commercial fame and the produce is dearly coveted by ardent chili pepper fans from across the globe.

The thin-skinned pods are 4-6 inches long and 1.5 inches wide. They change color from green to deep red when matured. Their color can be compared to Jalapeno but they have a crooked and twisted appearance. The arid mountainous regions of Chimayo have above 80 degrees F. heat for the most part of the year, thus the peppers are extremely sun-dried and they develop twisted and knotted skin.

The original peppers from the Chimayo region are quite smoky and earthy but if they are grown elsewhere the taste may vary. They are smokier than Hatch chilies but not so much as buttery in flavor. You’ll experience at first a good bit of sweetness and then lingering mild heat. 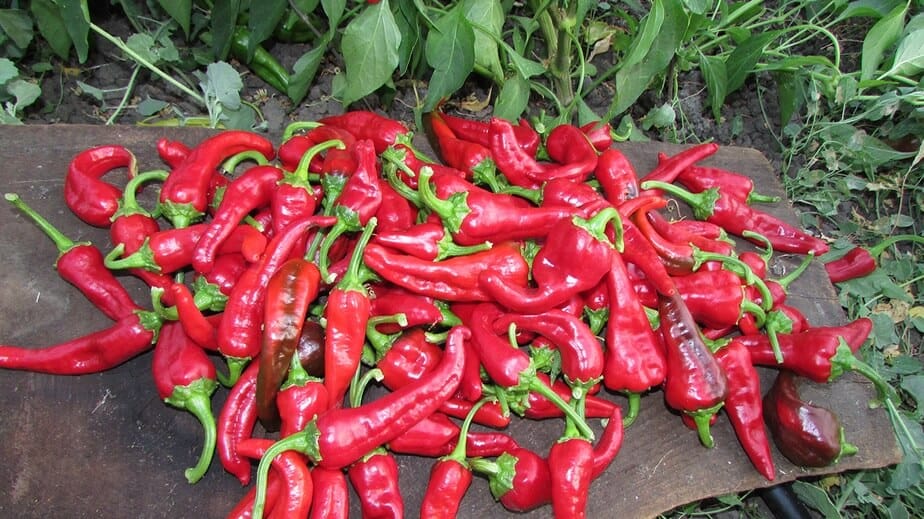 The heat levels of Chimayo chile ranges between 4,000 and 6,000 SHU on the Scoville Scale. Overall, the heat level remains equal to the average heat of Jalapeno pepper. They are hotter than the mildest Jalapeno which starts at 3,000 SHU. The spiciness of this pepper is comparable to its New Mexican chili cousin, the Hatch pepper. Usually, the New Mexican chilies have at least double the heat of the common Anaheim Pepper.

Whether eaten dried, flakes (called caribe), roasted, fresh, or ground into Molino, Chimayo chiles bring in a distinctive flavor to a wide array of New Mexican dishes, where chiles are important. You’ll find them used in posole (hominy stew), simmering pots of beans, or carne adovada. This chile is commonly used in the roux-based red chile sauce, chile colorado, which is a regular item on almost every Mexican table. The sauce made with Chimayo chile has distinctive sweetness upfront, followed by an enjoyable mild heat that lingers on for a while. Red chile sauce with Chimayos works perfectly for making delicious enchiladas and burritos.

Chimayos are absolutely bright and terrific when roasted for they emanate an earthy, smoky scent that is truly appetizing indeed. They say the roasted peppers have a stronger smoky flavor than others.

Dried and ground chiles are most commonly used in New Mexican cooking. Generally, these chiles are open-air dried using ristras. Then they are made into powder or chili flakes.

In New Mexico, most homes stack Chimayo pepper powder all year round. Exquisite in enchiladas, it maintains its heat and smoky flavor without being overwhelming.

If you love to cook New Mexican dishes, then Chimayo Chile powder is an absolute necessity in your kitchen cabinet. It may not be available at groceries near you but you can buy this chili powder from online retailers.

Chimayo is a moderately hot pepper with heat ranging between 4,000 and 6,000 Scoville Heat Units. They are milder than Chipotle Pepper but equal to the average heat range of Jalapeno Pepper.

What is the history of the Chimayo chile?

The origin of Chimayo chili is traced back to the last decades of the 16th century when the Spanish began settling in New Mexico. The Pueblo Indians who inhabited Northern New Mexico soon adopted the newly arrived chili as an integral part of their cooking and began to grow them as their staple crop ever since.

How hot is Chimayo chile powder?

The heat level of Chimayo chile powder is similar to the raw peppers that range between 4,000 to 6,00 SHU and its heat is lower than the popular Chipotle chile powder. The chile powder maintains the heat without being overwhelming and also retains the smoky flavor to the full extent.

Chimayo chile has a complex mix of sweet, earthy, and smoky flavors. The tasty flavors of many popular New Mexican dishes like posole and Carne adovada heavily depend on this pepper. The unique flavor of this chile is influenced by the special soil and climatic conditions of Chimayo, in New Mexico

For further reading, follow the link to find out all facts on Chile Chiltepin on this blog.