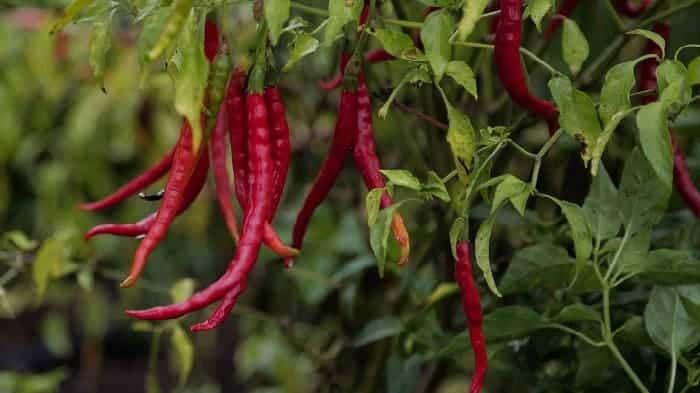 Chile de Arbol, which literarily means “tree chili’ in Spanish, is a small Mexican pepper. People love it for the smoky nutty characteristics with an acidic heat which is 5-6 times hotter than the common jalapeno pepper.

This article digs into the basic must-know facts about chile de Arbol including its origin, heat, flavor, uses, and substitutes.

TABLE OF CONTENTS
What Are Chiles de Arbol?
Origin
What do they taste and look like?
Uses Of Chiles De Arbol in Cooking
What Is A Good Substitute For Chile De Arbol?

What Are Chiles de Arbol?

Chile de Arbol peppers are small and thin in size 2-3 inches long and less than ½ inch wide. The word “Arbol” in Spanish means “tree” which refers to the woody stems of the peppers.

It’s botanically classified as Capsicum annuum and is an heirloom pepper that belongs to the Solanaceae or nightshade family.  Also, they are known in other names as pico de Pajaro, rat’s tail chile, or bird’s beak chile—not to be confused with the Thai bird’s eye chile.

This hot pepper is popularly used in several Mexican dishes, as well as in Thai cooking. The vibrant red color of this pepper stays firm even after drying and cooking. They give a colorful spicy texture to the condiments or seasoning blends. The distinctive nutty and smoky tang makes this pepper the choicest ingredient in hot sauces and salsas.

The De Arbol Chile is said to have originated in the Oaxaca and Jalisco states of Mexico. Today, more than anything, it’s an icon of Mexican culture and foods.

Currently, this pepper offers a livelihood to hundreds of families in the western state of Jalisco where the commercial cultivation of this pepper spreads over 250 hectares of farmland.

Notably, dried de Arbol chile is an iconic symbol of Mexican culture and festive decorations.  They are often depicted in local artwork as ornamental kitchen decorations and hung in dried bunches known as ristras.

Fresh Chile de Arbol peppers are slender and small; averaging 1 to 2 centimeters in diameter and 5 to 8 centimeters in length with an elongated narrow shape. Dried peppers have a flat wrinkled appearance and retain the bright red color. The pepper has brittle, delicate, and dry flesh with a crumbling texture with numerous round and flat yellow seeds encased within the central cavity. Similar to other chiles in the Capsicum annum species, this pepper grows on a bush, where they ripen from green to red.

Generally, the pepper is utilized in dried form and drying enhances its earthy, smoky, and sweet flavor with subtle bitterness.  De Arbol chile has a complex flavor and fiery heat that ranges between 15,000 to 30,000 SHU on the Scoville Scale. However, the heat of the chile can sometimes reach up to 65,000 SHU depending on growing conditions and environmental factors.

Chile de Arbol peppers are exceptionally great for adding heat and spiciness, especially to salsa and hot sauces. In Mexican cooking, Chile de Arbol Salsa is one of the popular condiments that can be made with either fresh or dried chiles.

What Is A Good Substitute For Chile De Arbol?

If you can’t find de Arbo chiles, or you’ve run out of them, then just refer to Scoville scale units of various peppers to find the best chile de àrbol substitute for your recipe.

Japones Chile is a close match for Arbol chiles as they have similar appearance and heat levels. These two peppers have nearly the same nutty, smoky flavors.

In a pinch, you can use Cascabel pepper, guajillo peppers, cayenne powder, Gochugaru, or paprika in place of Chile de Arbol.