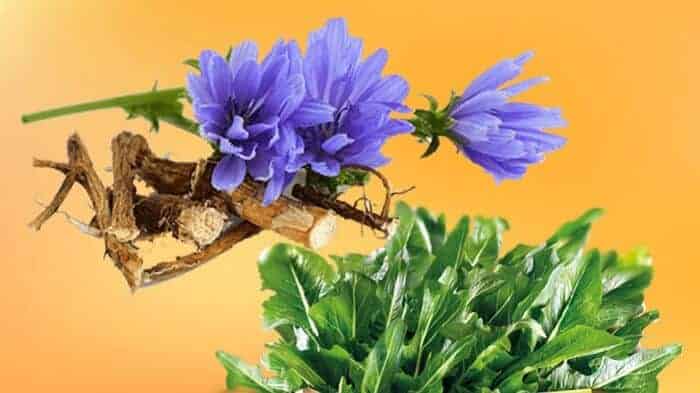 You may have heard of chicory coffee; used it in cooking as a spice or eating its raw or boiled leaves. But what is chicory?  If you aren’t familiar with it, then think of dandelion. They both belong to the same family of plants and have similar appearances and tastes. Chicory root, leaves, leaf buds, root extracts, seeds, and flowers have various uses in cooking, coffee making, and medicinal purposes.

This article elaborates on chicory meaning, uses, taste profile, health benefits, and chicory substitutes to use in a pinch.

TABLE OF CONTENTS
What Is Chicory?
Chicory Root Substitute
Substitute For Chicory Leaves

Chicory, or Cichorium intybus, is a woody, herbaceous plant in the dandelion family. Their bright blues flowers are truly admirable, but some varieties of them are adorned with pink or white flowers.

Native to Eurasia, chicory is grown in several regions across the world, often you’ll also find them growing wild along countryside roads and bushes. Many farmers use this forage crop for feeding livestock.

Today, chicory is commercially cultivated for its roots and leaves. The root powder is commonly used as a caffeine-free alternative to regular coffee.

You can buy chicory coffee from a beverage section of a supermarket or online vendors. If it isn’t available in your area, check out the chicory substitutes we have listed in this article.

RELATED: Herbs And Spices To Use In Different Foods

A study report published in the Journal of Functional Foods confirms that chicory root extracts, a type of prebiotic fiber, are rich in insulin. The root fiber may help in managing high blood sugar, promoting weight loss, and improving gut health.

Some of the key benefits include:

Note, regular chicory consumption can trigger a plethora of allergic reactions in some people. Also, chicory is not recommended for pregnant women, lactating mothers, and children.

Chicory root powder tastes similar to ground coffee beans. Many feel that it has an intense taste that includes nutty, warm, earthy, and woody flavors. Raw chicory leaves taste bitter thus sparingly used in cooking. However, blanching or cooking reduces the bitterness of the leaves.

On the whole, it has a flavor and texture that very well complements other salad greens.

In cooking, chicory leaves are eaten like celery, and leaf buds and roots are boiled and eaten. It is also used as a cooking spice to flavor beverages and foods. As a vegetable, chicory leaves nicely jell with other ingredients; especially, a nice addition to harm, salmon, and cheese.

Some of the ground-roasted coffee blends you buy from stores contain ground chicory roots. It helps to enhance the aroma, flavor and makes the coffee mellow with a reduction in caffeine. Also, chicory is cheaper than coffee but delivers all the flavor features of real coffee.

Chicory leaves get ready for plucking in fall and winter, other times you may have to use a substitute if you desire to have the same flavor.

Chicory roots and leaves have different culinary uses. The root is mostly used to flavor coffee and other beverages. First, let us look at the best alternatives to chicory roots.

Kola nut is the No.1 chicory root substitute, an equally useful and good coffee additive. This nut is sourced from the kola trees that widely grow in the African rainforest. Kola nut is endowed with a natural coffee flavor with a mild bitterness, a more enjoyable taste for those who dislike the strong flavors of roasted ground chicory roots. Like chicory, kola nuts also do not contain caffeine and can be used in the same way in your coffee.

Yerba mate is an herbal tea made from the leaves and twigs of the Ilex paraguariensis plant. It contains tannins, the same chemical compound that defines the taste of coffee, tea, chocolate, and chicory. If you don’t have chicory, use yerba mate instead. However, it contains caffeine, which’s a major distinguishable difference from chicory.

In place of chicory root powder, chocolate is another excellent additive for coffee. In fact, most people enjoy the complimentary flavors of coffee and chocolate blend than chicory. Also, chocolate is a viable substitute for ground chicory roots for its easy availability and cost-effectiveness.

We would recommend escarole as the best ingredient to replace chicory leaves.  Escarole is flat-leafed endive that belongs to the chicory family that can be used like chicory in several dishes. This green leafy vegetable can be eaten raw or cooked. It has all features of chicory except bitterness. For this reason, for those who are not fond of bitter taste, there is no better substitute for chicory than escarole.

Frisee, also known as curly endive, is salad green of the chicory family-like endive, escarole, and radicchio. The second best stand-in vegetable for chicory leaves is frisee as both of them have identical flavor features. They taste mildly bitter and have a good bit of peppery taste. Frisee goes well with most other ingredients in green salads, besides adding crispy texture and bite to the salads.

Like frisee, arugula also has a gentle bitterness with a mild peppery taste. Most people prefer the taste of arugula over chicory for its mild pleasant bitterness. Just like chicory, it is a perfect addition to green salads.

Lastly, kale is an effective substitute for chicory greens. Kale has a strong and earthy taste with a mild bitterness. The tough and crunchy leaves of kale have a strong taste equivalent to chicory leaves. In fact, most of us would love to have kale in our salad than chicory, a great substitute indeed.

Generally, chicory means the roasted and ground root of a plant in the species of Chicorium Intybus, subspecies Sativum. It’s a caffeine-free additive ingredient used for flavoring coffee. Chicory leaves are eaten raw or cooked and they are often used in green salads. To our findings, the best substitutes for chicory roots are kola nut, chocolate, and yerba mate. In palace chicory leaves, you may use alternatives like escarole, frisee, arugula, and kale.

Here are the best substitutions for basil.

What is a good substitute for arugula?

What is a good alternative to bouquet garni?

Use these substitutes for chervil.