With its delicious and fiery heat of cayenne pepper, you can have a go-to for a good punch to everything from sauces to hot juices.

This medium-hot pepper has been in use for both medicine and food for the past 9,000 years! Currently, it’s gaining a lot of popularity as a weight loss diet.

They, both green and red chilies, are extensively used in cooking. They are more commonly used in dried and ground form or dried or smoked flakes in preparing a variety of dishes.

When you don’t have cayenne, you can replace it with other types of hot pepper, especially those belonging to the Capsicum Annuum genes.

What can I use as a substitute for cayenne powder in cooking? It is a commonly raised question in cookery forums.

As we have mentioned, there are several varieties of peppers available, but only a couple of them have similar hotness and pungency to cayenne pepper.

The alternative chili types you choose instead of cayenne pepper should possess a similar amount of capsaicin concentration that is 30,000 to 50,000 Scoville heat units.

We have identified a few types of chilies that can replace hot cayenne. They can easily be integrated into your food delicacies such as whole, dried powder, or flakes.

Here are the top 8 substitute options you can use in place of dry or fresh cayenne pepper: 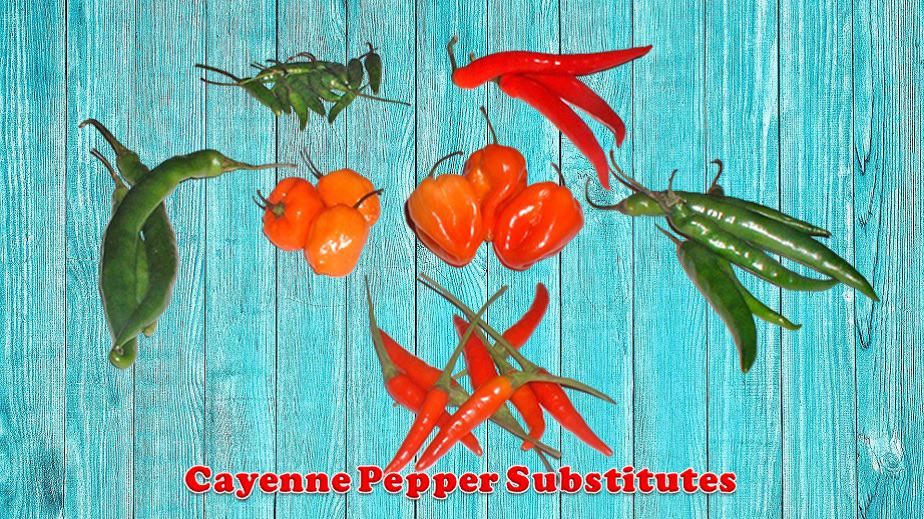 Paprika chili is produced in countries like Hungary, the Netherlands, China, Serbia, Spain, and some regions of the United States.

Hot paprika isn’t as spicy as cayenne pepper but they both have a similar taste. Use it as whole, flakes, or ground pepper.

One teaspoon (2 grams/one serving) of paprika supplies 6 calories and contains Vitamin A (21% DV).

Its heat levels vary according to its verity. Hungarian paprika is the most recommended variety for recipes because it has a unique flavor and higher pungency.

Since its level of heat is much lower than cayenne, you need to use a quantity by half a ratio more to achieve a pungency similar to ground cayenne pepper. Also, have a look at substitutes for paprika, some of them definitely good replacements for cayenne.

The serrano pepper (Capsicum Annuum) is a popular hot spice mostly cultivated in the mountain regions of the Mexican states of Puebla and Hidalgo.

The Scoville rating of Serrano is 10,000 to 25,000 which is very close to cayenne in pungency and heat. They are interchangeably usable in most recipes or else choose one of the alternatives for serrano peppers according to your heat and flavor preferences.

It is best when used as whole green chili instead of fresh cayenne.

The jalapeño is perhaps the most popular chili pepper in the United States.

In comparison to cayenne, it has a lower heat level and distinct flavor.

If you are using Jalapeño as a swap for cayenne pepper, you have to use a little more quantity than the latter to achieve a similar heat level.

It is an ideal choice for people who prefer mild hot chilies; if jalapenos aren’t available you may even use a jalapeno substitute.

Just like cayenne, it can also be used as whole, powder, or flake forms in hot recipes.

Any type of red chilies belonging to the species of Capsicum Annuum can be used for making red chili flakes.

You can substitute cayenne pepper powder with red chili flakes made from Chile De Arbol, Japones, and Tien Tsin.

Top-quality flakes/crushed peppers are got from Birdseye chilies, Capsicum frutescens, cultivated in India. Its hotness and pungency are similar to cayenne pepper.

You can also substitute raw, whole, or powder forms of cayenne with red pepper flakes made of cayenne.

Some of the popular brands of red pepper flakes have a mixture of three or more types of pepper chilies including cayenne pepper. If possible, make your own flakes with peppers of your choice, or use any of the substitutes for red chili flakes.

It is basically the Jalapeno peppers smoke-dried and ground.

After smoking the hotness of this hot spice is mellowed down and gives a smoky and spicy flavor.

In most of the ethnic food aisles in the grocery stores, you can find roasted chipotles in whole or ground into powder form.

The heat of the jalapenos varies according to the place where it is sourced. Thus the hotness and pungency of the chipotle powder are much lower than cayenne.

If you wish to make the recipe hotter and spicy, then you need to add more amount of chipotle powder and vice versa.

Smoky Jalapeno powder has a smoky flavor which is more appealing to most people.

Chipotle is a good alternative to cayenne pepper, especially for those who prefer mild pungency and richer flavor; even choosing one of the alternatives for chipotle would work in some recipes.

Some of the recipes require cayenne to be used in liquid form. In such cases, it is easy to replace the cayenne pepper sauce with a few drops of hot pepper sauce.

But they may not work well as replacements in a recipe that calls for cayenne in whole or powdered form.

Tabasco pepper is a good cayenne pepper substitute as both of them share a similar heat profile.

The juicy texture of Tabasco is more advantageous in using dishes that have gravy.

Tabasco has a totally different flavor from most types of red chilies and for this reason, adding it can change the flavor of the dishes to a significant extent.

It has the same red color as cayenne but a lower level of hotness.

If you are looking for something hotter than cayenne, Thai pepper is a fantastic choice.

It is a good swap for cayenne pepper if you love really spicy dishes; even a Thai chili substitute could go well in some recipes. 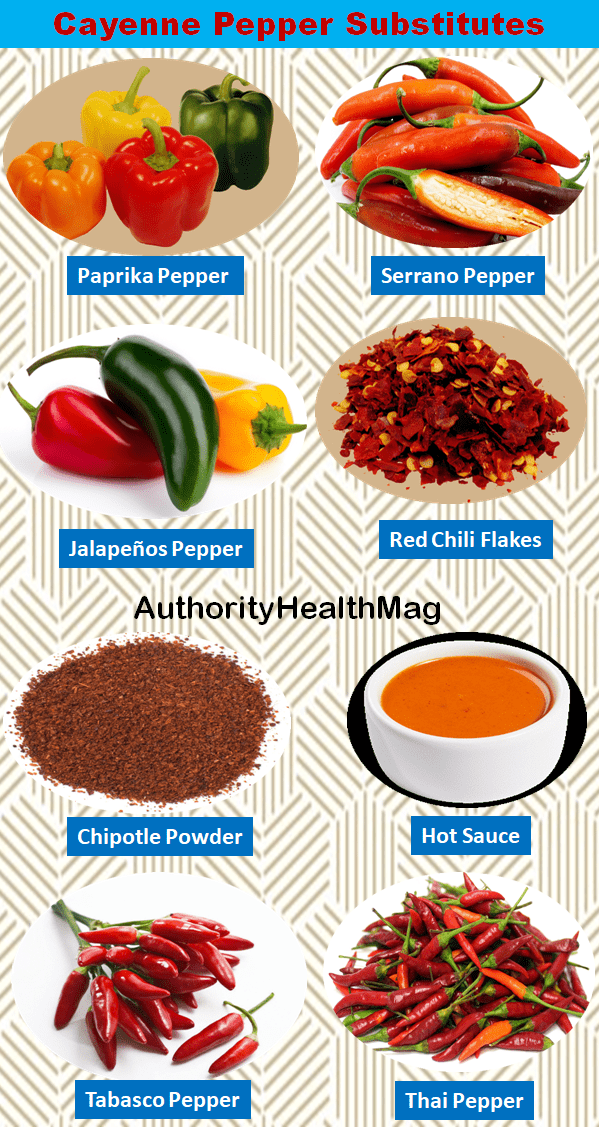 What is a less spicy substitute for cayenne pepper?

Paprika has a similar flavor profile but is noticeably milder. Regular paprika won’t top 100 to 500 Scoville heat units that are at least 80 times milder than cayenne chili. However, sometimes paprika can be cut with spicier ones like serrano. Another commonly available and milder pepper is Jalapenos; a good alternative to use.

Can I replace cayenne pepper for tabasco sauce?

Heat-wise, Tabasco is the closest match to the cayenne. However, besides peppers, Tabasco sauce has additional ingredients like salt and vinegar which gives it a complex flavor; also a paste-like consistency as opposed to chili powder. It can be a replacement for cayenne, especially in savory dishes.

Can I use cumin instead of cayenne pepper?

You can’t use cumin in place of cayenne pepper, but a better option is to use traditional chili powder that often contains cumin as an ingredient.

Other than cayenne, other spices like turmeric, ginger, cumin, mustard seed, cinnamon, fenugreek, black pepper, saffron, and rosemary are found to be effective for weight loss.

Read Next: Golden Cayenne Pepper: all facts including Scoville, flavor, uses, and benefits.