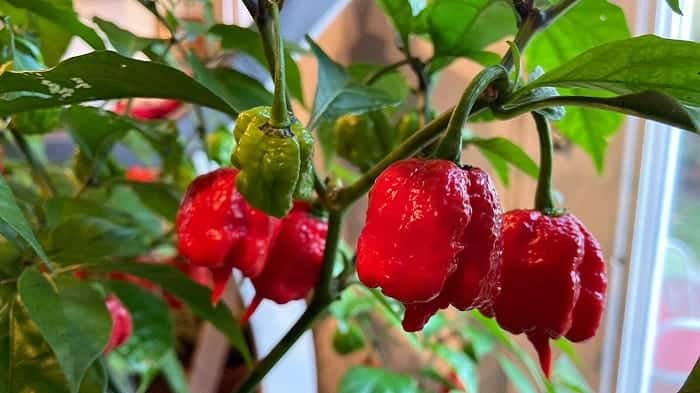 Ed Currie, the founder of Pucker Butt Pepper Company, who is on a mission to create the world’s hottest pepper, genetically cross-bred the Carolina Reaper, one of the most pungent peppers in existence. He is continuing his research to make it still hotter.

A decade ago, Ed’s Carolina Reaper was measured to be at the peak levels of over 2,200,000 SHU and even today holds the Guinness Record for the hottest chili pepper. However, the latest reports from various sources suggest that currently Pepper X and Dragon’s Breath Pepper respectively are the hottest peppers in the world.

What Is The Carolina Reaper Chili Pepper?

Carolina Reaper, also known as HP22B pepper, is an unbearably hot chili developed by Ed Currie, a chili grower and seller from South Carolina. Ed created it by crossing a Red Habanero from St Vincent’s Island in the West Indies with a Ghost pepper (Naga Morich). After several generations of this cultivar and through renewed cultivation methods, this pepper has achieved a heat level of about 2.2 Million Scoville Heat Units which was verified by Winthrop University in 2013. It is awarded as the hottest pepper in the world by the Guinness World Records.

How Hot Is The Carolina Reaper?

The unusually extreme heat of this pepper lingers in the mouth and palate for a long. Some may be even left with a feeling of severe face-melting heat making tears roll down their cheeks. It’s a lifetime experience of pepper heat like never before.

Carolina Reapers can be grown in containers or in the ground and the plant grows up to 3 feet tall. For container planting, it’s ideal to use a container with a capacity of 5 to 10 gallons. It takes about 90 days from germination to the harvest; each plant delivers several pounds of chilies over an entire season.

The fruit size varies between 1 to 2 inches wide and 2 t0 3 inches long, and this chili has a unique feature of “scorpion’s tail.” Most pepper pods have gnarly bumps all over while others have smoother skin. The ripened peppers have red color, but now other natural color variations like chocolate, yellow, and even peach exist.

What does the Carolina reaper taste like? On the one hand, it has a scorching heat that gives a severe blow to your palate but on the other hand, it’s wonderfully sweet and fruity. Most chefs prefer to use dry powder that is highly versatile enough to add heat and flavor to any dish whether sauce, stews, hot sauce, or others.  A hot sauce with Carolina pepper can be the hottest sauce that you have ever tasted though it mellows with age.

Use this pepper sparingly, as a little can be really too much.

Being extremely hot and spicy, a pinch of chili is enough to make any of your dishes instantly hot and flavorful. Use them for making hot sauces, or dehydrate them for making chili powders. Here are a few ways to make the best use of this chili:

The average heat level of Carolina Reaper is pecked at 1,641,000 Scoville Heat Units (SHU) against its own previous record of 71,000 SHU.  Any pepper that ranks above 1,000,000 SHU is a good substitute for Carolina Reaper and there are enough chilies that come above this range.

Here are the top 5 alternatives to consider:

Pepper X – a cultivar of Capsicum chili pepper bred by Ed Currie, creator of the Carolina Reaper. This pepper claims to be the hottest pepper in the world now with a Scoville scale of 3.18 million units, though not officially verified.

Trinidad Moruga Scorpion – comes from Moruga in Trinidad that pecks at 2 million Scoville Heat Units, making it a formidable pepper with heat that never stops building.

7 Pot Douglah – it’s the hottest pepper you can find that isn’t red, also known for its great flavor. This chili has a heat level reaching over 1.8 million SHU.

7 Pot Primo – is another good substitute for Carolina Reaper as both of them look similar and insanely hot as well.  7 Pot Primo’s heat level reaches above 1.4 million SHU.

What pepper is hotter than a Carolina Reaper?

There have been recent reports that Pepper X at 3.18 million SHU and Dragon’s Breath Pepper testing in at 2.48 SHU are far hotter than Carolina Reaper that is still ranked #1 by Guinness.

Can you die from eating a Carolina Reaper?

N0. Consuming a minimal amount of capsaicin triggers pain and pungent heat only in your mouth and throat but your body is not hurt. However, consuming intolerable doses of capsaicin that is to say about 3 pounds on dried Carolina Reaper powder at a time can be fatal.

Is the Reaper a GMO?

No, it is not a genetically modified organism but a crossbreed between Ghost Pepper and Red Habanero.

Is it safe to eat a Reaper?

Yes, usually there is no harm in eating extreme hot pepper though it may cause acid reflux or upset stomach for some who are not used to spicy foods. Others with serious health concerns may face issues like headaches or other physical discomforts.

Is the Carolina Reaper natural?

This isn’t a naturally evolved pepper like most other peppers but a lab-assisted crossbreed of two other hot peppers.

What is the maximum age of a Carolina Plant?

This chili plant has an average life span of 10 years provided they are well protected from freezing temperature or high heat. Container planting helps to transfer them indoors or outdoors according to seasons.