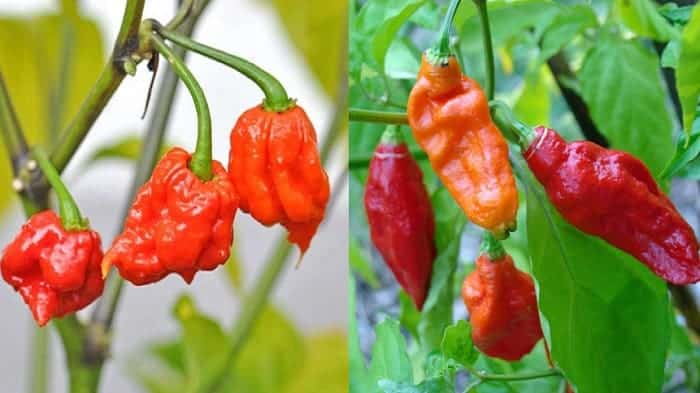 A comparison between Carolina Reaper and Ghost Pepper is interesting as they have been a topic of hot discussion for all chili lovers. Which of them is the hottest? What are their similarities and differences?  This article looks into all-important details on Ghost Pepper Vs Carolina Reaper facts.

What Is Carolina Reaper?

Carolina Reaper is one of the hottest chili peppers in the world. It’s a crossbreed of ghost pepper and habanero developed by Ed Currie. The chili is bred in Rock Hill, South Carolina, greenhouse by “Smokin” Ed Currie, proprietor of the Pucker Butt Pepper Company in Fort Mill.

This cultivar belongs to the chili pepper species of Capsicum Chinense. In 2013, this pepper was officially recognized as the hottest pepper in the world by Guinness World Records and still, the record remains the same.

This pepper is not only hot but also has a sweet and fruity flavor; a challenge to the taste buds but at the same time enhances the flavors of a dish.  In fact, it has a lot more flavor and hot punch than any other mega-hot pepper.

What Is Ghost Pepper?

The ghost pepper, also known as bhut jolokia, is a hybrid chili pepper grown in Northeast India. It’s a hybrid of Capsicum Chinense and Capsicum frutescens (wild chili). It was awarded the World’s Hottest Pepper by the Guinness World Records in 2007 and held the record till 2010.  It was eventually toppled several times over and finally by the reaper. Currently, the official record holder for the hottest pepper is the Carolina Reaper but two new entrants, Dragon’s Breath Pepper and Pepper X, are set to beat its record.

Definitely, their popularity and extreme heat levels have given them many fans all across the world. Ghost pepper enjoys wider popularity for it has been in the game for a long and its name itself creates a lot of curiosity.

They are two distinctive types of chilies despite the few similarities they share.

Heat: Carolina Reaper is superior in the heat with an average heat level of 1,569,300 SHU against Ghost pepper’s 948,214 on average SHU. In short, they are unbearably hot for most people unless the pepper extract has been diluted with other ingredients.

Appearance: A ripe ghost pepper measure 2.5 to 3.3 inches long and are usually read, though there are orange, yellow, purple, white, or chocolate color varieties. Carolina Reaper is smaller in size with about 1.5 to 2 inches in total length and has a scorpion-like tail and is usually red when ripe.

Flavor: Both the peppers offer a fruity, sweet chili flavor with wicked heat. Overall, Carolina reaper is the sweetest among all the mega-hot peppers of the bunch. Both are slow-burn chilies that take a couple of minutes for the heat to begin to hit hard on your taste buds.

Uses: They are excellent for making hot sauces and salsas for they are wickedly hot and deliciously fruity and sweet. Dried and powdered peppers or pepper flakes are often used in seasoning blends, chutneys, pickling spices, rubs, and hot recipes. Both are used for making military-grade pepper spray.

Both these chilies are insanely hot but Carolina Pepper has much higher levels of heat and deeper flavor. Use them with extreme caution they are not meant for the timid. Some extreme chili eaters seriously love them and they go to the pinnacle of challenges in gorging on either of these chilies. So much so, the ghost pepper challenge is a craze with many today; that is absolutely not recommended for anyone. Even the heat levels of moderately hot peppers like habanero and the Scotch Bonnet are unbearable for most people; be cautious in eating Ghost Pepper and Carolina Reaper.