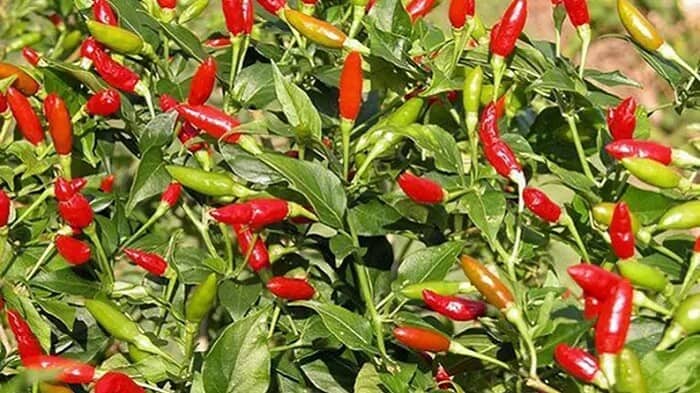 Bird’s eye chili is commonly used to make hot dishes in Southeast Asia. This chili grows well in hot and humid weather conditions. It tastes best when used raw but dried or cooked chilies also work well in spicy dishes. In size, Bird’s eye chilies are small but they pack real heat and are often used to make fiery sauces and chutneys.

What Are Bird’s Eye Chilies?

Bird’s eye chili is a variety of small chilies that belong to Capsicum annuum species, commonly cultivated in Southeast Asia, grows wild in Ethiopia and her neighboring courtiers in Africa. This chili is also known in different names like Thai chili, bird eye chili, or bird chili; cili padi in Malay, or kanthari in Malayalam. Several Thai and Indian dishes often include this chili. In Asian spice shops, this small and narrow pepper is sold as Thai Dragon.

Bird’s eye chiles grow about 2 to 4 cm long with thin body texture and pointy tail-end. Tender chilies are green but they turn into deep red colors when ripe; some varieties have orange or purple colors as they mature. In Thai cooking, green chilies are used in green curries, while mature red chilies are used in red curries.

Key facts of Thai Chili in a gist:

On the Scoville scale, the maximum heat of Bird’s Eye Chili is pecked at 100,000 SHU Scoville Heat Units. Tabasco Chili, a similar-looking chili, has 50,000 SHU that is just half of it. The Bird chili’s heat ranges between 50,000 t0 100,000 SHU. In comparison, it’s 10 to 20 times hotter than Jalapeno pepper and half the heat of habanero

Bird’s eye chilies are narrow and small with a pointed tail and their color changes from green to red when mature. The unripe green chilies are popularly used in cooking.

People like Bird’s eye chilies for their fruity and peppery flavor with high heat. Don’t take their size for granted for they pack a real kick that brings tears to your eyes. Honestly, chili with heat levels above 100,000 Scoville units is not for the faint-hearted. The spiciness of the mature red bird’s eye chilies has delayed potency with the heat gradually building up and then lingering on your palate for long.

Thai chili is an unavoidable part of several Thai, Vietnamese, Indian, and Indonesian cuisines. Green chilies are favored over the ripe red chilies in most dishes. They are added to stir-fries, sauces, curries, salads, soups, chutneys, and marinades. Usually, the stem is removed and chilies can be used whole, diced, or pureed. Y0u may use them in any dishes that require to be hot and spicy. The fruity taste of this chili is a nice addition to most vegetable dishes.

As a precaution, wear gloves and kitchen goggles while handling hot chilies. Capsaicin, the heat-producing chemical in chilies, can cause chili burns, especially in extra sensitive body parts like the eyes and nose.

Where to Buy Bird’s Eye Chiles?

Bird’s eye chilies are available in most supermarkets year-round, both fresh and dried chilies. Note, in some places they are labeled as “Thai chilies.” If can’t locate them in your area, you may think of getting them from online grocery shops. Always look for fresh chilies without wrinkles and blemishes.  You can also, get the seeds of this chili and grow them in your kitchen garden or as a potted plant indoors.

Store the fresh peppers in the crisper of your refrigerator and will keep them for up to two weeks. Don’t wash the chili before refrigeration for moisture on them encourages faster decaying.  For long-term use, preserve the bird’s eye chili in dried or pickled form.

The easiest Bird’s eye chili substitute is cayenne peppers which have heat levels ranging between 30,000 – 50,000 SHU. They aren’t as hot as Thai chili but easily available in most places.

Another great substitute for Thai dragons is chiltepin pepper which is a tiny, round, or oval-shaped chili pepper with its heat measuring up to 100,000 Scoville Heat Units.