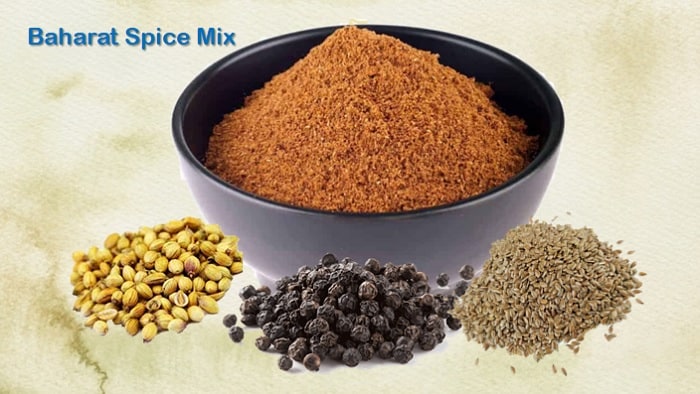 There are several types of spice blends specific to the traditional recipes of a particular region and its food culture.

Baharat spice mix is most popular in the Middle East. Therefore, it is not easily available in the rest of the world.

Middle Eastern food is phenomenal. In fact, it is the spice blends like baharat that make Arab foods so delicious and endearing.

When you are going to prepare a recipe that requires baharat spice mix and you have it, nothing to worry about. You can easily make this spice mix by yourself or use a baharat substitute.

TABLE OF CONTENTS
What is Baharat?
Best Baharat Substitutes
What Is Baharat Used For?
The Bottom Line

Adding a little of this spice blend can bring in wonderful depth and flavor to meat, stews, sauces, soups, vegetables, and others. This spice mixture can also be used as a condiment.

There exist several variants of this spice mix from one region to another with a difference in one or more ingredients included or excluded in it. For example, the Turkish baharat includes mint in the largest proportion while in Arabian baharat doesn’t have it at all.

A typical recipe for baharat is a mixture of the following finely ground ingredients:

Unless you have a Middle Eastern gourmet store in your area or get it online, it’s challenging to find baharat, especially outside the Arab region.

No problem even if you don’t have the pre-mixed baharat. Here are the best substitutes for baharat spice mix.

As there are many variations in baharat depending on the region, the Middle Eastern baharat blend is our consideration here. It typically includes cardamom and paprika along with cumin and nutmeg. The other key ingredients in it are allspice, coriander, and saffron.

If you notice, most of these ingredients you may already have in your kitchen cabinet or can easily be found at a local grocery store near you.

While making this spice blend, you may add or eliminate anyone or two ingredients according to the specific requirement of your recipe and your taste preferences.

Roast the ingredients, except cinnamon, nutmeg, paprika, as whole spices/seeds over medium-high heat for about 4 minutes. While roasting, keep it tossing regularly to prevent scorching. Transfer the roasted ingredients to a bowl and let them completely cool down. Then grind all the ingredients together, including unroasted paprika, nutmeg, and cinnamon, in a coffee or spice grinder till they turn into powder. Store the ground spice mixture in an airtight glass jar.

The name ‘Ras el hanout’ literally means the head (or king) of the shop. It is a North African spice mixture that usually consists of over a dozen spices, in different proportions. The ingredients used in this spice mixture include cinnamon, nutmeg, cardamom, mace, allspice, cumin, clove, dry ginger, chili peppers, sweet and hot paprika, coriander seeds, peppercorn, dry turmeric, and fenugreek.

This spice mixture contains all the ingredients used in baharat and a few more. They both share a similar flavor because of the common ingredients.

The difference between these two spice blend is hardly noticeable unless a significant variation is made in the measure of ingredients used for making them.

You can substitute Ras el hanout for baharat in a 1:1 ratio.

Just like the Ras el hanout, the garam masala (popularly used in Indian cooking) contains more or less the same ingredients used baharat. The flavor profile baharat is similar to that of garam masala.

The dominant ingredients in garam masala are cloves, cardamom, and coriander.

Garam masala is typically used for adding it to the cooked foods as you do with the baharat. Both these spice blends are equally hot.

Use the garam masala in your recipes in the same measure as you use baharat.

What Is Baharat Used For?

Undoubtedly, baharat is quite a versatile spice mix.

This spice blend is popularly used as a dry rub on almost all types of meat cuts.

Most home chefs use it as an elemental seasoning in stews and soups, giving them a delicious mild sweet and hot punch.

Besides meat recipes, you can use it as a complement for vegetables and seafood. It works very well as a flavoring in salads and vegetable stews.

In the Middle East, baharat is used in the local staple delicacies of pilaf dishes which are rice-based. Also, this spice blend is used in dishes that contain lentils and similar legumes.

With its growing popularity across the world, you’ll find some burger joints in the West using baharat as a seasoning in hamburgers and lamb chops.

Baharat is a savory spice blend that is used in both Middle Eastern and Greek cuisines. The word baharat is simply the Arabic word for spice. In the Middle East, it is often used as a condiment that is added to cooked food.

In place of pre-mixed baharat you can make this spice blend at home. Other close substitutes for baharat are Ras el hanout and garam masala.

Can I use pumpkin pie spice instead of apple pie spice?

How do I substitute pumpkin pie spice for individual spices?

What can I substitute for garam masala?

What is a good substitute for Cajun seasoning?