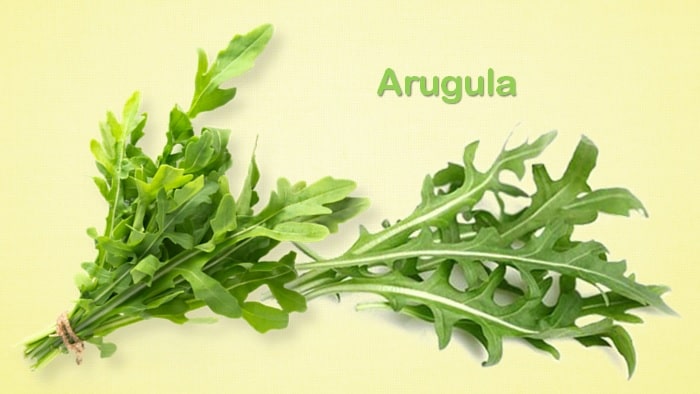 Arugula, a salad green vegetable, tastes great in a variety of dishes like salads, soups, pizza, or sandwiches. The many health benefits of this green vegetable include reducing cancer risk, heart disease, and diabetes that make this leafy vegetable all the more endearing.

This article brings home to you the best arugula substitute you can use in a pinch; also a brief overview of arugula including its taste profile and uses.

TABLE OF CONTENTS
What is Arugula?
What Does Arugula Taste Like?
Uses In Cooking
Best Arugula Substitutes

Arugula is a cruciferous vegetable, an aromatic salad green popularly used in Italian cuisines. Arugula’s popularity heavily hinges on its health benefits than its taste.

Is arugula the same as a rocket? Yes. It is also known as rocket, roquette, arugula, salad rocket, rucola, or Italian cress.

Like other vegetables from the cruciferous family like broccoli, kale, or Brussels sprouts, this leafy green also contains high levels of beneficial nutrients useful for health. In fact, arugula is an excellent and healthful addition to most diets.

Mostly the baby arugula is popularly used in cooking, especially as part of salad mix. The serrated variety, sometimes referred to as Italian wild arugula, is sparingly used in culinary dishes.

Green arugula with larger leaves taste peppery but the overblown arugula leaves can taste bitter. Fresh leaves of the common arugula have a distinctive spicy kick; their flavors can be bright, peppery, tart, or slightly bitter depending on their maturity. The Italian wild arugula has a more pronounced spicy and bitter flavor.

For some people, arugula tastes bad like dirt. Usually, the stale arugula can taste bad but the fresh leaves have a pleasant peppery taste with a mild note of bitterness.

Arugula greens are primarily used as an accent in a fresh salad. It is a flavorful addition to pasta, rice, and potato dishes. You can also toss the leaves into salads, chopped and sprinkled over roasted meats, or use it as toppings over pizza or taco. The green leaves are often used as an edible garnish, or minced and mixed into dips, pesto, salsa, spreads, and dressings. Still, there are tons of more ways to use fresh green arugula in your cooking.

Arugula is a great addition to salads and cooked dishes. Some relish its taste but there are others who don’t enjoy it. Also, this green vegetable is not available throughout the world. You may want to have an arugula substitute for any reason. If you are thinking of a replacement, then consider one of the following vegetables.

Watercress belongs to the Brassicaceae family of plants like arugula. Its small, round leaves and edible stems have a peppery, slightly spicy flavor very much akin to arugula.

First of all, the identical flavor is what makes Watercress a useful replacement for arugula. Secondly, these two cruciferous vegetables have a similar appearance and their leaves are used in the same way in culinary cooking. Both of them have a somewhat similar nutritional profile as well.

Use arugula and watercress interchangeably in any dish that calls for either of them. Note, watercress is a bit delicate than arugula, and it gets mushy quickly when subjected to high heat cooking.

The mustard-like bite of purslane makes it a possible substitute for arugula. However, the succulent leaves of this plant have quite a different texture in comparison to arugula. Still, purslane works well in most recipes that call for arugula.

Similarly, purslane has a rich nutritional profile like the arugula that makes it even more of a worthy alternative.

Spinach has superior nutritional benefits in comparison to arugula. This dark, leafy green vegetable is also ubiquitously found everywhere and this makes spinach an easy replacement option for arugula.

Plus, spinach is a versatile leafy vegetable that is a good complement to most dishes. A mild, slightly sweet taste of spinach is more acceptable to most people than the peppery, bitter flavor of arugula.

Of course, people who love the harsh taste of arugula may not appreciate the mellowed flavor of spinach. The broader and oval-shaped leaves of spinach may alter the texture of recipes that call for arugula.

Frisee, also known as curly endive, belongs to the chicory family of plants. This dark green leafy vegetable is a nice addition to salad blends. Plus, the slightly bitter flavor of frisee has a comparable likeness to arugula.

The delicate texture of frisee leaves may not do well in cooked dishes but works well for garnish and in salads.

Escarole is a leafy green vegetable and a member of the chicory family along with Belgian endive and frisée. In its raw state, it is mildly bitter like arugula. This leafy vegetable has good nutritional values like arugula, especially, rich in folate and vitamins K and A. Use Escarole to replace arugula in salads, soups, and stews but not in fried dishes.

Radicchio is the purple cousin of Escarole with the very same flavors and uses in cooking. Its white-veined and red wine-colored leaves are very different from green arugula. It is the spicy, slightly bitter flavor of radicchio that makes this chicory vegetable a suitable arugula substitute. Like arugula, raw radicchio is a delightful addition to salads and a tasty topping for a taco. You can also use roasted or grilled radicchio to flavor sandwiches, pasta, or pizza.

What is a good substitute for fenugreek leaves?

What can I use in place of epazote?

Looking for a curry leaf substitute?

What to do when I don’t have lovage?