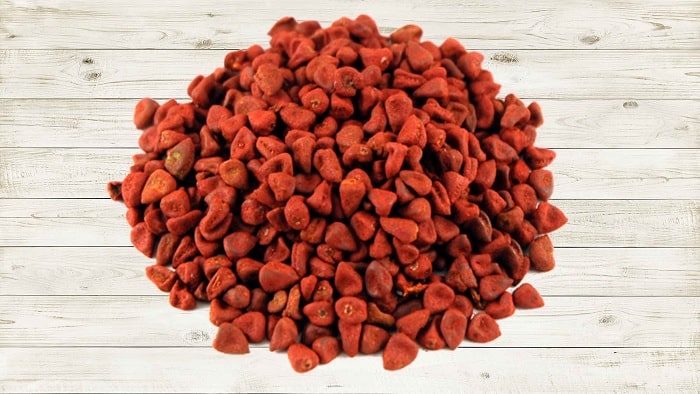 Annatto is a lesser-known spice available as seeds, powder, paste, or oil forms. This isn’t a spice that you’ll find everywhere. If you are on with a dish that requires annatto and you don’t have it, then think of using any of the annatto substitutes we have listed in this article.

What is Annatto seed?

Annatto is an orange-red condiment and food coloring obtained from the seeds of the achiote tree, native to the tropical regions of Brazil and Mexico. Remember that annatto is also labeled as ‘achiote’ or ‘achiote seeds’.

Achiote spice is mostly used to add orange or yellow color to foods but is sometimes used for its aroma and flavor as well.

Annatto is occasionally used as a spice in a few Spanish and Portuguese dishes. Also, it’s commonly used in English cheeses like Gloucester and some cheddars; including French Mimolette. Because of its color and mild flavor, annatto is a popular seasoning and color additive in several cuisines across the world.

The flavor of annatto is slightly nutty, sweet, and peppery. Its aroma is mildly peppery with a hint of nutmeg.

Interestingly, many home cooks use annatto powder as a cheaper substitute for expensive saffron.

Annatto seeds and powder is not always available in most grocery stores as it’s rarely used ingredient in cooking. Even if you don’t have this coloring spice, still you can manage the recipe with an annatto substitute.

Here are the best alternatives to use in place of annatto seeds, paste, or powder:

Like annatto, safflower is mainly used as a seasoning and coloring agent in food. Similarly, the mild flavor of safflower makes it a compatible ingredient in most recipes.

Perhaps, safflower is the best substitute for annatto when used for the purpose of coloring foods. The bright yellow color of safflower is identical replication of annatto.

Also, the annatto and safflower powder can be used in the same way in most recipes. When you use either of these powders, less than ½ teaspoon of the powder is enough to color a dish of 5 servings.

Saffron is a spice derived from the flower of Crocus sativus, used mainly as a seasoning and coloring food. Over fifteen thousand saffron flowers are required to make 1k grams of saffron, thus it’s a very pricey spice not affordable for most home-cooks.

Saffron renders a deep orange color to your dishes as annatto does.

Saffron has a subtly earthy and grassy flavor and aroma, yet mildly sweet. For the sake of food coloring, saffron is an excellent alternative to annatto. However, the stronger flavor of saffron can prove to be overpowering in some dishes and beverages that originally use annatto.

As a substitution ingredient for annatto, use saffron in a small amount; less than ½ a teaspoon.

Undoubtedly, turmeric is the most popularly used food-coloring spice, especially in Asian cooking. A pinch of turmeric powder is enough to add a deep golden hue to your dish. It’s a wonderful ingredient in stews or curries that bring warm flavors with pleasant earthiness in the background.

Turmeric powder is a key ingredient in a wide variety of curry powders used in Indian cookery. Also possible to use grated or pureed raw turmeric roots in your dishes to give the brilliant yellow color and warm flavor.

Of course, the strong flavor of turmeric is a class apart from annatto, but they both produce exactly the same effect in coloring foods. While using turmeric as a replacement for annatto, use it in small quantities.

A blend of paprika and turmeric is a manageable alternative to annatto seeds. Paprika subdues the strong, warm flavors of turmeric to a great extent, and gives a peppery note to your dish. This combination provides for a balance of flavor and color; gives your dishes a similar feel and look like annatto does. Some say a mixture of turmeric and paprika does a better job than annatto seeds in some of your dishes, especially rice dishes.  Use these ingredients in equal proportion while making the blend.

Annatto or achiote seeds, mostly used in powder or paste form, add a mild peppery flavor and bright yellow/orange color to your dish. It’s more of a food coloring agent than a flavoring ingredient. Even if you don’t have annatto, still you can manage your dish with a good substitute like: