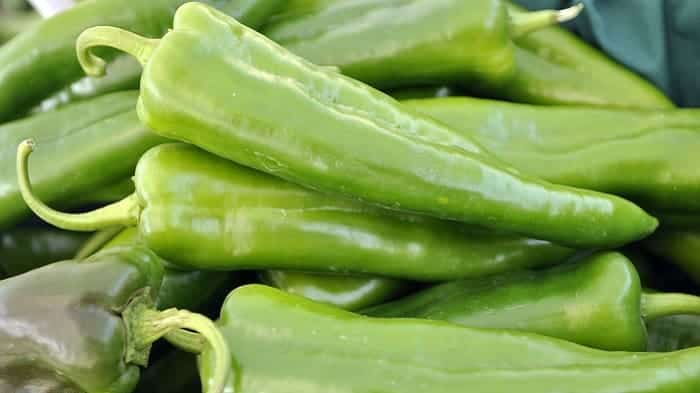 What is Anaheim pepper?

An Anaheim pepper is a mild medium-sized New Mexico chili pepper that grows to 6-10 inches long. Usually, this chili is used in cooking when green but it can also be used when red or dry.

The name “Anaheim” derives from Emilio Ortega, a farmer who brought the seeds to the Anaheim, California, area in the last decade of the 19th century. This green chili is also known as California chile. Since this chili was first commercially cultivated in New Mexico, it is also called New Mexico peppers.

This green chili has its humble origin in New Mexico where the natives simply referred to it as “chile”. In fact, it was a very commonly cultivated medium heat variety of traditional chili pepper in New Mexico but it was not known outside the region. However, in 1894 Emilio Ortega brought the seeds of this chile to the city of Anaheim in southern California and began to grow them commercially. Ortega soon produced a canned version of fire-roasted Anaheim chile and it was one of the first canned products to have been developed in California in the early 19th century. Due to differences in climatic conditions and soil, Anaheim chili peppers have a milder flavor and tender consistency than their New Mexican counterparts.

Anaheim Pepper Facts In A Gist

How spicy are Anaheim peppers?

The spiciness of a pepper is judged by the capsaicin content which is measured by Scoville Scale. The commonly found Jalapeno pepper will rate about 5,000 Scoville Heat Units (SHU) and cayenne pepper will measure about 50,000 SHU.

Is Anaheim pepper spicy? No. It’s a low heat pepper that falls between 500 on the low end to as high as 2,500 on the high end of Scoville units. On the other hand, its New Mexican counterpart ranges from 500 to 10,000 Scoville units.

California chile has less than half the spiciness of Jalapenos. If the seeds are removed before cooking then their heat level will come down still further.

What does it taste like? Anaheim peppers have a bright slightly peppery and fruity taste with low-level heat. When cooked it develops a slightly smoky, sweet, and tangy flavor.

Anaheim pepper is used both in raw and cooked dishes, especially in a wide range of savory dishes. Many prefer to roast the pepper until the skin is charred and then the soft fleshy chili that appears after removing the charred skin tastes amazingly great. In a wide variety of ways this chili is utilized in cooking; chopped Anaheim pepper is a great addition to sauces, stews, and salsas, served with egg dishes, layered over tacos, and nachos, or tossed into pasta. Like the bell peppers, it’s often stuffed with cheese and meat, dipped in egg, and then fried to make Chile Relleno. California chile pares well with pork, poultry, eggs, tomatoes, black beans, cheese, corn, rice, avocado, zucchini, and spices like cumin and coriander. Other than cooking purposes, the pepper can be used for flavoring cocktails such as Margaritas and Palomas.

Storage: Green Anaheim pepper stays fresh for up to one week when stored whole, unwashed, and loosely placed in a plastic bag in the refrigerator. Canned or dried peppers have a shelf life of up to one year if stored in an airtight container and kept in a dark, cool, and dry place. After opening the canned pepper, do not leave the can open for more than a few minutes; immediately store the leftovers in the opened can in the refrigerator.

As the name suggests, Anaheim pepper is easily available in California and New Mexico regions, but scarcely found in other places. However, there are a few other chili peppers that you can easily use in place of Anaheim chile. Some of the best substitutes for Anaheim pepper are bell pepper, poblano, jalapeno, serrano, and Hungarian wax peppers. Here are the top five substitutes to consider:

Poblano pepper appears like bell pepper but flavor-wise it’s more like Anaheim pepper. They have low levels of heat through New Mexican chiles can be slightly more potential. Both Poblano and Anaheim can be used as stuffed chiles. In fact, for stuffing purposes, Poblano is superior to California chile for its larger cavity and crispy texture.

For those who are not fans of spicy chilies, bell pepper is the right substitution for Anaheim pepper. Bell peppers have a sweet, mild flavor with grassier notes; something that you can munch on like a fleshy vegetable. To your advantage, bell pepper is easily available everywhere – no need to hunt around for it. Bell pepper is an excellent stuffing pepper, in fact, better than Anaheim.

Another worthy replacement for California chile is the Hungarian wax pepper despite its higher heat levels. However, it isn’t the right choice for those who cannot bear spicy heat for Hungarian wax pepper which is at least twice hotter than Anaheim pepper. The taste profile of this pepper is akin to Jalapeno chili and some varieties of them are as hot as serrano pepper. The mild tanginess of wax peppers is a distinguishable difference from Anaheim peppers. This substitute option works best as chili for stuffing than adding this pepper to your dishes.

Jalapeno, the most cultivated chile worldwide, makes a decent replacement for Anaheim pepper due to its similar taste and easy availability. Jalapeno chilies are slightly hotter than California chile when they are green but turn sweet once ripened. They aren’t great for stuffing because of their smaller size, otherwise, they can be used in most recipes that call for Anaheim chile.

When you haven’t got poblano or bell peppers, the next best substitute for Anaheim chili pepper is serrano pepper. In terms of heat, serrano is a few times hotter than Anaheim but they have a sweet smoky flavor in common especially when cooked. Serrano works great in salsa, soups, stews, and savory dishes that call for Anaheim pepper.

Nutritionally, Anaheim chili pepper is a good source of vitamins A and C that help to boost your immune system and make your organs healthy. This pepper also contains vitamins B6 and K. Ample amount of fiber in it is great for digestive health. Eating two or three Anaheim chiles can supply your body with the daily requirements of potassium that is necessary for fluid balance, nerve and muscle health, and helps to prevent potential health hazards like stroke and nerve damage. Anaheim pepper is very low on calories and contains Capsaicinoids that are beneficial for weight loss. In general, peppers may also help lower your LDL cholesterol levels.

Anaheim is a medium-sized chili pepper that grows from 6 to 10 inches long, comparatively narrow with a curved body like Jalapenos. They have broad shoulders and pointed bottoms. This pepper age one the vine from green to deep red.

Is an Anaheim pepper the same as a poblano pepper?

No, they aren’t the same though they have many features in common. Anaheim is mildly spicy and is more delicate than poblanos; also lighter in color and slender in shape. Both these peppers have similar uses and are often roasted and peeled before use.

What is another name for Anaheim pepper?

What is the difference between an Anaheim pepper and a jalapeno?

Jalapenos, which grow on average three inches long, are comparatively smaller than Anaheim which grows on average eight inches long. Anaheim has a broad shoulder and pointer bottom than a more round-shouldered Jalapeno, but both have a distinct curve. Anaheim is a mild chile (500 to 2,500 SHU), which is up to 16 times milder than Jalapenos.

Which is hotter poblano or Anaheim?

The average heat of poblanos comes around 1,250 SHU while Anaheim ranks at 1,500 SHU. So, you are likely to get an equally hot or slightly hotter Anaheim.

A typical taste of sweet bell pepper is present in Anaheim, but with a mild heat that comes forth after the initial sweetness. Just like the bell pepper, this pepper also is often stuffed with vegetables, spices, and cheese to make chiles Rellenos.

When to pick Anaheim peppers?

A fully grown Anaheim pepper will be about 7 to 8 inches long, and they are best when picked before ripening. This pepper is mostly used in cooking when green, though it can be used when red. They have sturdy stems, thus use a knife or shears to clip them; forcefully pulling them off can damage the plant.

Do you have to peel Anaheim peppers?

Anaheim peppers have tougher skin than bell peppers. Usually, after roasting this pepper, there comes up tiny blisters that allow you to easily remove their skin. However, the tender peppers with thin skin don’t need to be peeled but actually, render a delicious smoky flavor.

Do Anaheim peppers get hotter when they turn red?

Like most varieties of chilies, if they are allowed to get ripened on the plant, the fruits will be spicier and sweeter than green peppers. When this pepper is fully ripe, it will turn deep red in hue.

READ NEXT: Substitute For Chipotle Powder