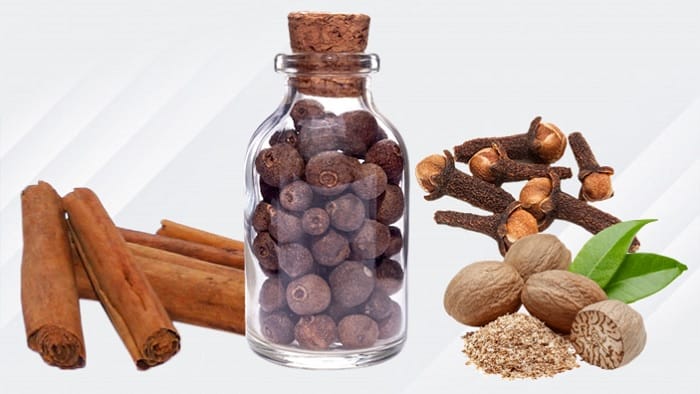 It isn’t easy to find an exact-match allspice substitute. However, you can still have a substitute by using some of the similar spices you probably already have on your shelf.

Allspice is the dried brown berry of the tropical Pimenta dioica tree mostly found in the West Indies and Central America.  This berry is also known in other names like Jamaica pepper, myrtle pepper, pimenta, or pimento.

The name ‘allspice’ is said to be given by 17th-century European merchants because it tastes like a combination of nutmeg, clove, and cinnamon.

Jamaica pepper is harvested when unripe (green) and briefly fermented, then sun-dried. The berry turns reddish-brown when fully dried.

Allspice is popularly used in Middle Eastern, Caribbean, and Latin American cuisines, among others.

What is the flavor of allspice? Allspice contains all the warm, sweet, savory flavors of three spices – cloves, cinnamon, and nutmeg.

Eugenol is the chief aromatic compound contained in it, also found in cloves. Other flavoring compounds in it are caryophyllene (woody) and cineole (fresh and sharp).

The sweet and warm pungent note of this berry has a peppery overtone with hints of peppercorn and juniper.

Allspice is somewhat hot as well, rating a 4 on the hotness scale.

The whole allspice is a brown berry, almost looks like a large peppercorn. Usually, this berry in ground form is used in cooking.  In pickling brine, you may use the whole allspice berries or in a sachet to infuse spiced wine or cider.

Note, pre-ground allspice kept on shelves for more than a few weeks may typically lose its flavor. Therefore, it’s best to grind the berries in small quantities for immediate use. For storing, keep the dried berries in the whole form in an air-tight container.

What is a good substitute for allspice?

If you have exhausted allspice availability then use an allspice substitute that replicates its flavor profile and aroma.

By happy chance, you may already have in the spice rack other ingredients that you can use to replace allspice.

Here are a few suggestions we have for you as a replacement for allspice berry.

Blend Of Cloves, Nutmeg, and Cinnamon

Honestly, you’ll not find a single ingredient that matches the complex flavor profile of allspice.

In a pinch, you can approximate its flavor by blending three spices: cinnamon, cloves, and nutmeg.

Ground the three ingredients and blend them well in a small jar or using a mixer-grinder.

Most recipes require only a small amount of allspice. You can substitute the mixture for allspice in a 1:1 ratio.

According to the flavor profile of your recipe, you may omit nutmeg and use 2 parts of cinnamon and one part of cloves.

In place of allspice, you may use ground cloves alone or in combination with nutmeg, black peppercorns, mace, or cinnamon.

Among all these spices, clove has the strongest flavor and closest similarity to allspice. The emphatic warm flavor of clove can overpower other ingredients with a delicate flavor. If you are using ground cloves as a substitute for allspice, use it in less quantity; preferably, just half the portion.

Some recipes like pickle brine may call for whole allspice.  In the absence of whole allspice, you can use about ½ teaspoon of ground allspice in place of six allspice berries.

Beware; using ground spices can alter the flavor and color of the dish to some extent.

Instead of whole allspice, you can use the same amount of whole cloves in equal quantity.

How to use allspice in cooking?

Allspice has hints of other staple kitchen spices like cloves, cinnamon, and nutmeg.

Just a few allspice berries can infuse a dish with its warm flavor and sparkling texture. This berry, especially in ground form, complements a variety of dishes, both sweet and savory dishes.

Generally, it is added at the beginning of cooking or baking.

Ground allspice is used to season meat and vegetables.  It’s a nice addition to baked goods as a replacement for cinnamon, cloves, or nutmeg.

You can use it in cooking:

Can I use allspice as a substitute for nutmeg?

What can I use instead of mace?

What is related to cinnamon?

Can I use garam masala instead of Ras el Hanout?