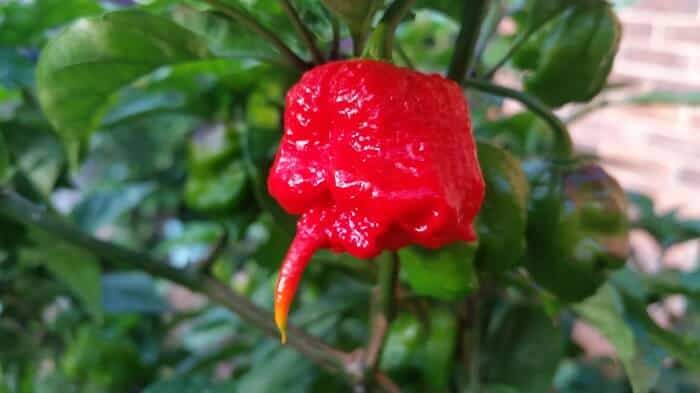 What Is 7 Pot Primo Pepper?

The 7 Pot Primo is a crossbreed between a Trinidad 7 Pot pepper and Naga Morich (sister chili of Ghost Pepper). The name Primo is the nickname of Troy Primeaux, a horticulturist from Louisiana who created this pepper.

In 2005, Troy Primeaux began cross-breeding these two hottest peppers to create one of the extremely hot peppers in the world.

Yellow 7 Pot Primo And Red 7 Pot Primo are two variants of this pepper; except for the color, they have similar shape and appearance however the yellow version is slightly hotter than the red.

Key facts of 7 Pot Primo peppers in a gist:

The pods of this pepper look like a regular 7 Pot pepper from Trinidad and its variants have either bright red or yellow/orange color. They have pimply and gnarly skin and scorpion-like tails. The pods are somewhat elongated with a lumpy texture with more wrinkles than regular 7 Pot Peppers. They measure about two inches long and about one and a half inches wide in the upper portion below the calyx. The pepper turns from green to vibrant red on maturing though the other varieties may turn into yellow or orange.

Like other 7 Pot Pepper, the Primo is sweet, fruity, and citrusy. Once the intense heat of this pepper subsides, you’ll begin to enjoy its fruity taste and floral aroma.

How Hot Is The 7 Pot Primo?

Being a cross between the two super-hot peppers in the world, the 7 Pot Primo is a wickedly hot pepper. At its peak, the heat level can go up close to 1.5 million SHU on Scoville Scale. Officially, the maximum heat level of 7 Pot Primo was previously recorded at 1,473,480 SHU.  By comparison, Primo is 295 times hotter than the common Jalapeno chili which has 5,000 SHU on average. Whereas, the habanero pepper has 250,000 SHU which is 5 times less than the heat of Primo. All 7 pot peppers are extremely hot and Primo is the hottest among all.

Other 7 Pot Primo Variants and Substitutes

Today, there are a couple of different varieties of Primo peppers after the original pepper was first introduced in the year 2005.  All the variants of this pepper have the same features and flavor except for the differences in color. The two common variants are the yellow and orange 7 Pot Primo peppers which have the same heat level as the original Red Primo and they all have sweet, citrusy, and fruity flavors characteristic to 7 Pot Peppers.

The latest variant of Primo pepper is the chocolate-colored pods which have a similar heat level but has a flowery aroma in addition. The chocolate pods in the garden are a rare attraction indeed.

Primotalii pepper, a cross between 7 Pot Primo and the Yellow Fatalii pepper is hotter than Primo. In appearance, Primotalii has long slender pods and devilish-looking long pointed tails.

The best substitute for 7 Pot Primo is another variant of the same pepper or any of the peppers from the family of 7 Pot chilies of Trinidadian origin.