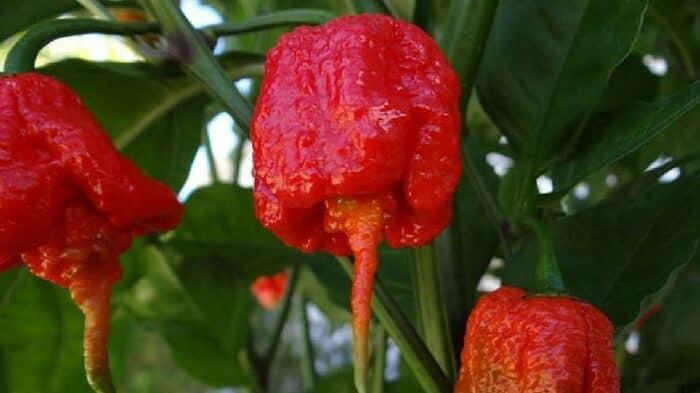 What Are 7 Pot Peppers?

The Trinidad 7 Pot Pepper, generally known as 7 Pot Pepper, comes from the Caribbean island state of Trinidad and Tobago. This pepper with wrinkly, pocked skin is one of the hottest chilies in the world just like the Trinidad Moruga Scorpion. More than the super-hotness, many love this chili for its nutty, fruity, and earthy taste.

This pepper got the name “7 Pot” because they say that just one pod of this pepper is enough to heat seven pots full of soups/foods. The name may not imply a super-hot bravado but it’s wickedly hot like Carolina Reaper and Ghost Pepper.

How Hot Are 7 Pot Peppers?

The original Red Trinidad 7 Pot Peppers are extremely hot with heat ranging between 1,000,000 to 1,200,000 Scoville Heat Units (SHU). At their peak, they are 480 times hotter than the common Jalapeno and they come very close to Moruga Scorpion. The chili oil from them can cause chili burn thus preferably wear hand gloves and goggles while you handle the fresh peppers.

What do Trinidad 7 Pot Peppers look like? In general, the 7 pot peppers have a habanero-like shape; about 2 inches long and one and a half-inch width. They are slightly elongated and mostly have a scorpion-like tail. They have wrinkly and pimply skin with a lumpy texture. Generally, they age from green to bright red but a few of its variants take different colors like yellow, orange, or chocolate as they mature.

What do they taste like? They are overwhelmingly hot but are enjoyably earthy, fruity like a habanero pepper with a lingering nutty flavor. In fact, 7 Pot Peppers are fruitier than all other super-hot peppers; also their heat quickly engulfs your taste buds.

The Trinidad 7 Pot pepper with its extreme heat and fruity flavor is excellent for fiery sauces, stews, and salsas. Dry, ground peppers are used to make chili powder, flakes, and spice mixtures, and seasoning blends. True to its name, just one pod is enough to make a large number of foods spicy. Note, this chili is strictly for people who can bear the spiciest foods; if you aren’t fond of spicy foods super-hot peppers are just not your cup of tea.

Where To Buy Trinidad 7 Pot Peppers?

Super hot peppers like 7 Pot, Carolina Reaper, and others aren’t sold in the regular vegetable markets, unlike Jalapeno or Cayenne. The demand for superhot chilies is limited.  Fresh Trinidad 7 Pot peppers are rarely found in groceries outside the Caribbean Islands. However, you can buy dry and ground 7 Pot Peppers from online vendors; also think of buying the seeds and growing them in your kitchen garden.

If you can’t get it, the best substitute for 7 Pot Pepper are Moruga Scorpion, Habanero peppers, or Carolina Reaper. They are extremely hot peppers and have the same fruity aftertaste.

Today, there are several varieties and strains of the 7 Pot pepper cultivable that exist. The most popular varieties are 7 Pot Douglah, 7 Pot Primo, 7 Pot Jonah, Chocolate 7 Pot, Yellow 7 Pot, and 7 Pot Brain Strain. Practically, all of them have a similar shape and gnarly appearance but differ in color. Some of the variants like 7 Pot Primo and 7 Pot Brain Strain are hotter than the original Trinidad 7 Pot.

Douglah with chocolate brown color and rich fruity taste is very popular with fans of super-hot peppers. The 7 Pot Primo is a cross between 7 Pot pepper and Ghost pepper and one of the hottest peppers in the world with all characteristic features of Trinidad 7 Pot.  The Brain Strain pepper is sharper than Naga Morich and is a lot similar to the acclaimed Carolina Reaper.