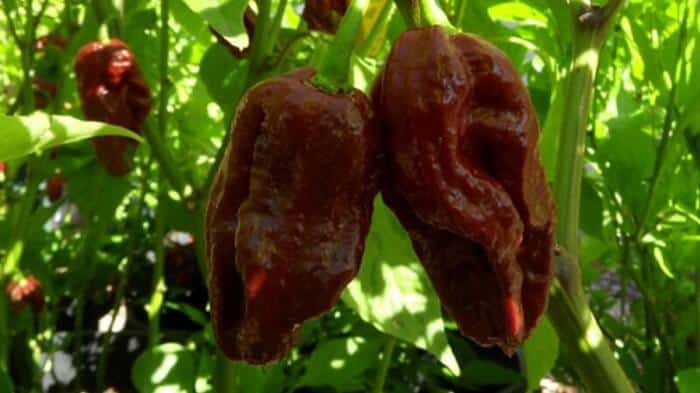 What are 7 Pot Douglah peppers?

The 7 Pot Douglah, also known as the chocolate 7 pot, is one of the hottest peppers in the world and is originating from Trinidad. The chocolate brown hue of this pepper is unique instead of the typical bright red color of other hot peppers. Despite the uniqueness in color, the chili has all the other features of other super hot peppers. Roughly it looks like a habanero in appearance and has a mixture of flavors that’s not only fruity sweet, but also slightly nutty.

The name “Douglah” is a Trinidad word that refers to a person of mixed race – a mixture of African and Indian descent.

Before maturing, it starts off with green but matures to the color of dark brown chocolate. Fully grown pepper is about two inches long and forms a wrinkled appearance. The plant typically grows to be about three to four feet tall.

Here are the key facts this pepper in a gist:

How Hot Is The 7 Pot Douglah?

The name of the pepper itself indicates that 1 pod is enough to heat 7 pots full of food. In the Caribbean, superhot chili varieties are commonly termed as 7 Pots

The heat level of 7 pot Douglah varies between 923,889 to 1,853,986 Scoville Heat Units (SHU). This pepper is roughly 235 times hotter than jalapeno pepper (2,500 to 8,000 SHU) and 5 times more than a very hot habanero pepper.  The average heat of this pepper is about half of Carolina Reaper which is considered to be super hot pepper. It’s extremely hot but much lower than extreme super hot peppers like Komodo Dragon, Carolina Reaper, Pepper X, Ghost Pepper, and Dragon’s Breath which all go beyond 2 million SHU at their peak.

Extreme hot peppers like 7 Pot Douglah should be taken seriously and use this pepper with caution. The oil from them can cause severe chili burns; advisable to wear gloves and kitchen goggles while handling them.

The 7 Pot Douglah is not only special for its chocolate brown color but also for its fruity, earthy and nutty taste. Like most other super hot chilies, the fruitiness of the pepper is a wonderful addition to any dish, especially to salsa, hot soups, and stews. You’ll find a strong relation between 7 pot Douglah and chocolate habaneros for the fruitiness and nuttiness common to them besides the chocolate color. The flavors hold on to your palate till the extreme heat kick in within a couple of seconds.

Super hot chili peppers like the 7 pots Douglah are popular for making hot sauces. Use it in stews and soups, or to make a super fiery salsa. Often they are dehydrated and powdered to make super hot chili powder that is popularly used as a seasoning ingredient or as a rub. The nutty and fruity flavor of this pepper works great for making tasteful chili soups.

If their heat is unbearable for you, then deseed and scoop out the inner membrane of the peppers, you will have less heat. Usually, the heat of the pepper is maximum in the whitish membrane and seeds.

While cooking with extremely hot chilies like the 7 pots Douglah, wear gloves and kitchen goggles for safety. The chili oil that contains capsaicin can stick to your skin and cause chili burn. Also, avoid rubbing your eyes and nose immediately after handling hot peppers.

Other peppers from the 7 pot pepper family are the best substitutes for 7 pot Douglah pepper. The 7 pot Barrackpore with pimpled, elongated, and wrinkled appearance and yellow to chocolate color comes as a very close match for Douglah. Trinidad Moruga Scorpion is another good alternative to consider for they have the same heat level and similar flavor profile.

For those who are not heat-inclined but still looking for chili with fruity and nutty flavor then they can get hold of chocolate habanero in place of the 7 Pot Douglah.

Where can you buy 7 Pot Douglah?

Unfortunately, it isn’t easy to find 7 Pot Douglah peppers outside Trinidad and a few other Caribbean islands. At best, you have to be satisfied with Douglah hot sauces and powders which are easily available with online vendors. If you are a diehard fan of super-hot chilies, then get the seeds of Douglah from online chili seeds suppliers and grow them in your garden. It’s worth growing this chocolate hued chili with fruity and nutty flavor but be careful with its wicked heat.