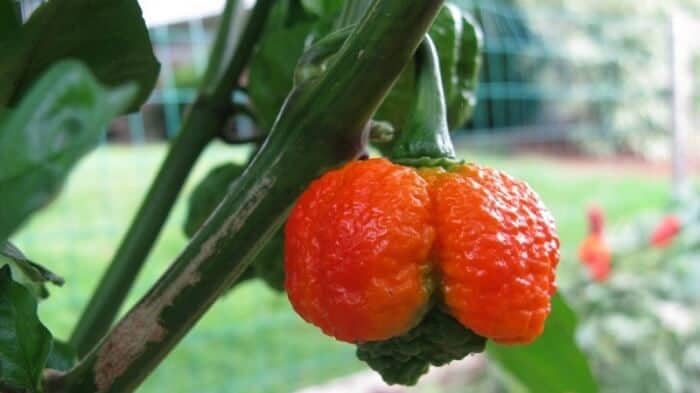 What are 7 Pot Brain Strain peppers?

The 7 Pot Brain Strain is an extremely hot pepper like other varieties of 7 Pot peppers. The heat level of this chile ranges between 1,000,000 and 1,350,000 Scoville heat units.  Besides the scorching heat, the fruity and slightly smoky after-taste of this pepper is delightful and enjoyable.

The name “brain strain” refers to the appearance of the chili similar to a human brain, bulbous with lumpy foldings and a larger internal membrane than most other 7 Pot peppers. Apparently, it looks like a miniature human brain.

The 7 Pot Brain Strain is a variant of the Trinidad 7 Pot Pepper created by David Capiello, a chili grower from North Carolina, in 2010. To develop this pepper, repeated selective breeding methods were applied on the original 7 Pot Chili procured from Trinidad. Finally, Brain Strain chili was created with its specific features that eventually turned out to be one of the hottest chilies on the planet.

Key features of 7 Pot Brain Strain Peppers in a gist:

How hot is the 7 Pot Brain Strain?

At their peak, the Brain Strain peppers are hotter than Ghost Pepper and about 540 times hotter than Jalapeno. The average heat level of 7 Pot Brain Strain is almost the same as Trinidad Moruga Scorpion peppers. Super-hot peppers should be used with caution as the oils from them can cause chili burn on your skin. Usually, wearing hand gloves and goggles is a good precaution to be on the safer side. The Pot peppers are so hot, it’s said that one pod of this pepper is enough to heat up 7 pots of stews.

In appearance, the Brain Strain is unique from the other 7 pot peppers. They look like miniature human brains with a folded and bulbous texture outside and a thick, large white membrane inside.

The name seems to be funny and silly but their Scoville heat level is terrifying. A suitable comparison for this pepper is the Bulgarian carrot pepper; the name sounds sweet but it packs enough heat. In truth, the extreme heat of this pepper can really strain the brain and punch your palate.

Moruga Scorpion is a lot similar to the Brain Strain pepper in color, wrinkled texture, flavors, and heat level.  Overall, this pepper has a box-like lumpy shape with folds similar to the structure of the human brain. The original version of this pepper starts out green and turns deep red when mature. Some variants of the Brain Strain take yellow or chocolate hue on maturing.

What makes this pepper so special is not only its scorching heat but also its fruity and slightly smoky flavor. Like the other 7 pot peppers, it is also earthy with a bit of underlying nuttiness.

Extreme hot peppers are rarely used in regular cooking as you do with Jalapeno or Cayenne Peppers. Obviously, most people will find it hard to tolerate the high heat level of the Brain Strain. Use it in hot sauces, stews, soups, and salsa. Often, the dried pepper is ground into chili powder or flakes to be used in hot spice mixtures or seasoning blends. A small dash or two is enough for most meals.

Where To Buy 7 Pot Brain Strain?

In general, fresh 7 Pot peppers are not available in most places except in localities where they are commercially grown. The Brain Strain peppers are mostly grown by local farmers in a few areas of North Carolina. You can purchase the dry or ground version of this pepper from online vendors in e-commerce platforms like Amazon, Walmart, or exclusive Chili sellers. Think of buying the seeds of this chili from online plant seeds sellers and growing them in your kitchen garden. Or you can use other varieties of 7 pot peppers as a substitute for Brain Strain pepper.  Trinidad Moruga Scorpion is also a good alternative to 7 Pot Brain Strain.