Marijuana also known as cannabis or weeds has been an obsession for many.  As per the marijuana users’ statistics provided by statista.com, roughly 234 million people consumed cannabis in the same year worldwide.

According to evidence from studies, the human body has endocannabinoid receptors that accept the cannabinoids from the weeds. The human body processes cannabinoids in several ways and produces many byproducts that stay in the body for a long time.

So how long does weed stay in your system? How long marijuana lasts in your body depends on several factors and on which system we’re taking into consideration.

How long does weed stay in your system?

Drugs and metabolites of substances you use are traceable in blood, urine, saliva, or hair through lab tests. These drug tests will provide a definite answer to your question – how long does marijuana last in your system.

According to research, Weed contains a psychoactive and high-producing chemical known as Tetrahydrocannabinol (THC). This chemical is one of at least 113 cannabinoids identified in cannabis.

The metabolization of THC takes place very quickly in your body. After taking cannabis, you don’t stay high for a long time because your body quickly metabolizes all the psychoactive substances you inhaled or ate.

However, the metabolites of cannabinoids can stay in your fatty tissues or hair follicles for a long time. These metabolites do not have any psychoactive ability but are clear indicators of previous cannabis use.

The time taker for wearing out of marijuana differs according to health conditions, dose, frequency, and duration

So, how long does marijuana stays in your system? It depends on what system of the body you take into consideration. Again, it may differ for THC, weeds’ waste metabolite or THC-COOH.

According to the frequency and dose of marijuana use, it is detectable in bodily fluids for 1 to 30 days. Its metabolites may be detectable in hair for several months.

The marijuana detection window depends on how often you smoke or how much you ingest.

If you are taking it in higher doses and more frequently then it stays in your system for a longer time.

People who are addicted to cannabis with daily use may show its traces in their system for several months after the last use.

Let us now analyze the detection windows for cannabis in hair, urine, blood, and saliva.

How long does weed stay in your urine?

It should be noted that your body is eager to absorb and process psychoactive THC and other active cannabinoids from the weed you consume.

Technically speaking, only the metabolites of weed like THC-COOH are detectable in urine.

According to Mayo Clinic Proceedings the presence of weed in your system is detectable in urine for the following amounts of time from last use:

How long does marijuana stay in your blood?

Blood testing is apt for detecting the recent use of marijuana by anyone.

The cannabinoids in weed get into the bloodstream within seconds after smoking or ingesting it.

Undoubtedly, you get quick euphoric sensations of being high after having weed because of the fast movement of active cannabinoids via blood to the brain.

A report published by Therapeutic Drug Monitoring says the cannabinoids from weed stay in the blood up to 48 hours after the last use.

However, in some rare cases, it’s been detected after 25 days; it happens with chronic heavy users of marijuana.

How long does cannabis stay in your saliva?

First and foremost, saliva is typically linked to blood concerning the time span weed sticks around in it. A saliva test looks for the same active THC that a blood test does.

Within a few minutes after smoking or ingesting the weed, its metabolites appear in saliva.

Also, when you smoke weed, Delta-9 THC, the psychoactive kind, coats the inside of your mouth and gets soaked up by your saliva glands.

According to the evidence available from saliva test results the detection window for marijuana in the saliva is:

Generally, THC will stay in your saliva for one or two days after your last puff.

How long does THC stay in your hair?

Proof for cannabis consumption stays for the longest time in your hair. In the case of chronic heavy users, hair follicle tests may show up traces of weed up to a year through advanced hair testing methods.

However, common hair tests for drugs can typically reveal the history of cannabis use up to 90 days back.

According to evidence from clinical drug tests, the metabolites of drugs can stay in hair follicles for up to three months.

On average, hair grows approximately .5 inches per month. Therefore, a one-and-a-half-inch hair segment took close to the scalp may give a window for marijuana use for the past three months.

How long does weed take to metabolize?

The active substance in weed is delta-9-tetrahydrocannabinol (THC). THC is one of the 113 chemical compounds found in weed.

Within a few minutes after having weed THC gets into the bloodstream and then reaches the brain to produce psychoactive effects.  Some portion of it is temporarily stored in organs and fatty tissues.

Importantly, THC reaching the kidneys may be reabsorbed into the bloodstream once again to some extent.

Finally, THC and its metabolites go out of the body via urine and stool

‘For how long weed stay in your system’ is not identically the same for all users.  There are a few individual factors that influence it.

A person’s age, gender, and body weight play a major role in the metabolization and elimination of a drug in the system.

Individual habits of using weed are closely related to the retention and elimination of the drug in the body. For example, the metabolites of marijuana stay for a longer time in the system of the chronic heavy user.

In addition, certain species of weed have a higher amount of THC in them. Apparently, persons using weeds with a higher concentration of THC retain it in the body for a longer time.

Similarly, ingesting weed puts higher deposits of THC in the system than smoking.

It should be noted that persons with a weak function of the liver or kidneys will take a much longer time for metabolizing and eliminating the weed from the system.

How to help weed to metabolize faster?

There isn’t any special technique to boost the process of metabolizing THC in your body.

If your liver and kidneys are functioning healthy, you can expect a faster elimination of THC from your body. However, the body takes its own sweet time to complete the elimination process.

Apart from these, eating healthy, keeping your body well hydrated, and getting enough physical exercise can quicken this process to some extent.

How long does it take marijuana effects to wear off?

Chronic weed users develop a progressive tolerance to THC. Therefore, the effects of the weed last for a shorter period for them.

The height of the euphoric effect also depends on the dose and frequency of consuming it.

The long-term effects of weed in your system can last for several days, weeks, or months. Chronic users may suffer lifelong side effects of cannabis.

There are several detox remedies available for getting rid of the side effects of weeds.

Keeping your body well hydrated, eating a healthy diet, and exercising daily can reduce the THC effects on your body. You may also find herbal supplements that contain creatinine or vitamin B-12 to dilute the harmful effects of weed. 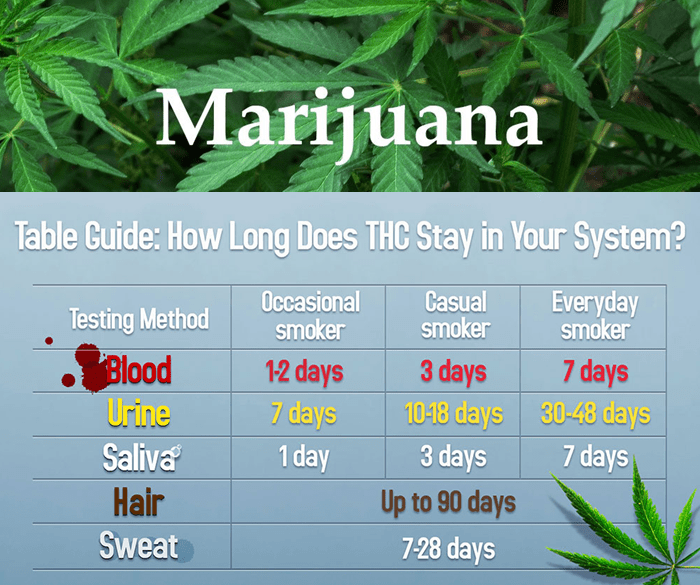 In conclusion, THC from marijuana may stay in your system anywhere from several days to several months after last use.

The detection window for weed depends on the type of drug test used and other factors specific to the user.

Besides, frequency, dose, mode of use (smoking/ingesting), and duration of using the weed matters.

So how long does weed stay in your system?

Active THC stays for 2 to 4 days in blood and saliva. But in urine, the traces of weed stay for a week or more. And with hair, it’ll stay with you for up to 90 days.

How To Quit Smoking Weed?