According to a survey conducted by IMS Health Market Research Company (USA), in 2014, Vyvanse is the 10 most prescribed drug in the United States of America.

As per a report published by CNN, the stimulant Vyvanse is No.5 position among the most used drugs in the US with over 10 million prescriptions per year.

Vyvanse is a stimulant that can cause addictive tendencies in some patients. Similarly, ingredients in the Vyvanse deposited in the cells of your system can cause a few adverse effects on health.

Before you use this drug, it is good to know how long does Vyvanse stays in your system.

In this article, let us see how much time do Vyvanse residues and their metabolites can stay in your system, including blood, urine, hair, and saliva.

Vyvanse, also known as Lisdexamfetamine, is a Psychostimulant medication.

It is used for the control, improvement, and prevention of syndromes such as ADHD (Attention deficit hyperactivity disorder) and overeating.

Lisdexamfetamine is the chief compound contained in Vyvanse.

Vyvanse is effective for treating ADHD in children 6 years and older. It is approved by the FDA in the priority approval program.

In the case of treating Binge Eating Disorder (BED), it is prescribed for people above 18 years old. However, it is not at all a medicine to be used for obesity or weight loss despite its effectiveness in managing binge eating disorders.

This drug is available in different forms like tablets, capsules, liquid, and bandages.

Do not take Lisdexamfetamine beyond the period recommended by your doctor. Abuse or overuse of this medication can lead to drug dependence or addiction.

Vyvanse does not contain an active amphetamine unlike other popular ADHD medicines like Ritalin and Adderall.

Before we go on to discuss how long can Vyvanse stay in your body, blood, urine, or saliva, let us explore a few more essential facts about this drug. How Does Vyvanse Work?

Lisdexamfetamine contained in this drug is composed of two other compounds, namely Dextroamphetamine and Lysine. This compound in Vyvanse remains inactive.  However, once they are activated within the body they help to increase the concentration of dopamine and epinephrine in your body.

Epinephrine and dopamine are neurotransmitters released by the brain which generate and boost neuro-physiological arousal. Thus ADHD is treated in your system.

Vyvanse improves your mood and increases concentration.  This drug gives quick relief from depression and anxiety.

Because of its mood-enhancing effect, some patients may develop a dependency on this pill.

How Does Vyvanse Affect the Brain and Body?

It is good to know how Vyvanse affects the brain and body and how long the effects last.

Vyvanse is an amphetamine that helps to balance the dopamine and norepinephrine chemical substances in the brain. This drug increases the production and release of dopamine which in turn promotes a feeling of pleasure and relaxation. It relieves the symptoms of ADHD; reduces hyperactivity and impulsivity.

However, an overdose of this drug produces counter effects like an increase in irritability, anxiety, and sleep disorders.  Abuse of Vyvanse can cause hallucinations, panic attacks, paranoia, and delusions.

How long do the effects of Vyvanse last in your brain?

After you have stopped using the drug, the effects created on your brain continue to last for 3 days at a diminishing rate.

How much is the Half-Life of Vyvanse?

The ‘half-life of a drug’ refers to the time it takes for the concentration of the drug in the body to reduce to one-half.

In most cases, five half-lives are required for a drug to be fully detoxed or eliminated from your system.

Half the dose of Vyvanse disappears from your system within 1 hour after consuming it.

According to some scientific estimates, in less than 5 hours 95 percent of Vyvanse will be eliminated from your system. However, its metabolites continue to stay in your system for some more time.

How Long Does Vyvanse Stay in Your System?

Any drug that a person consumes will stay in the system for some time.

Now let us see, ‘how long does Vyvanse stay in your urine, hair, and blood.’  Does Lisdexamfetamine stay in the system even after stopping the intake of the drug?

A drug test can detect the presence of Vyvanse in your system including the metabolites left behind by it.

Each drug influences the system in different ways and there is no common rule to define how long each drug stays in your system.

There are a few conditions that determine the partial retention of a drug in the system for a period.

For example, Vyvanse is quickly absorbed by the body when it is taken one hour before the meal. In such a scenario, the retention of this drug in the stomach may last for less than 30 minutes.

Whereas, when Vyvanse is taken during or after the meal the absorption of this drug by the body takes a long time; up to 4 hours.

According to some of the tests, after every 12 hours, the average amount of Vyvanse present in the body is reduced by half.  Going by this estimate, the Vyvanse will not be potentially present in your system after 36 hours of consuming it.

Most parts of Vyvanse get eliminated from your body through excretion. It is difficult to trace out Lisdexamfetamine in your body after 8 hours of ingesting it.

Some tests have shown that 50 percent of Vyvanse will get eliminated from your system with 1 hour after ingesting it.

However, the metabolites of this drug can be traced in your system for a much longer time.

The enzymes in the red blood cells metabolize Lisdexamfetamine into two compounds, namely Dextroamphetamine and Lysine. These two compounds are the metabolites of Vyvanse that will stay in your system for a longer time.

Tests for Tracing Vyvanse in Your System

A drug test is done by making a technical analysis of a biological specimen, such as blood, urine, saliva, hair, breath, sweat, and others.

Let us now look at biological specimen tests usually performed for ascertaining the presence of Lisdexamfetamine in the system.

A blood test is not a preferred test for detecting the existence of Vyvanse in your body.  A blood test cannot detect Lisdexamfetamine after 8 hours of ingesting the pill.

Similarly, the compound Dextroamphetamine and Lysine can be detected in the blood only if the test is done within 24 hours of having the drug.

A urine test is considered to be the best biological specimen test for discovering the presence of Vyvanse in your system.

A urinalysis test can indicate the presence of Vyvanse metabolites in the urine sample.

However, the acidity level or pH value of urine affects the positive or negative outcome of the test.

A urine test can detect the presence of Lisdexamfetamine metabolites up to 3 days since the last use of the drug.

A saliva test is better than a blood test for detecting Vyvanse in your body. Testing saliva can detect the existence of dextroamphetamine and Lysine compounds present in your system for up to 48 hours.

For this test, High-Performance Liquid Chromatography (HPLC) technique is used.  Using this method, the metabolites present in saliva can be detected in less than 16 minutes.

A hair test for detecting the presence of a drug is a complicated process. This test is rarely done.

Usually, the metabolites of a drug deposited in the hair follicles can be detected for up to 90 days.

The drug metabolites deposited in the hair follicles do not have any impact on your system.

The technique of Mass Spectrometry/ Gas Chromatography is used for analyzing the hair follicle.

However, it is difficult to detect the presence of Vyvanse in the hair follicles if you have very high melanin pigment in the body.

This test can be done only after a minimum of one week after consuming the drug.

Factors Influencing the Retention of Vyvanse

Few factors determine the retention of a drug in the system for a period.

Each individual has varying health conditions that are crucial to the absorption and retention of a drug in the body.

Individual factors that determine the effect of a drug on the body are:

Elderly people take a longer time for time for eliminating drugs like Vyvanse from their system because of poor renal and liver function.

Similarly, people with poor BMI scores or obesity issues will retain the residues of Vyvanse in the body for a longer time.

Persons who have been taking Vyvanse regularly for a considerably long period will retain the properties of this drug for a longer duration.

Consuming a higher dose of the drug will extend the elimination period of the medication from your body.

A person with a well-hydrated body will excrete the properties of the drug at a faster rate from the system.

An individual with a healthy liver and kidney function enjoys faster absorption and elimination of the drug from the body. 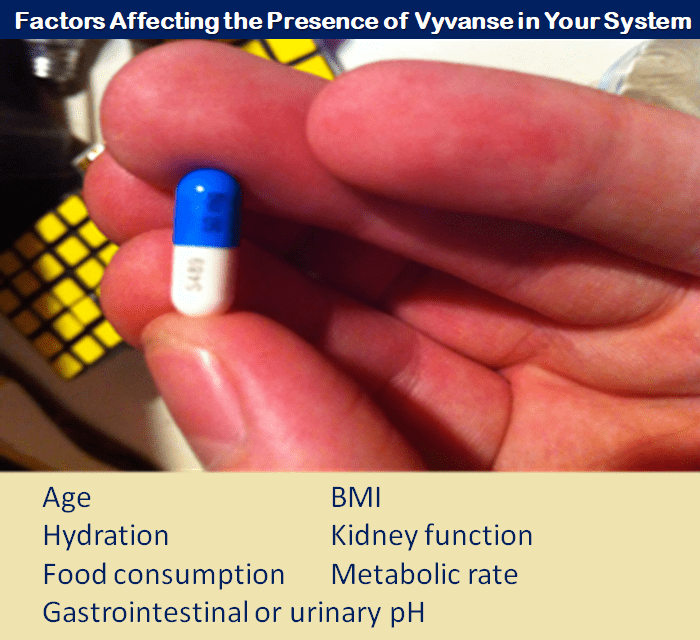 How to Clear Vyvanse from Your System?

You can expedite the elimination of Vyvanse from your body by adopting a few remedial steps.

Completely stop the usage of Vyvanse if you want to eliminate the properties of this from your system.

However, if you are not completed the course of medication prescribed by your doctor, do not stop it abruptly without consulting the doctor.

One of the fastest ways to get rid of any drug from your system is by acidifying your urinary pH. It drastically reduces the half-life of the metabolites of the drug.

It is possible to eliminate 9o percent of Vyvanse from your system in less than three days by using this method.

You can decrease the pH factor in urine by correcting your diets, taking Betaine supplements, or dirking soda in moderation.

Vyvanse is ultimately eliminated from the system via urine.

Drinking more water and taking liquid foods can increase the frequency of urinary flow for the faster excretion of metabolites of this drug.

How long does Vyvanse stay in your system largely depends on the dosage and frequency of using this drug?

Age, health conditions, cross effects of other drugs, pH levels in the urine, and metabolic rate of the individual are other key factors that determine the retention period of a drug in the system.

On average, 90 percent of the Vyvanse metabolites get excreted from the body within three days after you stopped taking this drug.

Your system will be totally free Vyvanse within 7 days of consuming it. However, an insignificant number of metabolites of this drug can stay in your hair follicle for up to 90 days. The drug metabolites deposited in the hair follicles do not have any repercussions on your health.

How Long Does Valium Stay In Your System?

How Long Does Nicotine Stay In Your System?