Enlargement of hemorrhoidal tissue due to various reasons cause the disease known as hemorrhoids or piles.

Along with tissues, the blood vessels in the walls of the rectum also swell up.

For many reasons, hemorrhoidal tissues become enlarged because of excessive pressure and muscular stress. This condition also causes severe pain and inflammation, itching, and bleeding in the rectum and anus.

Severe external hemorrhoids lead to the formation of hard lumps around the antrum, which causes a lot of pain and irritation.

Hemorrhoid lumps are mostly made up of hard blood clots formed inside, eroded skin tissues, and enlarged veins.

Prolapsed hemorrhoids occur when internal hemorrhoids protrude and project outside the rectum.

In this article, we are going to look at specific pile conditions such as hemorrhoid bursts, ruptured hemorrhoids, and popping hemorrhoids.

What is a hemorrhoid burst or ruptured hemorrhoid?

Different types of hemorrhoids can burst when the hemorrhoidal tissues have enlarged and stretched to their maximum.

A PubMed Health report suggests that continual straining to have a bowel movement causes them to stretch and swell. Both internal and external hemorrhoids can open up and bleed.

The inflamed and swollen tissues of the rectum and blood vessels may burst when they are stretched or pressurized. The pressure from the hemorrhoid banding treatment could also lead to it. This can cause severe pain and bleeding.

Burst piles make fresh red blood ooze out from broken veins in the walls of the rectum.

On a positive note, the rupturing of piles helps quickly reduce pain, itching, irritation, and swelling. It relieves the tension experienced by fully enlarged blood vessels and hemorrhoidal tissues.

Your ruptured hemorrhoids can cause a lot of embarrassment, especially when it transpires in public places.

In most cases, bleeding from a burst hemorrhoid can last anywhere from a few seconds to several minutes. However, it can ooze out a lot of blood depending on the severity of the disease.

It is not a life-threatening condition, but you need to avail yourself of medical solutions to manage the issue.

In any case, immediate medical attention is desirable, It is best to consult a proctologist if you have got ruptured hemorrhoids.

How will you diagnose ruptured piles?

The general symptoms of hemorrhoids are swelling, burning, pain, and intense itching near the anus.

Hemorrhoids can be terribly annoying for most people.

If you notice clear red blood suddenly oozing out from the anus, it is an indication of burst piles.

It usually happens with internal hemorrhoids when the hemorrhoidal tissues have enlarged to the extent of bursting.

According to a report published by Hayward Medical School, “Hemorrhoids are distended blood vessels that form either externally (around the anus) or internally (in the lower rectum).”

The report further suggests that the swollen blood vessels in the rectum are at the nick of bursting with any kind of pressure exerted on them.

Bursting of piles can occur during a normal bowel movement or when they are under pressure.

It happens when excessive pressure is experienced by swollen veins and tissues in the rectum.

The wall of the veins in the rectum becomes weak for reasons such as inflammation, infection, fatty tissue, constipation, uncomfortable bowel movements, medications, or lifestyle issues.

A pile burst is a small tear in the blood vessel walls that releases blood into the rectum.

Sitting on the toilet or office chairs for a long time can also exert pressure on hemorrhoidal tissues, which leads to the rupture of the swollen blood vessel.

Pregnant women often suffer from ruptured hemorrhoids because of the heavy pressure from the baby in the womb.

Obese people who get hemorrhoids are also highly vulnerable to pile bursts because of the pressure from the heavy fat mass surrounding the abdominal and rectal region. 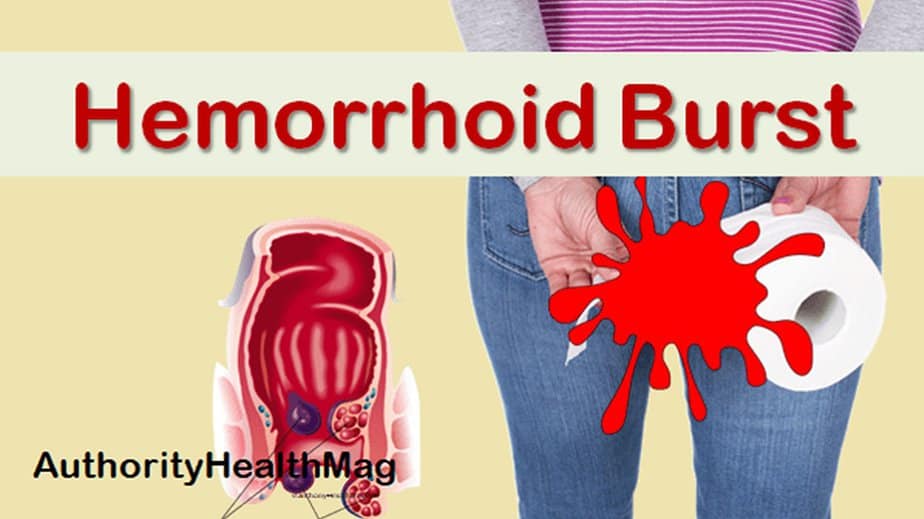 Prolapsed hemorrhoids may protrude hemorrhoidal tissues outside the anus canal. It retreats after the bowel movements or after some time.

External hemorrhoids can form lumps of varying sizes. They are painful and itchy.

So you might also be asking the question, “Can hemorrhoids pop?”

Hemorrhoids may burst by themselves, but you should not pop a hemorrhoid as you do with pimples.

Popping them can aggravate the inflammation and damage the veins and tissues. Let the natural burst happen, which creates only small tears in the veins.

But if you pop hemorrhoids, it may create deep wounds and increase inflammation. Hemorrhoid treatment is always best left to the doctor.

Can you pop a thrombosed hemorrhoid?

Thrombosed hemorrhoids are those that become prolapsed, bulging, and painful.

Thrombosed piles will burst on their own and ooze out blood.

You need not pop a thrombosed hemorrhoid as you would with a boil or a pimple.

The hemorrhoids will pop and bleed when they become too full of blood or pus.

Hemorrhoids are most painful and irritating when they become fully blown up in the days leading up to bursting.

In most cases, the patients will seek medical intervention to shrink the piles before they burst. So we rarely hear of piles bursting.

Should you attempt to pop hemorrhoids?

You may think of popping the hemorrhoids if they have become severe bumps. However, it should be done by a doctor instead of you.

If you try to pop thrombosed piles by yourself with a pin or needle, it might make the problem even worse.

A trained and experienced physician can help you the most in getting rid of prolapsed or enlarged hemorrhoids.

Ruptured hemorrhoids can cause bleeding for some time. They bleed whenever they are hurt by stretching or external pressure.

You can use the same medications used for external hemorrhoids, like creams or medicated wipes, to manage them.

If your burst hemorrhoids continue to bleed, you should stay in bed with your feet elevated on pillows.

Try to lessen the symptoms of piles bursting by taking a sitz bath.

Use moistened soft towels to gently wipe the bleeding hemorrhoids instead of dry toilet paper. Keep the area clean.

Applying an ice pack or cold compress helps in reducing the pain and brief periods of bleeding.

Most hemorrhoid patients suffer from mildly swollen piles that usually resolve themselves within a week.

Your doctor may prescribe pain relief medications associated with hemorrhoids.

Mild hemorrhoids can be fully cured with simple natural remedies and by making proper adjustments in diet and lifestyle habits.

If you have burst or severely swollen hemorrhoids, you should seek the assistance of a physician to get a proper diagnosis and treatment.

Some of the popular prescription treatments for ruptured hemorrhoids are:

Surgery is not an option to treat hemorrhoid bursts. The hemorrhoids may become chronic after the burst, but they start healing within a day or two.

Surgery is rarely required in this case. However, surgery may be needed if the hemorrhoids continue to swell and fresh bumps keep erupting after the burst.

Should you see a doctor for burst hemorrhoids?

You should necessarily see a doctor if you have rectal bleeding resulting from burst piles.

Most patients who visit a doctor for hemorrhoid problems are often diagnosed with other health issues that need immediate attention.

The fresh red blood oozing from the rectum is most probably the result of ruptured hemorrhoids.

Your physician can make a proper diagnosis through physical examination and analysis of symptoms.

What are the post-treatment concerns for burst piles?

After you have healed ruptured hemorrhoids, it is necessary to have follow-up treatments and care.

Some of the following recommendations will reduce the chance of recurring hemorrhoidal inflammation:

Is blood in my stool a serious health issue?

The presence of blood in the stool is an indication of an underlying health issue.

Do not panic if you notice some traces of blood in your stool occasionally. Most often, it is only a trivial health issue caused by constipation or hard lumps of stools.

Drops of bright red blood oozing out of the anus are a strong indication of an internal hemorrhoid burst.

A bleeding hemorrhoid is not a severe health issue. With proper medication and care, the symptoms of hemorrhoids quickly subside within a week.

However, if you notice light red, brownish, or pink-colored blood in your stool, this may be an indication of stomach ulcers or various types of internal cancers. Seek immediate medical assistance in such cases.