OxyContin is a controlled release formulation of oxycodone. It is specially formulated to give a slow delivery of oxycodone over 12 hours. Because of its overdose issues and addictive nature, you may be eager to know for how long does OxyContin stays in your system.

Drug testing of blood, urine, saliva, and hair can detect the presence of this opioid drug in your system. There is no precise answer to the question, ‘how long does OxyContin stay in your urine, blood, or saliva.’ It varies according to several variables pertaining to each user.

The chief ingredient in this opioid is oxycodone. The differences between Oxycodone and OxyContin mainly lie in the delivery speed of their effects.

OxyContin is an extended-release formulation of opioids that gradually delivers the pain relief effects over 12 hours. Oxycodone can be combined with Tylenol and ibuprofen; less strong than OxyContin.

Like morphine, OxyContin acts on opioid receptors in the brain to produce the pain-relieving effect. However, when this opioid is taken at a higher dose, it may produce a feeling of euphoria. The U.S. Food and Drug Administration (FDA) has classified this drug under the Schedule II list; strictly a prescription medicine with a high potential for abuse.

Features of Oxycontin as published by the FDA:

Despite the strict vigilance of law enforcement authorities, OxyContin has become a formidable drug of abuse due to its euphoria-inducing effects.

Regular use of OxyContin can lead to overdose, dependency, and drug interaction. In such a scenario, it is essential to learn how long this opioid stays in your body.

The half-life of a drug is the time required for half of the full dose to be eliminated from the bloodstream. It is the measure of time for the plasma concentration of OxyContin to reach half of its original concentration.

Approximately, the mean half-life of OxyContin tablet is 6.5 hours, and steady-state is achieved in about one day. It takes almost double the amount of time its parent drug Oxycodone takes to reach the half-life cycle.

The half-life duration and elimination of the drug from the body may vary for each. Here are some of the factors that can affect the length of time OxyContin remains in your body:

How long does OxyContin Stay in Your System?

We can roughly estimate how long OxyContin stays in your body by checking the estimated detection windows in drug testing methods.

Usually, the most reliable drug screens for opioids like OxyContin are urine-based.

The average half-life of OxyContin is 6.5 hours approximately. So, OxyContin is expected to take about 40 hours to get fully eliminated from your system. However, the metabolites of this drug can stay for a much longer time in your body.

The dose and frequency of using OxyContin are the key factors that determine for long this opioid will stay in your system.

How long does Oxycontin stay in your urine?

The length of time a drug can be detected in urine varies according to various factors. These deciding factors are urine pH, hydration, metabolism, dosing, duration use, and drug’s particular pharmacokinetics

The oxycodone contained in OxyContin can be traced in the urine for up to 3 days. Oxymorphone, the metabolite of oxycodone can also be found in urine.

The presence of OxyContin can be detected in urine for up to 4 days.

If you have been taking OxyContin for a long period and in high doses, its metabolites are traceable in the urine for up to 10 days.

How long does OxyContin Detectable in Blood, Saliva, and Hair?

Oxycodone is traceable in hair follicles between 1 to 3 months. However, hair drug test is a complicated and expensive procedure. The hair test for an opioid is reliable for routine testing.

A saliva drug test can detect oxycodone and its metabolites for up to 3 days. The extended-release nature of OxyContin makes it traceable in the saliva for a longer period. 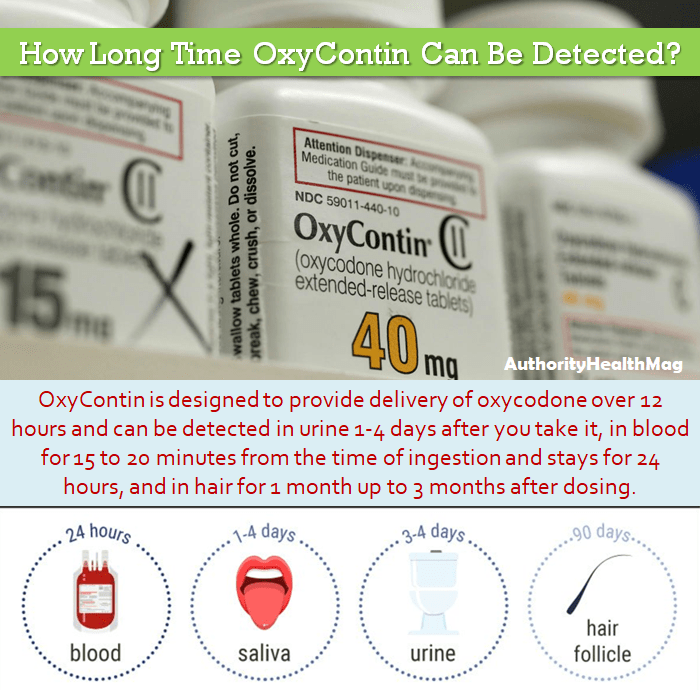 Can You Overdose on OxyContin?

You should never overdose on OxyContin beyond the dose recommended by your doctor. In fact, it is better to reduce the dose of the drug as the pain subsides.

Patients who are regularly taking this opioid drug are vulnerable to overdosing on the drug. The euphoric effect caused by the drug can make the user addicted to OxyContin.

According to the CDC, the United States of America is on its way to an opioid overdose epidemic. Available estimates released by CDC indicate that over 33,000 people died due to opioid overdose in the year 2015.

OxyContin works by altering the brain and nervous system. However, anyone taking overdoses of OxyContin may put him/her in fatal health conditions.

The following ways you can avoid overdosing on this opioid:

Overdosing of OxyContin may cause the following health conditions:

As soon as you notice serious physical discomfort, you must stop ingesting the drug. You must meet the doctor soon after you experience any symptoms of OxyContin’s side effects.

OxyContin overdose can cause fatal health conditions. The euphoric effect produced by this opioid drug can make you addicted to it.

Thus it is useful to know ‘how long does OxyContin can remain in your system’.

OxyContin is a sustained, controlled-release formulation of oxycodone. A single dose of this drug can produce a sustained pain relief effect for up to 12 hours.

The metabolites of OxyContin can be detected in urine 1-4 days after you take it. Its presence can be traced in blood for 24 hours, in saliva for 1 to 4 days, and in hair follicles for 1 to 3 months.

Is Oxycodone excreted in urine?

How long Methadone is detectable in urine?

How long Molly stays in blood?

Is Percocet detectable in a drug test?