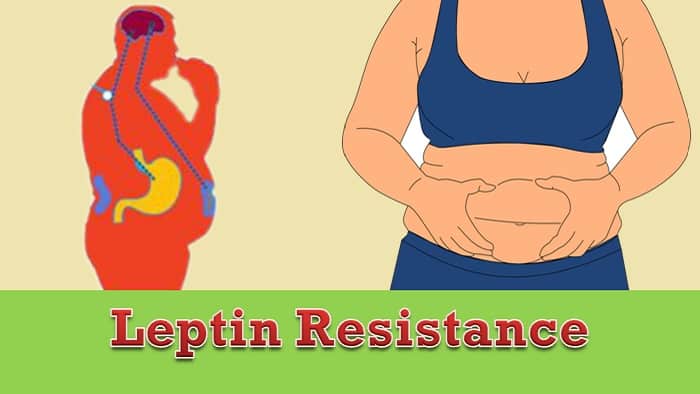 Recent studies on obesity have come out with conclusive evidence to prove that hormones like Leptin and Insulin are more responsible for obesity than calories.

Leptin hormone is identified as the No.1 reason for weight gain, especially in older people.

The health scientists researching obesity factors have verified a physical condition in which the Leptin hormone loses its effectiveness and becomes resistant to its reciprocal communication with body cells and the hypothalamus in the brain.  This particular hormone disorder is said to be the reason for uncontrollable eating habits and weight gain.

Leptin is a protein-type hormone that floats and flows in the bloodstream. It is made by adipose cells that help to regulate energy balance by inhibiting hunger.

This hormone is very valuable to the body as it performs several important functions to keep a person healthy and fit.

When the hypothalamus senses the levels of this hormone are higher than the optimum level in the blood, it is an indication for the brain to inhibit the feelings of appetite.

To have a healthy appetite mechanism in our bodily system leptin releases the synthesis of an appetite suppressant called α-melanocyte-stimulating hormone.

This hormone’s healthy functioning (with counteractive and stimulatory mechanisms) is essential for proper appetite and metabolism in our body.

The leptin hormone also modulates the size of the adipose tissues in our body.

Woman with higher levels of Leptin hormone attains puberty earlier than others. This hormone is also important for healthy menstrual cycles and better fertility chances for a woman.  There is a strong link between higher fat storage with good reproductive growth that regulates reproduction.

It is the low levels of leptin in the blood that make a person feel hungry. As the person eats, the levels of leptin quickly go up, and when it reaches the optimum level, the feeling of satiation sets in, and appetite is fully suppressed.

Without the leptin hormones, we would feel hungry always and never reach the satiation point… our eating limit will be till there are no more places to fill in.

What is Leptin Resistance?

The fat cells in the body (adipose tissues) produce more and more leptin as the fat storage increases.

Obese people normally have very high levels of leptin floating in their blood.

When the level of leptin is high in the bloodstream, it is an indication for the brain that these people need not eat till the leptin level goes down. It is the right thing that generally happens in every healthy person.

However, due to some reasons, the ‘leptin signal’ to the brain stops working in some people. Despite the abnormally high amount of leptin floating in the blood, the brain does not “see” it.

This particular condition usually found in most obese people is known as ‘leptin resistance.’  It is understood to be the No.1 reason that makes most people obese.

The brain erroneously thinks that the body is starving, despite the massive amount of energy that is already stored in the fat cells.

Because of this, the energy storage and expenditure in the body are mismatched with the feelings of appetite generated by the hypothalamus.

We can normally notice that most obese people have an elephantine hunger that makes them gorge on food very frequently.  It is because of the ‘leptin resistance’ in their bodies.

There are a couple of reasons for leptin resistance as per the different study results, and every other fresh study seems to suggest a new reason altogether.

1. The leptin hormone loses its identity as it gets intrinsically bound with protein. Because of this, the brain is not able to differentiate and identify the leptin in the bloodstream.

2. The existence of any inflammatory signaling in the brain can be another reason for the hypothalamus to become insensitive to the leptin levels in the blood.

3. High levels of free fatty acids in the bloodstream could increase the fat metabolites in the hypothalamus, and this could eventually interfere with leptin signaling.

4. Having elevated levels of leptin constantly in the bloodstream could itself cause leptin resistance. The genetically set optimum leptin level point could get shifted in the person as leptin levels consistently stay high for a long period.

5, In rare cases, leptin resistance could be genetically inherited. As per the laws of feedback signaling, an ob gene mutation producing leptin that is secreted, but with poor signaling capacity, could lead to hyperleptinemia and leptin resistance.

6. It is also possible that leptin develops a self-regulation mode like the other biological signaling pathways. When leptin begins to have its receptor and signaling, it may promote pathological leptin resistance.

8. Many of the studies’ results have suggested leptin resistance could be born out of limited tissue access; such as at the blood-brain barrier. The Ob-Ra transport mechanism in the blood is saturable, and it can limit leptin entry by creating a blood-brain barrier. This theory is still not fully confirmed as further extensive experimental studies are required to establish the same.

9. Cellular and circulating molecules can inhibit leptin to cause resistance. Extracellular circulating factors may bind leptin, altering its bioavailability and bioactivity.

Video On What Causes Leptin Resistance By Stephan Guyenet, Ph.D

The direct impact of leptin resistance is chronic obesity.

No matter how hard you try and what weight loss supplement you use; it will become almost impossible to lose weight on a lasting basis.

If you already have insatiable recurring hunger pangs, it is a symptom that leptin resistance has set in your body.

Here are some of the typical symptoms and results that will begin to disturb you because of this leptin hormone disorder:-

As obesity issues become chronic with leptin resistance; a hoard of related diseases begins to set in as well.

Any of the cardio-metabolic health risks existing in an obese person can be identified by just assessing the levels of leptin hormone present in the blood.

Leptin disorder is also an indicator of insulin resistance and metabolic disorders a person is facing or could face.

As leptin resistance increases the steady weight gain; it is an ideal condition for cell level inflammation that gives rise to arthritis and diabetes, and even certain cancers develop in some cases.

Another direct effect of leptin resistance is infertility that can occur in a woman. This hormone disorder makes a person get physically aged faster and in some cases, the weight gain is irreversible with any treatment.

Diet Plan To Fix It

As we have already seen above, leptin resistance is a severe health hazard that needs to be tackled in all earnestness.

There are a few prescription pills available for overcoming this hormone disorder and restoring the normal functioning of leptin.

Most of the currently available treatments are aimed at combating the effects of this condition than getting rid of it.

Extensive research and studies are still going on to develop an effective medical solution to reverse this hormone disorder completely and restore normalcy.

A key to preventing (or reversing) leptin resistance is reducing diet-induced inflammation.

Sufficient physical exercise turns on your genes and facilitates healthy leptin function and metabolism. Besides adjusting your diet, it is important to have at least 40 minutes of active physical exercise every day.

One of the practical solutions to counter this disorder is to follow a good diet plan that will weaken the effects of leptin disorder.

Make sure each of your meals contains no more than 500 calories.

As you eat a healthy and satisfying meal, keep a tab of the contents and calories in it. Approximately you could bifurcate the contents of your every meal into 40% fat, 30% carbohydrates, and 30% protein.

As for the nutritional and vitamin requirements of the body, it is important to maintain verities food options open… Different days….different meals.

Drink about eight glasses of water daily… the best thing is to have a glass of water every hour.

The food craving is tackled better with fiber and protein-rich food.

The easiest way to overcome obesity issues is just having simple homemade food, sufficient exercise, good sleep, etc….. it is easy to follow these diets with a little bit of consistent conscious effort.

Just ignore all those packaged foods and soft drinks that are readily available in the shopping centers and restaurants.

Always try to get and eat fresh organic foods that have high energy and good nutritional value.

Lastly, don’t live to eat, but eat to live.

As regards the leptin resistance reversal you may also try any good prescription supplement that you can get.

There are also a lot of leptin diet supplements available online for purchase. Make a bit of research and decide for yourself if you ever need it. However, supplements are not a long-term option.