Many are concerned about whether Acetaminophen (Tylenol) possesses anticoagulant effects or not.

Tylenol, like nonsteroidal anti-inflammatory drugs (NSAIDs), is an over-the-counter medicine that is used to reduce pain, fever, flu, or cold.

Acetaminophen is known as a non-aspirin pain reliever. It is not an NSAID as it does not relieve inflammation.

Acetaminophen-based drugs are not blood thinners. However, some patients might experience a blood-thinning effect, especially when it is used along with other prescription medicines or NSAIDs.

There are prescription medicines used as blood thinners that help blood flow smoothly through arteries and veins.

Blood thinners help to save lives by preventing thick blood clots in the arteries that may otherwise cause cardiac arrest.

The most commonly used blood thinners are anticoagulants such as warfarin, heparin, or Coumadin. They produce chemical reactions in the body to delay the clotting of blood.

Depending on the dosage, antiplatelet drugs like aspirin can prevent the platelets in the blood from clumping together to form a clot.

In this article, we focus on the question; does Tylenol thin your blood?

CONTENT
What Is Tylenol?
Ingredients In Tylenol
Is Tylenol A Blood Thinner?
Tylenol Side Effects
Frequently Asked Questions – FAQs

Tylenol is a popularly used prescription or over-the-counter medication for fever and pain relief.

This OTC pain reliever does not cause stomach problems like the other pain reliever or anti-inflammatory medicines. It is safe even for children and pregnant women.

Acetaminophen is a highly recommended medicine for arthritis pain relief as this has fewer side effects than the NSAIDs like Aspirin, Aleve Ibuprofen, Advil, or Motrin.

In fact, OTC brands of acetaminophen such as Tylenol, Paracetamol, and Panadol are the largest used painkiller pills in the world.

This medicine was first introduced in 1955 by McNeil Consumer Healthcare, a Johnson & Johnson subsidiary, as a prescription drug for children under the name Tylenol Elixir.

In 1959, the FDA approved the OTC sale of Elixir, and it was followed by the introduction of the adult version of it.

The name “Tylenol” and the generic name “acetaminophen” were coined by McNeil from the chemical name of the drug.

You can also find several of its substitute brands with the same formulation.

The active ingredient in Tylenol is acetaminophen or paracetamol.

The brand name Tylenol is coined from the chemical name for the compound, N-aceTYL-para-aminophENOL (APAP).

The compound formula of Tylenol is C8H9NO2.

There are several formulations of Acetaminophen for treating pain, fever, and inflammation.

Tylenol PM contains called diphenhydramine which can help you sleep by causing drowsiness.

Some of the popular formations are Midol, Dristan, and Ultracet.

Since there are many formulations of acetaminophen chances of mismatch and accidental overdose are likely.

Is Tylenol A Blood Thinner? 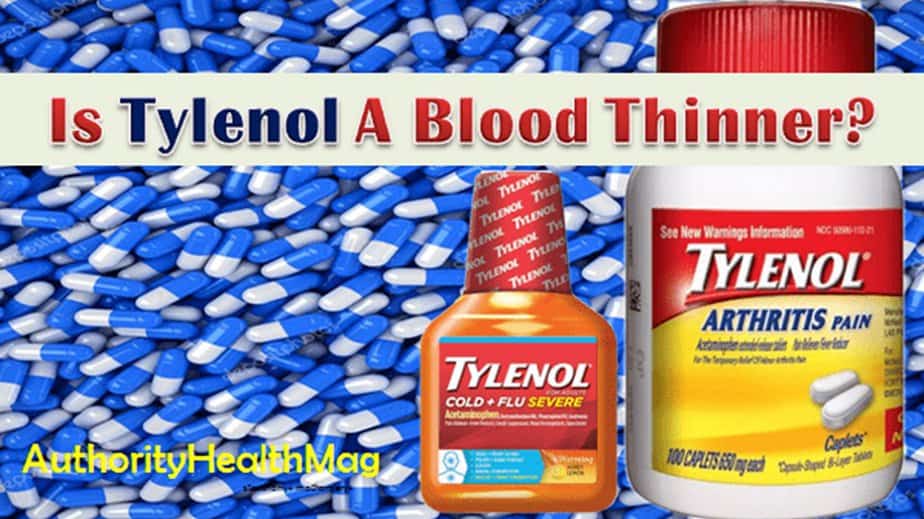 In health forums and blogs, you often come across the question, “Is Tylenol a blood thinner?

No, Tylenol or Acetaminophen is not classified in blood thinner groups of drugs.

Tylenol does not thin the blood, still, it may cross interact with other blood thinning factors to form complex substances.  This may marginally affect the functioning of tissues including blood.

As most pain relievers contain blood thinning agents that may slightly increase the risk of bleeding.

It is important to disclose to your dentist and physician the various drugs that you are consuming to avoid the risk of excess bleeding after extracting a tooth or an operation.

Tylenol does thin your blood to some extent under certain conditions.

Some physicians think that the analgesic properties of Acetaminophen may produce a mild blood-thinning effect. But this is a negligible effect compared to regular blood thinners like Warfarin.

In some treatments doctors may prescribe the simultaneous use of Warfarin and Tylenol; it is safe and effective most of the time.

If you are taking high doses of acetaminophen over a prolonged period, caution is recommended in taking anticoagulant pills like heparin or Warfarin at the same time.

The maximum amount of acetaminophen an adult can take per dose is 1,000 milligrams (mg)

If you are regularly taking acetaminophen, then do not start taking warfarin without the consent of your doctor.

You should seek quick medical assistance if you experience side effects like dizziness, weakness, nosebleeds, bruising, or bleeding gums after taking Warfarin and Tylenol at the same time.

Tylenol may produce side effects in some individuals due to their particular health conditions of the individual.

Some people may develop allergic reactions from this pill which if not treated in time can develop into severe health issues. Its interaction with other drugs may thin blood.

Patients who are already under other medication may face cross interaction between Tylenol and the other medicine.

Acute liver failure can occur after one very large dose of acetaminophen.

Side effects of Tylenol are usually associated with overdosage of the pill taken by the patient.

An overdose of Acetaminophen can result in side effects such as:

The patient must seek immediate medical intervention in case of any severe symptoms or side effects.

Stop taking Tylenol if you experience any physical discomfort. Also, do not take it if you’re taking a blood thinner.

According to the official report of the manufacturer of Tylenol, the active ingredient contained in this medicine is Acetaminophen only.

The company also claims that Tylenol does not contain aspirin, ibuprofen, or naproxen, active ingredients found in other nonprescription pain relievers.

Tylenol relieves pain differently from other nonprescription pain relievers like aspirin and ibuprofen.

How much Tylenol can you take?

The recommended dosage of Acetaminophen for adults per day is not more than 4g.

For children, not more than 90mg of Acetaminophen per kg of body weight per day.

Overdose of acetaminophen can cause serious side effects that can damage organs and imbalance the functions of the body.

Normally, Acetaminophen is a safe and effective pain reliever. However, it should be used according to its provisions and requirements. Always follow the recommendations of your physician regarding the dosage and frequency.

Can Tylenol be used during pregnancy?

According to FDA classification protocols, Tylenol comes under the Pregnancy category, B group drugs. This implies that Acetaminophen is safe for a pregnant woman.

However, regular intake of this pill for a prolonged period is not recommended. A pregnant woman should ensure that the dosage should not exceed the prescribed limit.

Pregnant women who are taking other prescription medicines should not take this OTC pill without a recommendation from the doctor.

Is it safe to take ibuprofen (Advil) with acetaminophen?

Yes, it’s safe to take acetaminophen and ibuprofen together for extra pain relief, such as for a dental extraction. Taking them together has higher effectiveness in relieving pain than taking either of them separately. This is safe because both these painkillers work differently with few side effects. Talk to your doctor before using them.

Tylenol is not a blood thinner like anticoagulant prescription medicines. It’s an excellent pain reliever and fever reducer.

In rare cases, it may cross interact with other blood thinners and NSAIDs which can result in the formation of big lumps of blood clots in the artery and veins.

Patients who have been taking Tylenol for a long period should exercise caution while taking anticoagulant medicines. Do not take blood thinners that prevent blood clots along with this drug.