Many are genuinely concerned about the blood-thinning effects of this popular painkiller drug.

Blood thinners decrease the chances of blood getting clotted.

There are several prescription medicines available for blood thinning. If you have an abnormal heart rhythm, your doctor might prescribe one such medication for you.

However, some of the most commonly used medicines, especially long-term use of pain relievers and anti-inflammatory medicines, can have blood-thinning effects as a side effect.

The interaction of different medications could also make your blood low in density or slow down the clotting of blood.

This article focuses on “Does ibuprofen thin your blood?”

What are blood thinners?

Blood thinners are anticoagulant substances that slow down the normal process of blood clot formation.

There are prescription medications that are taken orally or by injection to prevent the clotting of blood.

Doctors may recommend such medicines for patients who suffer from some kind of heart or blood vessel disease or for those who have poor blood flow to the brain. They are useful in preventing a heart attack or stroke by removing the clotting of blood in the arteries and veins.

In the majority of healthy people with a healthy cardiovascular system, regular use of such medicines can put them at risk of bleeding and stomach ulcers.

There are two types: antiplatelets, which prevent the platelets from developing into a clot, and anticoagulants, which slow down the actual formation of a blood clot.

Ibuprofen is an anti-inflammatory medication. It is a common over-the-counter (OTC) drug used for pain relief. In addition to pain management, they are also commonly used to reduce fevers and inflammation.

Ibuprofen has the most favorable GI safety profile of products called nonsteroidal anti-inflammatory drugs (NSAIDs) that block COX enzymes in the body and prevents the formation of substances called prostaglandins. They are used to reduce the hormones that cause inflammation in the body.

Ibuprofen is not a blood thinner. It’s a pain reliever that works well for pain from osteoarthritis toothaches, joint pain, fever, menstrual cramps, and backaches.

According to the Mayo Clinic report, it helps reduce symptoms of inflammation like arthritis (osteoarthritis, rheumatoid arthritis, or juvenile arthritis), such as inflammation, swelling, stiffness, and joint pain. It’s meant for use only till those symptoms subside.

It is available in the following dosage forms:

Is Ibuprofen a Blood Thinner?

Many anti-inflammatory and pain relief drugs like ibuprofen, used at the lowest dose, can still have a blood-thinning effect to varying degrees. However, ibuprofen thins the blood slightly, but not like prescription blood diluters like heparin or warfarin.

Ibuprofen slows down the normal blood clotting rate of the blood to some extent. It may increase the bleeding time without altering the viscosity of the blood.

When you are taking this medication, if you get a cut on your skin, it may take a longer time for the bleeding to stop.

According to the FDA report, patients receiving Ibuprofen tablets may be adversely affected by alterations in platelet function. While having this medication, patients with coagulation disorders or taking a blood thinner should be carefully monitored.

Some of the drug reviews suggest that Ibuprofen produces a blood-thinning effect by interfering with the functions of thrombocytes and interrupting the normal clotting rate of the blood.

This pain reliever medicine may cause similar effects to any of the medicines for reducing the blood’s viscosity. Talk to your doctor before you start taking anti-inflammatory drugs.

It’s best to use the lowest dose that reduces symptoms. You should stop taking them if the symptoms subside. 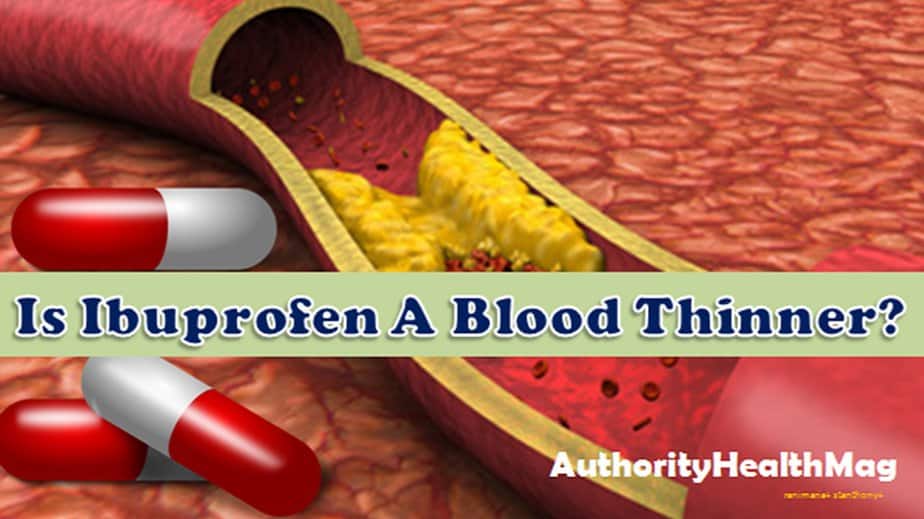 All Advil brands like Brufen, Midol, Motrin, and Nurofen can thin the blood to some extent. They increase the bleeding by decreasing the potency of the thrombocytes in the clotting of the blood.

Two types of anticoagulant medications are:

Antiplatelet drugs prevent the clumping of platelets and thus decrease the blood clotting power of thrombocytes.

Anticoagulant medication is specifically meant for blood thinning and preventing blood clotting for several hours. They open up the blood vessels and increase the flow of blood.

Anticoagulant medications may have some side effects on health in the long run.

Some of the natural remedies are worth trying if you have cardiovascular disease resulting from blood clotting or closed blood vessels.

Try to do a minimum of 30 minutes of vigorous exercise daily. Exercises help to lower the Vitamin K levels in the blood and make the blood slightly thinner.

Eat foods rich in vitamin E like red bell peppers, Swiss chard, spinach, kale, and almonds. Vitamin E is a fantastic antioxidant that reduces inflammation and clotting of the blood in the vessels.

Antibiotics have a blood-thinning effect when they are regularly consumed for a month or more. Some of the common foods like garlic, onions, olive oil, and jicama contain natural antibiotics that produce thin blood.

Keep your body well hydrated by drinking enough water every day; this helps to open up the blood vessels and produce low-density blood.

Vitamin D acquired from the sunshine can increase blood circulation and make the blood slightly thinner. Expose yourself to the morning sun for a couple of minutes to prevent Vitamin D deficiency in your body.

Eating foods such as strawberries, cayenne pepper, honey, cinnamon, oranges, prunes, vinegar, and red wine can supply your body with salicylate chemicals. It helps suppress the blood clotting power of Vitamin K and makes the blood somewhat thinner. Aspirin is one of the most commonly used salicylates (18).

Side Effects of Blood Thinners

Regular consumption of medicines that reduce the density of blood can cause dangerous side effects in most patients.

The risk of bleeding is one of the major consequences of blood thinning medicines and NSAIDs.

Some of the most commonly found side effects of such medicines are:

Is it alright to take ibuprofen while taking blood thinners?

You should not take ibuprofen and other blood-thinning medications simultaneously.

Nonsteroidal anti-inflammatory drugs (NSAIDs) may impair the function of platelets, which is essential for blood clotting.

Medications like Warfarin, Enoxaparin, and others used as blood thinners impair blood clotting differently, by impacting the INR level.

There is no direct overlap between NSAIDs and specific anticoagulant medications. However, by taking these two medicines at the same time, you are impairing the body’s ability to do blood clotting in two separate ways. The bleeding risk is higher with them.

Taking NSAIDs and other anti-coagulant medications increases the chance of bleeding profusely to the extent of fatal consequences.

Never take painkillers and blood thinners simultaneously without the recommendation of your physician.

If interactions between your blood thinner and ibuprofen are leading to adverse effects, then you have to look at different options for pain relief.

Is it safe for you to use ibuprofen?

Yes, it is safe to consume ibuprofen for a short period at the lowest dose possible.

However, the daily consumption of these painkillers and NSAIDs isn’t recommended. Blood thinners raise the risk of bleeding and heart failure.

You should diligently follow the advice of your physician when using any anti-inflammatory medicine.

Never take an overdose of NSAIDs beyond the daily dosage recommended by your doctor.

Advil, Midol, Motrin, and Nurofen are excellent for curing moderate pain. They do not pose any serious health risks.

However, patients already on prolonged medications should not consume NSAIDs without consulting their doctor. Also, stop taking them if the symptoms subside.

You need to stop taking NSAIDs immediately and refer to a doctor if you notice symptoms such as:

Who should not take ibuprofen or Advil?

Ibuprofen may thin the blood and increase bleeding time depending on the health condition of the patient. Consult your doctor before taking ibuprofen with blood viscosity-reducing medicines.

Advil should not be taken daily for an extended period, as it will definitely harm you.

Ibuprofen is not meant for patients with the following health conditions and medication history:

What is the recommended ibuprofen dosage per day?

Ibuprofen per dose should not exceed 800 milligrams; 400 mg per dose is best.

The physician recommends the dosage depending on the severity of the inflammatory condition. For example, patients with rheumatoid arthritis may require higher doses than those with osteoarthritis.

A healthy adult may consume up to 3200 milligrams per day; 800 mg dose pills are taken four times a day.

Ideally, a daily intake of ibuprofen can range from 1200 to 3200 mg orally per day, divided into equal doses.

Doctors usually recommend taking pain relievers like ibuprofen at the lowest dose for the shortest time possible until your symptoms subside. If you’re unsure of the correct dosage, consult with your doctor.

This medicine should not be consumed by babies, pregnant women, or breastfeeding mothers.

An overdose of Advil and Motrin has severe side effects, such as:

Can I use nonsteroidal anti-inflammatory drugs to prevent blood clotting?

No, even though NSAIDs like ibuprofen will slightly thin your blood, you shouldn’t take them to prevent clotting. For this purpose, always use the prescription medicines like warfarin, Eliquis, Xarelto, or clopidogrel (Plavix).

Aspirin is an antiplatelet drug that stops platelets from clumping together to form blood clots. Ibuprofen is milder than aspirin, which significantly thins the blood. The former may slightly delay the clotting time but does not change the normal thickness of the blood as the latter does. Also, the side effects of aspirin involve a higher risk of bleeding, nausea, vomiting, stomach pain, and heartburn.

Ibuprofen makes the blood thin, but it is not an anticoagulant medication like warfarin or others that blocks the coagulation proteins in the blood.

Advil does not prevent venous thrombosis. It is an anti-aggregation drug that has a significant impact on increased bleeding by slowing down blood clotting.

Ibuprofen is a painkiller and an anti-inflammatory drug that works by inhibiting an enzyme called cyclooxygenase. This particular enzyme creates some of the mediators that cause pain and inflammation.

Ibuprofen also inhibits a similar enzyme that supports the platelets in aggregating and clotting the blood.

Taking a high dosage of these medicines may increase the risk of arterial thrombosis, which leads to the prevention of blood clotting.

Most painkillers in this category have identical effects. Antiplatelet drugs like aspirin also have a blood-thinning effect that lasts for several days. But paracetamol (acetaminophen in the US) does not impair the function of platelets.

Is Tylenol A Blood Thinner?