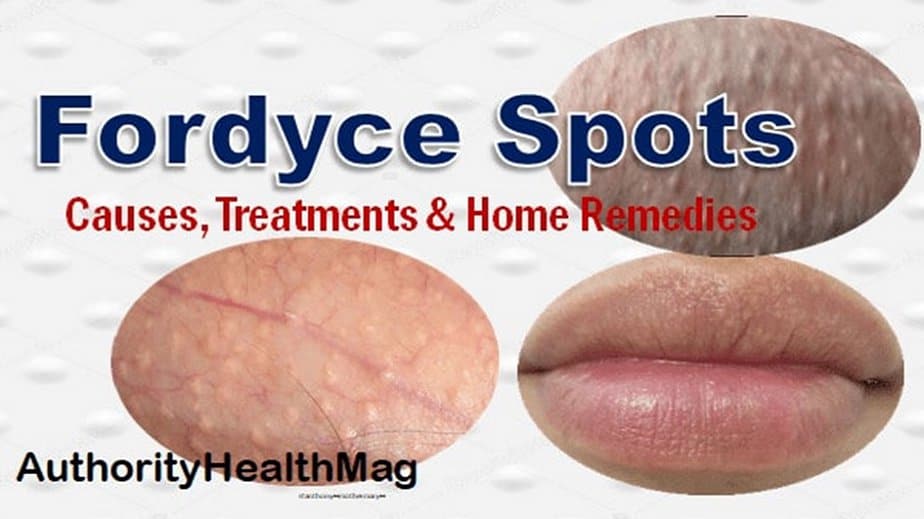 Fordyce spots on the lips and genital area.

Although it is harmless, hardly anyone can accept the ugliness it brings to the delicate parts of the body.

Having pimple-like white bumps and spots in your genital area, on the vermilion border of your lips, in your mouth, or on your eyelids can make you feel miserable.

Fordyce spots are harmless and non-communicable skin conditions. Yet, you surely want to explore the best home remedies and treatments for Fordyce spot removal.

If you are wondering how to remove Fordyce spots, keep reading this article to find the right solution.

What are Fordyce Spots?

Dr. John Addison Fordyce was a U.S. dermatologist, 1858–1925, whose name is associated with Fordyce’s spot.

Fordyce spots are small, raised, pale red or white bumps that may appear on the scrotum and shaft of the penis, labia of female genitalia, the edge of your lips, inside your mouth, and on your eyelids.

These spots or bumps are also known as “penis pimples” or “sebaceous prominence.”

These white spots or bumps are enlarged sebaceous oil glands that secrete sebum oil to keep the skin and hair moisturized.

This problem is commonly seen in men but less common in women.

Sebaceous prominence is neither contagious nor a sexually transmitted disease.

These tiny white bumps or spots are harmless as they do not cause pain or skin irritation.

No treatment is required for this condition.

However, getting rid of the Fordyce spots is important for cosmetic reasons and to boost your self-esteem.

How to Diagnose Fordyce Spots?

You could be confused and find it difficult to identify and differentiate sebaceous prominence from other skin issues.

There are other skin conditions such as milium cysts, sebaceous hyperplasia, herpes, epidermoid cysts, genital warts, or basal cell carcinoma that have a similar appearance to it.

Sebaceous prominence appears on the epidermis layer of the skin.

It is not growing around a hair follicle, unlike whiteheads and blackheads.

Fordyce spots may appear isolated or scattered, but sometimes they form a cluster together.

They aren’t itchy, painful, or contagious.

They are not easily noticeable unless the skin is forcefully stretched.

In rare cases, Fordyce spots on the scrotum or shaft of the penis may have visible bumps; in rare cases, they might even bleed during intercourse.

Usually, they appear domed and smooth with reddish, white, or skin-colored in the genital area.

If you have them in the genitals, examine them thoroughly to ensure they are not genital warts or any type of STD.

They are unsightly white spots or granules that can appear on the lips or in the mouths of both men and women.

They are very tiny bumps, around 1–2 mm in diameter.

They appear as yellow-white spots in the oral area, along the vermilion edges of the lips, and around the mouth.

Your doctor can easily diagnose it by its appearance alone. If needed, your doctor might even perform a biopsy test to make sure of the skin issue.

Fordyce spots are a natural part of your anatomy, and they occur naturally at birth. Hormonal changes can also cause Fordyce spots.

However, for most people, the spots remain hidden and invisible.

They are enlarged sebaceous glands that commonly appear on the skin surface for the first time around puberty.

Available evidence from studies suggests that the occurrence of sebaceous prominence increases with age.

Some of the recent studies have brought out a few important findings about Fordyce spots.

A study published in the dermatology section of the Dental Research Journal suggests that an excess number of Fordyce Spots in the mouth is closely linked to hyperlipidemia. It is a condition that causes heart disease because of elevated levels of fat in the blood.

According to one of the studies published in the journal, Gut found that 86.7 percent of patients with an inherited form of colorectal cancer had this issue in their mouth. The findings of this study suggest the possibility of identifying families at high risk of getting colorectal cancer by analyzing the presence of Fordyce spots in them.

Another research finding by scientists in the Journal Clinical Case Reports and Reviews verifies that the chances of getting Fordyce Spots are two times higher in men compared to women. Men with oily skin are highly prone to getting sebaceous prominence.

Do Treatments For Fordyce Spot Work?

Honestly, sebaceous prominence is a harmless condition of the skin that does not require any treatment.

However, if you are adamant about the treatment of Fordyce Spots for cosmetic reasons, then treatments are available for them.

Do Fordyce spots go away?

Yes. With or without treatment, these non-contagious spots tend to fade away over time.

If you are seriously concerned about how to remove Fordyce Spots, here are a few mainstream treatments that can help you out.

None of the treatments can give a permanent solution to sebaceous prominence.

Results from the treatments may last for a few months, but soon fresh spots come up again.

Only a substantial decrease in the growth of sebaceous glands can make these spots go away.

Changes in the levels of hormones and food habits can have some impact on the disappearance of these spots.

Don’t pick or squeeze the spots. This won’t make them go away, and it can cause infections to develop.

Nobody likes to have ugly bumps and pimples on their lips, around their mouth, or on their genitals.

For the sake of good appearance and psychological satisfaction, it may be vital for you to remove the spots.

You also do not want your friends and partners to view the sebaceous prominence and falsely imagine that you are suffering from some form of STD.

Let us now look at some of the best solutions and remedies for getting rid of Fordyce Spots.

Take the help of a Dermatologist

If you notice an unusual growth of little white bumps on your genitals, on lips, or inside the mouth, consult a dermatologist.

Dermatologists can easily identify your skin condition and say whether you suffer from granules, genital warts, or herpes.

The dermatologist can also suggest the best treatments for the removal of it depending on your skin anomaly.

Micro-punch surgery is an effective method for rapidly removing multiple spots and granules from your genital area and lips.

This surgery is popularly used in hair transplantation.

It is a painless procedure as doctors usually apply local anesthetics to reduce pain.

In this surgical method, the surgeon makes use of a small pen-like device to punch your skin and remove the tissues with spots and bumps.

It is a safe treatment method as this process does not cause infection or leave scar marks.

According to a study published in the Journal of Plastic, Reconstructive & Aesthetic Surgery, the participants who underwent Micro-punch surgery showed no signs of Fordyce spots even after a year of the treatment.

This surgery is superior to laser treatment as this method carefully shrinks or removes the tissues with spots instead of locally destroying them.

The treatment procedure is very fast and can remove dozens of Fordyce spots within a couple of minutes.

Your dermatologist may use carbon dioxide laser treatments to get rid of Fordyce spots.

The use of CO2 laser-aided therapy is the most common method for correcting Fordyce spots and bumps on the skin.

However, using pulsed dye lasers is less scarring than using CO2 lasers, but it is a costly affair.

Using a laser solution for removing spots on the lips and face is not recommended as this may leave scar marks on the skin.

Your doctor may recommend you use any effective topical treatments to get rid of sebaceous prominence.

According to some research reports, the Fordyce spots can be triggered by pregnancy, menopause, or puberty, which is responsible for acne as well.

For this reason, some of the prescription creams used for acne like clindamycin, pimecrolimus, glucocorticoids, retinoids, or benzoyl peroxide might also work for it. Use those creams and OTC products only if recommended by your dermatologist.

Clindamycin cream is proved to be beneficial for dealing with inflamed sebaceous glands.

These topical treatments can also be used along with laser treatments.

Photodynamic therapy (PDT) is a medical treatment that utilizes a photosensitizing molecule.

When photosensitizers are exposed to a specific wavelength of light, they give out a form of oxygen that kills the skin cells.

PDT is also used for activating certain drugs like 5-aminolevulinic acid, which need to be activated by light exposure.

It is usually employed in treating certain types of skin cancer and aberrations.

PDT treatment can be used to reduce the appearance of spots in the genital area.

However, this treatment may not be suitable for the face and lips as PDT can make the skin temporarily sensitive to the sun’s rays. It may also leave scars on the skin.

Electrodesiccation is a kind of laser therapy that can be used for burning off the Fordyce spots.

Overuse of cauterization laser treatment can leave scars on the skin and cause skin irritation as well.

If your dermatologist recommends it, this is effective for Fordyce spots removal from the genital area.

It is not apt for use on the face and lips for the correction of spots.

Cryotherapy is a commonly used treatment for curing a variety of benign and malignant tissue damage, medically called lesions.

Cryotherapy can be applied to freeze off the bumps using liquid nitrogen.

You can verify the suitability of this treatment for sebaceous prominence with your dermatologist.

Evidence suggests that the use of isotretinoin is also effective for the removal of Fordyce spots. You have to use it for several months to get lasting results.

Overuse of isotretinoin can cause some side effects such as birth defects, joint pain, back pain, and cracking or peeling skin.

Women planning to have a baby or who are already pregnant should not use isotretinoin for treating acne and Fordyce.

Some of the home remedies that you use for acne and scar removal are also useful for treating Fordyce spots.

It is important to use natural remedies regularly and for a long period to achieve satisfactory results with the treatments.

Please note that natural remedies do not have any scientific backing to prove their efficacy in getting rid of Fordyce granules. Home remedies don’t need to work for everyone.

Here are a few natural remedies you can try at home:

Garlic: Apply the garlic paste and leave it overnight.

Turmeric: Apply fresh turmeric paste to the affected area and wash it off after an hour.

Apple Cider Vinegar: Dab diluted ACV with a cotton swab and cleanse it off after an hour.

Honey: apply a mixture of organic honey and olive oil to the spots.

Aloe Vera Gel: Slather the Aloe Vera gel on the spots and wash them off after a few hours.

Chamomile: Apply the paste made of chamomile flower powder to the Fordyce granules.

Jojoba Oil: Use a mixture of Jojoba oil and Argan Oil for massaging the area with Fordyce spots.

Fordyce spot is not a serious or contagious disease.

It does not require any treatment.

Please note that approximately 80% of adults develop Fordyce spots at some point in their life.

Usually, they are hidden and not visible unless the skin is forcefully stretched.

If you have a clearly visible sebaceous bump on your lips, face, or genitals, you may want to get rid of it for the sake of a beautiful appearance.

It is possible to remove the white spots and pimples on the genitals and lips with any of the treatment methods we have discussed above.

However, no treatment can prevent the future occurrence of sebaceous prominence.

I hope this article has cleared your doubts about “how to remove Fordyce spots.”

How to get rid of sebaceous prominence?

How do you get rid of a blind pimple fast?

Do lip pimples go away?

What gets rid of pimples overnight?