It is effective for relieving stress and anxiety. However, Valium addiction symptoms will eventually emerge if a person is abusing this benzodiazepine drug.

If you are a user of this drug, it is good to learn how long does Valium stays in your system.’

TABLE OF CONTENTS
Valium: An Overview
How Long Does Valium Stay In Your System?
Factors Influencing the Retention Valium In Your Body
How To Remove The Traces Of Valium Out Of Your System?
The Bottom Line

Diazepam, first marketed as Valium, is a medicine of the benzodiazepine family that typically produces a calming effect.

Diazepam belongs to a class of drugs known as benzodiazepines which have several benefits in dealing with various health conditions.

Diazepam systemic is used in the treatment of:

How to Use Valium?

Diazepam in oral form can be taken with or without food.

The dosage of Valium for each patient is based on your medical condition, age, and response to treatment.

A typical dose of Valium prescribed for an adult to treat anxiety, seizure, muscle spasm or alcohol withdrawal may range from 2 to 10 mg 2 to 4 times a day.

Capsule: Swallow the extended-release capsule whole without breaking or crushing it.

Tablet: Valium tablet comes in 2-, 5-, and 10-milligram (mg) pills. Swallow the tablet with water in the right dosage recommended by your doctor.

Valium Liquid: With the help of a medicine dropper take the prescribed dose of medicine and mix it with liquid or soft foods. You should take the entire mixture right away without storing it for later use.

Valium Injection: This medicine is to be injected deep into the muscle or into a vein as directed by your doctor. The injection should be done very slowly into a large vein.  This medication is available in an ampule, pre-filled syringe, vial, or pre-filled syringe with an autoinjector.

Possible Side Effects Of Diazepam

Most patients who use this medicine in the prescribed doses during the treatment period do not experience any side effects.

However a few may experience Valium adverse effects on health because of their particular health conditions.

Some of the possible Valium side effects are:

A few users of this medication might experience mental/mood swings such as hallucinations, depression, confusion, memory problems, or irritation.

Some may experience trouble in speaking, unsteady walking, muscle weakness, yellow eyes, or difficulty in urinating.

If you are allergic to any of the ingredients in Diazepam systemic medication, you develop symptoms like rash, itching/swelling (especially of the face/tongue/throat), severe dizziness, or breathing trouble.

If Diazepam is taken for a prolonged period, this may cause addiction. The risk of addiction is higher if you have had substance abuse like drugs, weeds, or alcohol in the past.

Long-term usage of benzos like Valium can cause memory impairment for some.

How Long Does Valium Stay In Your System?

Diazepam systemic is a very effective sedative medication that has several uses.

However, continuous use of Valium can become addictive and compulsive. Do not use benzodiazepines beyond the period recommended by your physician.

At Valium’s peak in 1978, 2.3 billion tablets were sold in a single year.  However, it was found that Diazepam also has high addiction potential. An overdose of this medication can be life-threatening or exhibit withdrawal symptoms like drug abuse.

Patients who are concerned about the side effects of this medication are worried about ‘how long does Valium stay in the system’ (including blood, urine, and saliva).

Authorities certifying medicines in most of the countries have classified Valium as a Schedule IV controlled substance under the Convention of Psychotropic Substances.

Usually, doctors do not prescribe this medication more than twice or thrice to a patient. However, recreational abuse of Valium continues to exist.

Residues of ingredients in Valium stay in the body for a considerable time in comparison to many other prescription medicines.  The elimination half-life of this medication can take up to 30-56 hours depending on various factors about the individual user.

On average, it can take up to 10 days for this drug to entirely leave the system.  However, Valium metabolized by the liver may be retained in the body for a much longer time. 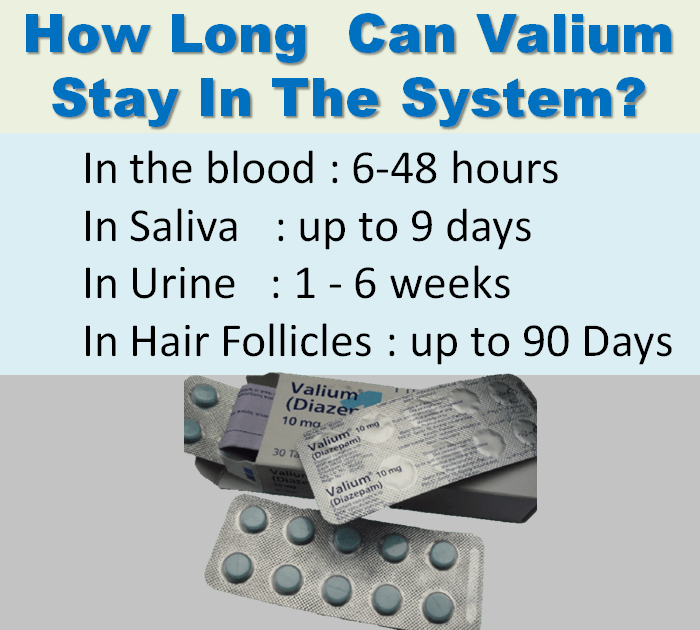 After the last intake of Valium, a saliva test can detect the drug or its metabolites for 7 to 9 days.

However, the presence of Valium in the saliva is found for up to 9 days only when the patient has used this drug in high doses or using the drug frequently for a considerable length of time.

As per the medical standards, the saliva test is generally considered to be less reliable.  A saliva test is done only when high-quality laboratory detection methods are available.

A blood test can easily detect the presence of Valium in the body especially if the patient is a long-term user of this drug.  Valium can be detected in blood between 6-48 hours after the drug was last used.

The result of the blood test can vary depending on the patient’s health features and duration of using this drug.

If you are wondering how long does valium stay in your system,’ Urine test is an excellent method to detect Valium metabolites in your body. This test can detect Diazepam metabolites even after a few weeks after you had your last dose of the drug.

A urine test can indicate the level of Valium residues present in your system longer than the blood test.

Of course, the outcome of a drug test using urine can vary according to the user’s metabolism rate and the dosage and duration of the drug used.

On average, a urine test can indicate the presence of Valium in your system between 1 to 6 weeks after you last had the drug.

Hair follicle tests can detect the built-up Valium for up to 90 days.

However, the hair test does not represent the number of drugs present in the body. It only indicates the drug residues deposited in hair follicles over a period, and thus it is not a reliable method.

Drug testing through hair tests is a more expensive and difficult procedure.

Factors Influencing the Retention Valium In Your Body

There are a few factors that determine the duration of Valium metabolite retention in your body. How long a drug stays in the body is influenced by health factors of the patient such as:

Other factors that influence drugs retention in the body are:

While you are trying to estimate how long diazepam will linger in your system after your last dose, it is important to consider the hepatic (liver) function in the body. Poor functioning of the liver can take a longer time for dispelling a drug from the body.

According to research, in a person suffering from liver cirrhosis, the half-life of diazepam can be up to 164 hours. In such a condition, it can take approximately 38 days to completely excrete the diazepam. 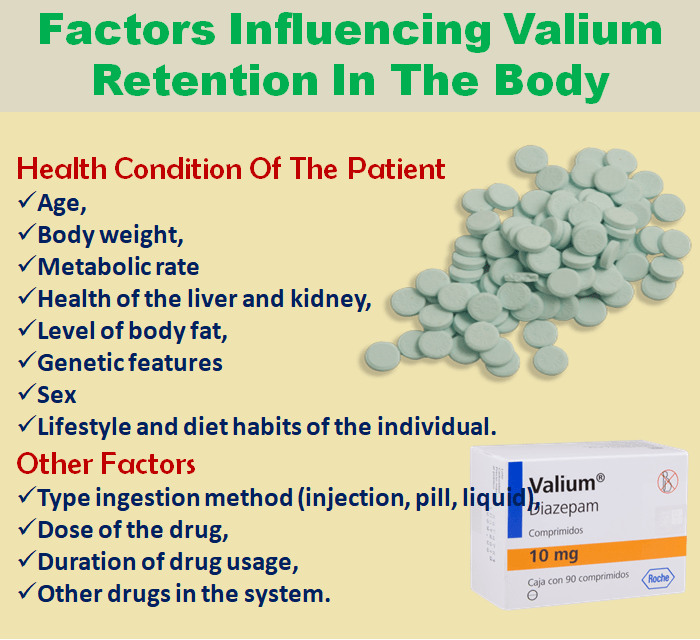 How To Remove The Traces Of Valium Out Of Your System?

As we have already seen how long valium stays in your system’, let us see how to get rid of Valium metabolites from your system.

Patients who have discontinued Valium would like to eliminate the residue of this drug quickly from the plasma.

There are several ways you can remove or reduce the lingering effect of a drug after you have discontinued using them. However, you should clarify the safety and efficacy of methods used for eliminating the remainder of Valium in your system.

Here are some of the methods for eliminating Valium from your system:

You can stop further accumulation of Valium in your system by stopping the use of the drug. You should not stop the intake of a drug abruptly. You can gradually reduce the dose and frequency of taking the drug until you reach a condition that allows you to completely quit using the drug without the withdrawal symptoms.

One of the best ways to eliminate toxic contents and drugs from your body is to drink a lot of water or fluid daily.

A drug is mostly metabolized by the liver and expelled out of the body by kidneys.

A well-hydrated body has a higher urinary flow which is useful for renal excretion of drugs and toxic substances from the system.

According to a recent research report, Diazepam-like drugs get accumulated at a very slow rate in obese people. Similarly, the elimination of Diazepam from the system also happens at a slow rate in fat people.

Burning body fat via exercise and a controlled diet can help boost the faster elimination of drug residues from the system.

Using supplements that enhance hepatic and renal function can boost the faster excretion of diazepam metabolites from the body.

Some of the supplements contain hormonal substances that act as CYP3A4/CYP2C19 inducers for expediting the metabolism and excretion of drugs from the body.

For example, activated charcoal is beneficial for flushing out remnants of Valium and its metabolites from the system.

‘How long does Valium stay in your system’ depends on several factors.

If you have been taking Valium for the long term, the accumulation of both diazepam and its metabolites (nordiazepam, temazepam, and oxazepam) stays throughout the body. Thus it can take a longer time to fully eliminate the drug from your system.

Similarly, dosage, frequency, co-ingestion of other drugs, diet and lifestyle habits, obesity, diabetics, the healthiness of liver and kidney are some of the other key factors that determine the retention of Valium in your system.

On average, Valium can stay in your system and be detected in urine for up to 5-9 days after therapeutic use.

According to a study, Diazepam showed lower maximum concentrations and a longer plateau duration in elderly people.

However, if you had a chronic use of Valium consistently for several months, then the traces of this drug can be detected in urine screens for up to 4-6 weeks.

Hair follicles can retain Valium contents up to 90 days after the last use of this drug.

How Long Does Nicotine Stay In Your System?