All of sudden coughing up brown mucus or phlegm may make you feel anxious and worried about your lungs’ health.

Phlegm is a type of mucus that is formed in the chest.  A noticeable amount of phlegm in varying consistency is formed when infection or disease is affecting the lungs, throat, or nose.

The consistency of mucus can range from mucoid (frothy) to mucopurulent to purulent (thick and sticky).  According to the type and severity of the infection, the phlegm may get darker and thicker.

When you are dehydrated or in the morning, the mucus usually becomes thick and dark.

Mucus can change into different colors depending on the type of infection affecting your lungs.

The phlegm may change colors according to infections such as:

Why Are You Coughing Up Brown Mucus Or Phlegm?

Mucus is a slippery liquid made by mucous membranes or mucosas.

Mucus or phlegm is a very important material that has several beneficial functions for health. It helps trap particles such as dirt, minimizes water loss, protects the surface from damage, lubricates, and most importantly destroys bacteria and viruses.

Coughing up phlegm commonly happens when one is suffering from a common cold or flu. It is normal and nothing so alarming about it.

But if you are coughing up thick brown mucus it would mean that you are suffering from infections or disease affecting your lungs.

Usually, brown phlegm (bflem) is not an indication of any serious underlying health conditions. However, you should be vigilant in consulting a physician if the issue persists for more than a day.

Brown phlegm is commonly caused by:

Lung infection caused by bacteria or viruses is the main reason for phlegm changing color to brown. Respiratory infections occur when a bacterium or virus is trapped in your nasal cavity.

Here are some of the common infections that may cause brown mucus discharged while coughing:

Stomach acid or bile flowing back up into your esophagus is a common acid reflux issue faced by many.

GERD is a chronic form of acid reflux that can irritate the lining of your esophagus, causing it to become inflamed. This may also result in the development of mucus in the esophagus.

The phlegm can also become brownish when you regurgitate food especially after you consume coffee, chocolate, or red wine.

Throwing up brown phlegm while coughing can also be the result of heavy smoking.

Smokers accumulate a combination of resins, tar, and nicotine in the lungs and bronchial passages which make the phlegm appear dark brown.

The side effects of smoking also result in chronic bronchitis and emphysema which has brown mucus as one of the symptoms.

A person living or working in a highly polluted environment may change the color of his sputum to dark brown or black.

Industrial laborers and factory workers who have to work in dusty surroundings might end up coughing up brown mucus.

After cleaning an extremely dusty room, you may discharge brown mucus while coughing.

Nasal polyps are painless, noncancerous growths that can lead to a lost sense of smell or infection.

The nose bleeding caused by Nasal polyps may make the patient’s mucus brown or red in color. The dried blood in the sinus gets mixed with the phlegm to change its color to brown. 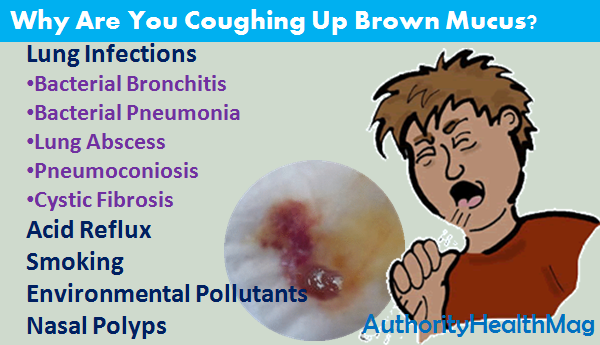 How To Get Rid Of Brown Sputum?

If you are spitting out thick dark brown sputum while coughing, then you must see your doctor for diagnosis and treatment.

Most of the phlegm-causing conditions readily respond to antibiotics or other treatments.

Sputum production resulting from viral infections can be easily remedied by using antibiotics or natural remedies.

Proper rest, sleep, eating, and hydration are also crucial for getting rid of thick mucus discharges.

Here are some ways to get rid of brown phlegm:

As we have already discussed, brown mucus is a result of infections like bronchitis, cystic fibrosis, lung abscess, pneumonia, or pneumoconiosis. It can also be caused by smoking, acid reflex, Nasal polyps, or environmental pollutants.

Natural remedies are viable for the option to deal with brown phlegm caused by infections. Home remedies are the best option for treating brown mucus caused by common infections or diseases. However, it is wise to consult your physician especially if the brown mucus discharge continues for more than a couple of days.

Here are the 7 best home remedies that you may try for managing thick and dark mucus forced out through coughing.

Black and white peppercorns are both the fruit of the pepper plant, but they are processed differently.

Pepper, both white and black, may help you break up and expel thick lung mucus. It works for removing sputum buildup in the throat and nasal passage as well.

Take half a teaspoon of pepper and grind it. Mix the ground pepper with one teaspoon of honey; blend them by warming up.  Directly consume the mixture; repeat this treatment three times a day to loosen the mucus.

According to the University of Maryland Medical Center (umm.edu) ginger has been used for over 2000 years to treat various conditions.

Ginger contains excellent expectorant properties that can give fast relief from chest and throat congestion caused by mucus buildup.

Ginger tea with pepper is a traditionally used home remedy for relieving symptoms associated with coughs, colds, flu, and sinusitis.

Take 100 grams of fresh ginger roots and mush them after peeling. Add two teaspoons of raw honey to the mashed ginger and warm up the mixture in the oven for a minute.

Consume two teaspoons of this ginger and honey mixture three times a day to relieve the brown mucus present in the windpipes.

Warning: Ginger should not be used by people with gallstones, gallbladder disease, diabetes, or heart problems.

The citric acid in lemon tea contains anti-inflammatory and antiseptic properties. When honey (preferably pure and organic forest honey) is added to citric acid, it may help to loosen the brown phlegm.

Lemon tea is also an excellent remedy for soothing a sore throat and runny nose and improves the immunity to fight microbial infections affecting the lungs.

Take a glass of warm water and add 8 drops of lemons juice and 1 teaspoon, raw honey, to it. Stir the tea and drink it gradually. Repeat the intake of lemon tea thrice a day for the best results.

Gargling with warm salt water is a traditional home remedy for loosening mucus and clearing blocked throat and nose. This remedy also relieves the chest congestion and sore throat problems caused by mucus build-up in windpipes and nasal tracks.

Take a glass of warm water and add 1 teaspoon sea salt to it. Gargle for 3-5 minutes at a time and repeat the treatment thrice a day. Do not drink the saltwater while gargling.

Bay leaf is a fantastic natural remedy that works great for drawing out the phlegm build-up in the lungs and throat.

Consuming bay leaves in tea can help ease the symptoms of coughs and colds as they help clear congestion caused by sputum.

Add 5 fresh bay leaves to a cup of boiling water. Let it boil for 3 minutes allowing the medicinal extracts from the leaves to ooze into the water.

Anti-inflammatory properties contained in lemon and garlic are excellent expectorants to loosen the mucus and to make it get expelled while coughing.

Drinking lemon and garlic blended tea is sure to reduce symptoms of cold, flu, and bronchitis.

Take a cup of boiling water and squeeze the juice from a fresh lemon into it; then add two cloves of smashed garlic and one pinch of salt. For better results, you may add half a teaspoon of ground black pepper as well.

After stirring the mixture well, strain out the warm tea into a cup and drink it gradually.

Repeat the treatment thrice a day to get rid of the yellowish-brown sputum.

Wild cherry bark is a natural substance sold in supplement form. This is an extract obtained from the bark of the Prunus serotina tree (a plant native to eastern North America), which is popularly used in several herbal medicines.

It is best known for its efficacy in treating colds and suppressing cough. It is also a commonly used ingredient in herbal cough syrups.

It is a powerful herbal expectorant that helps in loosening the thick dark brown mucus for driving it out of the chest, lungs, and throat.

Take a glass of boiling water and add to it 1 teaspoon of wild cherry bark powder.  Let the medicinal essence of the bark steep down in the water for 3 minutes. Strain the tea into a cup and drink it warm. It is better to drink 3 cups of Wild cherry bark daily till the sputum is entirely got rid of.

Alternatively, you can also consume the Wild cherry bark supplement which is available for purchase in herbal medicines stores.

We have just discussed the 7 most effective natural remedies that you can try as mucus expectorants.

Here are a few more natural remedies worth trying:

There are tiny hair-like projections on the surface of the airways called Cilia which help in clearing mucus and debris from the lungs.

Smoking tobacco damages the Cilia which results in the aggregation of mucus and debris in the lungs.

Cilia gradually regain function a week after quitting smoking, but it may take a few months for Cilia to regenerate to its actual status.

So it is natural that smokers continue to see coughing up brown mucus after quitting smoking for a couple of weeks more till the damaged Cilia is fully regrown.

Coughing up brown, red, pink, black, or dark green sputum is clearly a sign of an underlying disease.

If you notice an unusual change in color, consistency, or volume of mucus discharge while coughing, you have to consult your physician to diagnose the issue.

If your sputum is clear, yellow, or green, you may be safe to wait for a few days to meet the doctor.

Coughing up dark brown mucus is mostly because of infection affecting the respiratory system, acid refluxes caused by certain foods, or smoking. In most cases, you can get rid of the brown phlegm problem with simple home remedies that we have already discussed here.