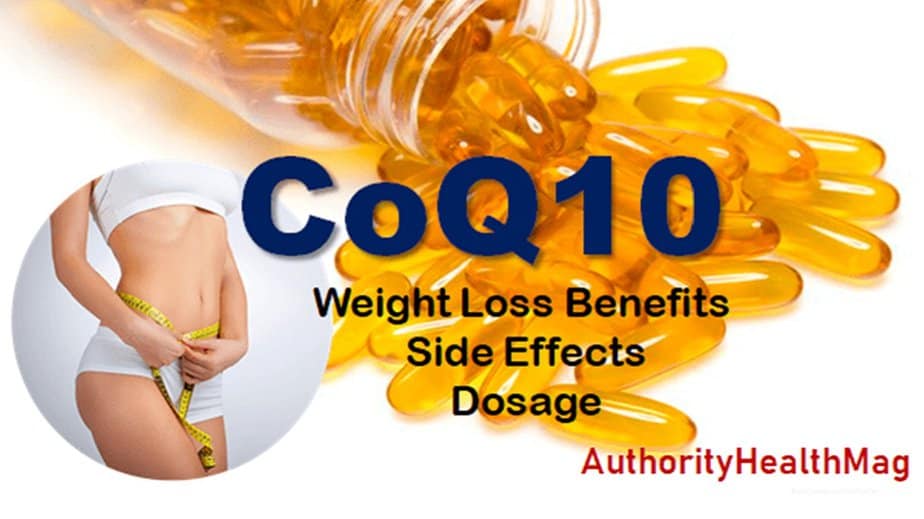 Obese people have been trying different ways to lose weight and remain healthy.

Exercising hard and eating a healthy daily diet is the best solution to keep your body weight under control. Also, numerous supplements and diets can help you lose weight.

Some recent studies have tested and proven the weight loss benefits of CoQ10.

It is worth having a detailed look at CoQ10 benefits, dosage, sources, and side effects.

TABLE OF CONTENTS
What is Coenzyme Q 10?
Dietary Sources
Health Benefits Of Coenzyme Q10
Does CoQ10 for Weight Loss Work?
Ubiquinone Vs Ubiquinol
How Much CoQ10 Supplement Should I Take?
Side Effects
Conclusion

CoQ10 is a substance similar to a vitamin. It is technically classified as a pseudo-vitamin.

It needs to be sufficiently found in most diets we eat. Our body produces Q10 by combining certain amino acids, vitamins, and trace minerals from our foods.

A healthy person has this substance present in their cells. The human body requires this vitamin to produce the energy necessary for sustaining the body.

Generally, a healthy person stores around 2 grams of CoQ10 in the body. We require about 500 mg of Q10 daily, and our body manufactures it from internally synthesized foods.

A healthy body creates enough Q10 enzymes for the body’s needs. However, as a person becomes older or sicker, their bodies may lose the ability to produce the required amount of Q10. Such people may have to depend on vitamin pills to meet the requirements of this pseudo-vitamin.

CoQ10 substances are naturally found in some of the most common foods. However, the body absorbs only a very small amount of CoQ10 in the foods we eat.

The best diets that help the body obtain or produce Q10 are:

Many of us need to gain more knowledge about the usefulness of vitamin Q10.

You will come across several tall claims on the effects of coenzyme Q10 and its health benefits.

It is expected to help with common health issues like:

It supplies the cells with the energy required for the growth and maintenance of the body cells. Also, it’s an important antioxidant that inhibits the generation of oxygen-free radicals in the body. Energy metabolism dysfunction can lead to several chronic diseases otherwise.

The effects of coenzyme Q10 supplementation might be useful for glycemic control, especially in type 2 diabetes patients. CoQ10 also stimulates an enzyme called AMPK, which controls energy balance in cells, reducing fat accumulation that can lead to obesity and type 2 diabetes.

Mitochondria are the main energy generators of brain cells. It is a key substance in the electron transport chain of the mitochondria.

Coenzyme Q10 increases fatty acid oxidation, a major energy source in the mitochondria. The Q10 enzyme will boost the mitochondrial functions of the membrane. Also, it alleviates inflammation and lipid peroxidation in conditions of metabolic syndrome:

The Q10 supplementation is recommended for reducing the side effects of certain medicines that may cause harm to the heart, organs, and muscles.

CoQ10 is also an effective antioxidant that protects the body from inflammatory damage to cells.

The antioxidant properties of this vitamin are expected to rejuvenate and increase the skin’s elasticity. For this reason, it is widely used in anti-aging cosmetic products.

In the United States, CoQ10 supplementation is available under different names, such as ubidecarenone, ubiquinone, Q10, or Vitamin Q10.

According to one of the studies, the quantity of CoQ10 present in the seminal fluid of men correlates with their sperm motility and sperm count.

According to a study published in the Journal of Endocrinological Investigation, when 22 infertile men took a CoQ10 supplement for 6 months, this increased their sperm count and sperm motility.

Another study in 2013 in the Journal of Assisted Reproduction and Genetics suggested a global improvement in sperm parameters with the intake of CoQ10.

Does CoQ10 for Weight Loss Work? 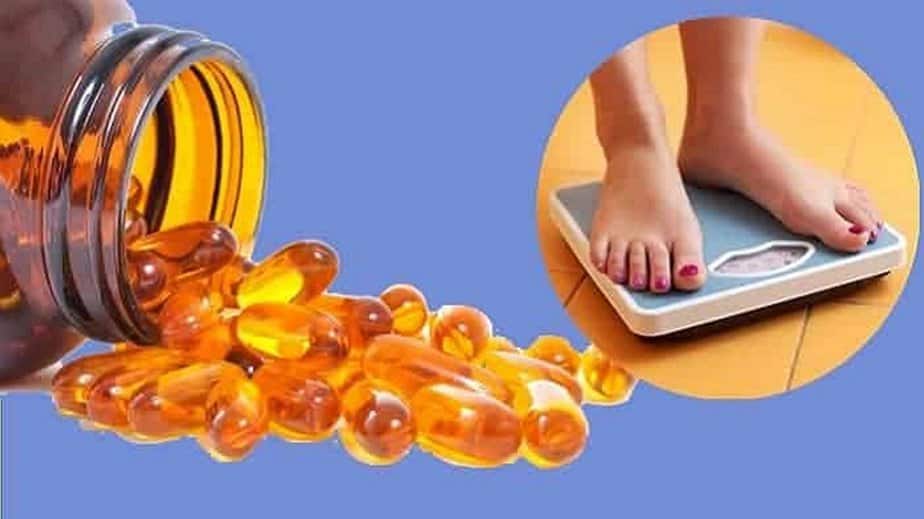 CoQ10 can regulate carbohydrates and fatty acids by helping the body use them for energy. This compound transforms the nutrients into ready-to-use energy storage called adenosine triphosphate (ATP).

A 1990 study suggests that Q10 supplementation could be used as a metabolism index. This study found some correlations between Q10 levels and fat mass. In older men, as the fat mass increased, the levels of coenzyme went down.

An increase in Q10 can result in higher use of fatty acids, increasing metabolism and checking obesity. It helps to decrease systolic blood pressure, body weight, and fasting blood glucose levels.

It is an important part of the Krebs cycle, a series of chemical reactions that turns body fat and glucose into ATP. This process may help in fat loss.

When you have inadequate levels of CoQ10 in your body, the foods you consume are not fully converted into energy. This leads to a buildup of fat deposits in the body, which can cause obesity.

Thus, it is taken for granted that taking the requisite amount of CoQ10 in supplement form is beneficial for increased fat burning.

Unfortunately, more studies need to be done to support the effectiveness of Q10 in weight loss.

Some counterclaims negate the effectiveness of CoQ10 help with weight loss.

According to a study published in the Journal of Alternative and Complementary Medicine, CoQ10’s weight loss benefits are practically nil.

The Q10 vitamin, which naturally occurs in the body, may correlate with fat burning, but this same effect may not be enhanced by taking Q10 supplements.

Ubiquinol is the antioxidant form of CoQ10, and its reduced form is called ubiquinol.

Ubiquinone, when used by the body, is transformed into ubiquinol.

The coenzyme is usually found in the mitochondria, the powerhouse of cells where energy production happens.

CoQ10 acts as an electron donor or acceptor in the mitochondria’s energy production process.

When these two types of coenzymes Q10 are in equilibrium, our body derives maximum benefits from them.

Our body can turn CoQ10 into a reduced or oxidized form according to its needs.

How Much CoQ10 Supplement Should I Take?

People need clarification about how much CoQ10 they need per day.

Another study in Denmark tried to trace the amount of this enzyme in the daily diet. This study showed that Q10 from daily diets ranges from 3 to 5 mg daily. However, our body absorbs only about 8 percent of the Q10 in foods. Thus, we get only 0.24 to 0.4 milligrams of Q10 daily from our diet.

Synthesizing Vitamin Q10 is a complicated 17-step process that might malfunction due to poor health conditions. The bidirectional synthesis of this enzyme requires other vitamins, trace elements, and amino acids.

Vitamin Q10 is relatively scarce in the foods we usually have.

If you are taking a CoQ10 supplement, people under 60 may require about 100 mg daily.

If you are over 60 or on a statin drug, your intake of the coenzyme Q10 weight loss supplement should be about 100 to 200 mg per day.

CoQ10 is fat-soluble, so it is better absorbed with a meal rich in oil or fat.

Supplementing with CoQ10 is safe, according to various recent research.

However, taking CoQ10 supplements for a long period or in higher doses may cause side effects that can worsen health conditions.

Some people have reported experiencing insomnia after taking over 100 mg of coenzyme Q10 per day.

One of the recent studies has shown that people taking 300 mg of vitamin Q10 per day developed elevated levels of liver enzymes.

Some users of Q10 supplements have also reported experiencing side effects such as sensitivity to light, headache, irritability, heartburn, dizziness, fatigue, nausea, abdominal pain, or rashes.

Medicines for high cholesterol and blood sugar can lower the CoQ10 levels in the body and reduce the effects of vitamin Q10 supplements.

Taking Q10 supplements can reduce the body’s response to blood thinners and decrease insulin requirements in people with diabetes.

Some clinical studies and reports suggest that CoQ10 may lower blood pressure. The change usually happens after 4 to 14 weeks of taking the Q10 supplement.

However, never take the CoQ10 supplement to lower your blood pressure, as this may produce other side effects on your health.

The human body makes CoQ10, and the cells use it to produce the energy required for cell growth and maintenance.

This coenzyme also functions as a powerful antioxidant, which is good for preventing or healing inflammatory damage occurring to the cells.

CoQ10 is used for other purposes as well. Coenzyme Q10 is expected to reduce heart failure, prevent cancer, and help with periodontal disease and muscular dystrophy.

Some use the CoQ10 diet supplement to fast recover from fatigue caused by exercise or boost energy; aids your weight loss efforts.

Vitamin Q10 also helps in reducing the harmful effects of certain prescription medicines on muscles, the heart, and other organs.