Have you tried the Apple Cider Vinegar (ACV) for the removal of warts yet?  If not, it is really worth trying. You will be amazed at its results.

Warning: While starting any new treatment or diet, seek advice from your physician or any other qualified health provider.

The ACV remedy is better than most of the prescription medicines for warts available over the counter. It works well for all common types of warts that appear on any part of the body externally.

After acne, a wart is the most common dermatological issue faced by most people.

It is possible to get rid of warts with inexpensive natural treatments like apple cider vinegar. The ACV treatment is a great solace to millions of people who suffer from this skin disease all over the world.

CONTENT
What Are Warts?
Does Apple Cider Vinegar For Warts Removal Work?
How To Use ACV For Getting Rid Of Warts?
Stages Of ACV Warts Treatment
Does ACV Help In Removing Genital Warts?
Does ACV Cause Scars On Skin?
The Bottom Line

A wart is a small, hard, benign growth on the skin. It has a rough texture and is caused by viruses, particularly one of several kinds of HPV (human papillomavirus).

The HPV virus enters the thorough body through bruises, injuries, or tiny cuts on the skin.  Wart viruses are contagious, but their spread from one person to others is minimal.

Warts can spread by direct contact with the HPV viruses or something that touched it. For example, the virus that causes warts on the finger can spread to the face through nail-biting or touch.

Genital wart is quite different from all other forms of HPV infection. It is a sexually transmitted infection (STI) caused by certain strains of the human papillomavirus.

Most people get common warts which usually appear on fingers, around the nail, and on the back of the hands.

Folklore on numerous uses of vinegar is colorful and practical.

According to the Online Archive of American Folk Medicine,  a Babylonian courtier (c.5000 BC), ‘discovered’ wine, formed from unattended grape juice, leading to the eventual discovery of vinegar and its use as a food preservative.  It is said that Hippocrates (c.420 BC) used vinegar medicinally to manage wounds. You can find hundreds of such facts on several natural remedies and household uses of vinegar in folklore achieve.

In the writings of US medical practitioners dating to the late 18th century, many ailments from warts to croup, poison ivy, stomach ache, and obesity were treated with vinegar, as reported in a MedGenMed research article.

The apple cider vinegar consists of both malic acid and acetic acid. This also contains pectin, potassium, and several other minerals, vitamins, and trace element which is usually present in apple fruit.

The acetic acid and malic acid in ACV are antifungal and antiviral agents that help to get rid of various viral and fungal infections affecting the body, including warts and tumors.

Warts treatment with ACV has been in practice since ancient times.

It works well to get rid of common warts (Verruca Vulgaris), Filiform warts, Plantar warts, and Periungual warts.  However, there aren’t any extensive studies that explain the actual benefits of ACV in wart removal. It is a traditional vinegar treatment that has carried on down the ages as a trusted home remedy.

Some of the recent findings on ACV do indicate that vinegar does not kill the virus (Human Papilloma Virus) that is causing warts. Actually, it burns, and peels of warts from the skin, and in this process HPV viruses housed in warts also get peeled off.  Even after the peel-off, some latent HPV virus might still remain lodged in the skin tissues which may give rise to the future growth of warts.

Caution: ACV remedy for warts works great, but it is a bit harsh on the skin. Most patients who use ACV might experience pain and discomfort immediately after applying it.  Salicylic acid (usually mixed in ACV) and cryotherapy are the most frequent treatments for common warts. These treatments for warts are painful and cause scarring, and have high recrudescence rates. Chemical burns from apple cider vinegar can cause erosions of skin and scarring.

How To Use ACV For Getting Rid Of Warts?

Warts removal with apple cider vinegar involves a very simple procedure. The treatment should be done regularly for a week or more to get the desired result.

Here are the simple steps involved in the treatment:- 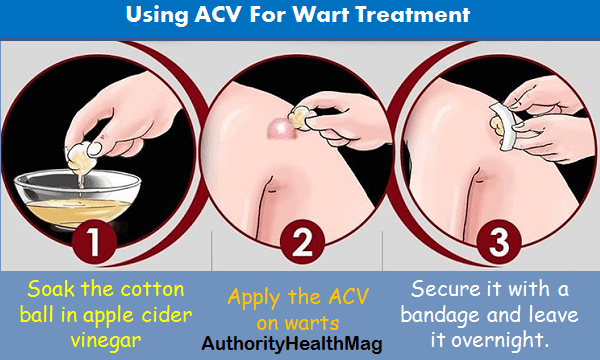 The procedures of warts removal with apple cider vinegar are fairly easy. However, there are a few important stages of this treatment that you should be aware of.

The first 2 days of the treatment are critical and bothersome. When you apply the ACV for the first time on the wart, it will begin to swell up and cause pain in most people. At the initial days of treatment, burning or itching sensations might also happen to some. You are lucky if you do not experience pain and irritation.

After 2 to 3 days of treatment, the wart turns black and becomes dry under the influence of ACV. After warts have turned black, you can expect it’s peeling off within the next few days. It is not necessary that all warts will respond to the treatment similarly; some might take more days for blackening and final peeling off.

Finally, the wart peels off. But do not try to pull out warts forcefully but allow them to fall off naturally. Usually, some portions of warts will still be left inside after the outer peel-off. You need to continue with the treatment till you can feel that the wart is removed fully.

ACV is not recommended for genital warts as it is a more complicated disease with different symptoms and causes altogether. This needs to be treated by a physician under vigilant medical examination and formal treatments.

The apple cider vinegar is harsh on the skin. Skins on the genital area may not withstand the harshness of the treatment. The acids present in ACV would make the skin peel off in the area where it is applied. Any wounds (especially from acid burns) can lead to skin inflammation and viral infection in the genital area.

Secondly, the ACV remedy for genital warts has failed in most cases. It is not at all possible to use ACV for warts on the inner skin of genital organs because of the strong acids in them.

Does ACV Cause Scars On Skin?

The apple cider vinegar remedy for warts may not be safe for all types of skins and warts.

When you are trying to remove warts lodged in the internal area of the skin, in some cases, the acids in ACV may burn off some skin tissues other than warts. ACV does burn both the wart and your healthy skin. It will result in scar marks on the skin, especially if you have skin prone to hyperpigmentation.

To avoid scar marks on the skin, you should use a mild and diluted form of ACV; also do not spill or spread the ACV on the skin surrounding warts. It is safe to apply petroleum jelly on the skin around the wart to prevent burning of the skin. If you know that your skin is prone to scars, you could even think of other alternative remedies for warts.

After the healing of warts, you could use some good scar removal creams to make your skin appear normal and healthy. 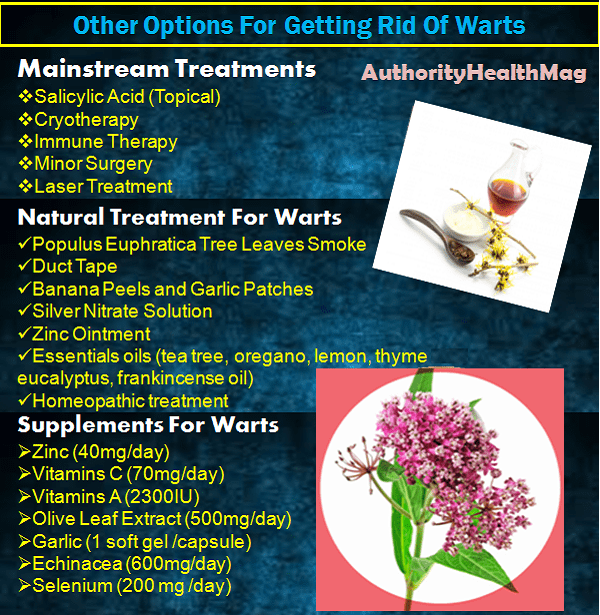 The apple cider vinegar for warts removal is a proven remedy that works. It helps to peel off warts together with the virus housed in it.

It is an easy and effective treatment that has been in use for hundreds of years. After using the apple cider vinegar warts removal solution, you can be happy that you got rid of warts easily and inexpensively. In most cases of this treatment, removed warts do not return, but in a few cases, it might happen as well.

When you have tried this treatment or you have already done it, please post your feedback in the comment section below.

Disclaimer: This website and all of its contents are for informational purposes only. The advice on this site does not have sufficient backing to support the effectiveness and side effects of apple cider vinegar warts treatment.

Other Benefits of Apple Cider Vinegar

What kills a cold sore fast?

How do you use apple cider vinegar for eczema?

How do you use apple cider vinegar as a toner?