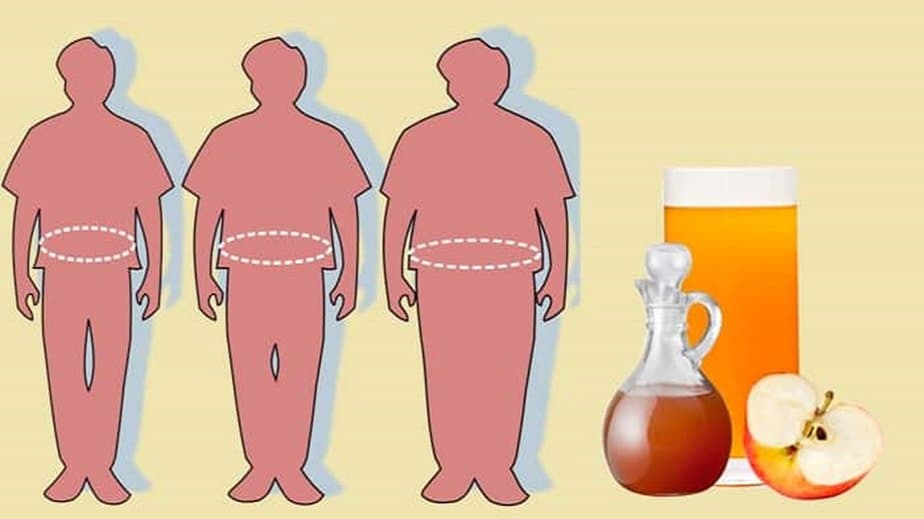 The weight loss benefit of apple cider vinegar (ACV) has been well-known for centuries.

Unlike the many fad diets and supplements for rapid fat loss that come and go, ACV is a proven natural supplement that will help you lose weight gradually and steadily.

The vinegar obtained from the enhanced fermentation process has several preventative and curative health benefits.

When you consume small amounts of acetic acid through apple cider vinegar, it activates your metabolism to help your body use fat as energy rather than storing it.

In this article, we shall look closely at using apple cider vinegar for fat burning, its effectiveness, and the right way to use this diet to shed pounds naturally. Here are its benefits:

The research report published in the European Journal of Clinical Nutrition in 2005 indicates the effectiveness of apple cider vinegar in appetite suppression.

According to the above study, the participants who had bread and apple cider vinegar were less hungry than those who only had bread. The acetic acid present in ACV makes the person feel fuller and suppresses the appetite for many hours.

There is also evidence that people who consume a tablespoon of ACV 30 minutes before meals have a reduced appetite and eat less during meals.

The pectin substance in apples and ACV reduces the appetite and makes a person feel fuller with less food intake. An apple contains about 1.5 grams of pectin.

The blood sugar level has a lot to do with our appetite and eating habits, which are decisive factors in obesity.

According to ACV study reports, people who took the vinegar had lower blood glucose levels after meals.

Studies also showed that a person who took more ACV could maintain a balanced blood glucose level even 90 minutes after the meal.

ACV increases the rate of metabolism

Apple cider vinegar is expected to increase the rate of metabolism,

Apple cider vinegar is good for a healthy metabolism because it has organic acids and enzymes in it.

One of the studies conducted in 2009 in Japan involved giving acetic acid to rats fed on a diet high in fat. The result of the study showed lesser body fat accumulation in rats fed with acetic acid.

Even though there are not many studies on this, it is assumed that people who consume ACV rich in acetic acid would experience an improved metabolic rate and faster fat burning.

The right amount of insulin hormone production and the supply of it into the bloodstream ensure the immediate conversion of blood sugar into energy needed by the body.

Healthy functioning of the insulin hormone reduces fat storage in the body and the chances of type 2 diabetes.

Apple cider vinegar may improve the production and functioning of insulin hormones. The organic acids in apple cider vinegar have a noticeable effect in keeping the blood sugar levels balanced; this also helps minimize the bad effects of type 2 diabetes.

One of the main reasons for poor metabolism is the presence of a high amount of toxins in the body.

It is found that regular consumption of apple cider vinegar helps flush out the toxins from the body, especially those accumulated in the colon. This vinegar also detoxifies the liver.

Most body-detoxifying drinks and tonics contain apple cider vinegar as one of their major ingredients.

The enzymes and organic acids in the ACV greatly influence promoting healthy metabolism that reduces fat storage in the body’s fat cells.

As discussed above, it helps us eat less and suppresses our appetite. ACV also reduces excess water retention in the body; it leads to the shedding of body weight due to high water retention.

Vinegar has properties that help keep blood sugar at moderate levels even after meals. A teaspoon or two of ACV consumption before meals is good as it would help reduce the usage of insulin hormone for blood sugar metabolism.

The weight loss result from ACV is indeed limited, but regular consumption of it will maintain a steady reduction in body weight.

Going by the general observation of the results presented by various studies on ACV for weight loss, daily consumption of two spoons of vinegar will lead to 15 to 20 pounds of weight loss in one year.

A research trial conducted in 2018 with 39 dieters found that those who took apple cider vinegar daily for 12 weeks lost considerably more weight than those who did not.

How to use apple cider vinegar for weight loss?

Most people may find it hard to drink apple cider vinegar in its undiluted form because of its harsh taste and acidity. Most home remedies recommend diluting one or two teaspoons of ACV into a glass of water and drinking it before each meal.

For some people, it may take a longer time to get used to the ACV diet.

As you add apple cider vinegar to your diet for weight loss, you can start with a teaspoon of it for a week and then gradually increase the intake up to 2 tablespoons a day in a month.

The best weight loss result is possible when ACV is consumed about 40 minutes before meals.

Some natural remedy practitioners recommend taking a tablespoon of ACV on an empty stomach in the morning for maximum benefits.

People with high acidity issues may find it difficult to follow this diet; in such cases, it is good to get a doctor’s opinion before starting this diet.

It is best to avoid the intake of undiluted vinegar, as its strong organic acids may damage teeth and irritate or hurt the tender tissues in the throat and esophagus.

Note: High intake, or more than 2 tablespoons of apple cider vinegar daily for a longer duration, may become harmful to health. Consuming it undiluted over time can directly lead to tooth enamel deterioration. It may also contribute to low potassium levels.

Related article: How to use apple cider vinegar?

If combined with a healthy diet and physical workouts, you can only expect good fat loss results with the apple cider vinegar diet.

You must maintain a low-calorie and low-fat diet.

Let your diet contain more protein, whole grains, vegetables, and fruits, as they can give your body a healthy amount of vitamins and nutrients without too many calories and fat.

Strictly avoid all refined and processed foods for better weight loss results from the ACV diet. It is also important to avoid soda and soft drinks, which are rich in calories.

Make sure to drink at least eight glasses of water daily, as it will suppress the appetite and be important for a healthy metabolism and hydration of the body.

If you don’t have the time or convenience to work out at a gym, at least walk or jog 3 miles three to five times per week.

You can lose at least 10 pounds a month with an ‘apple cider weight loss diet’ if you follow up with proper diet and exercise as suggested above.

Some of the evidence from studies suggests that ACV may help to lose weight, but experts say it’s far from a magic bullet for weight loss.

It is advisable to dilute apple cider vinegar with water or to add it to meals and beverages before consumption.

Before using apple cider vinegar, anyone with ongoing medical concerns or those who take medication should speak with their doctor.

Beyond its use in salad dressing, apple cider vinegar has also other benefits like treating yeast infection, warts, cold sores, and hemorrhoids.