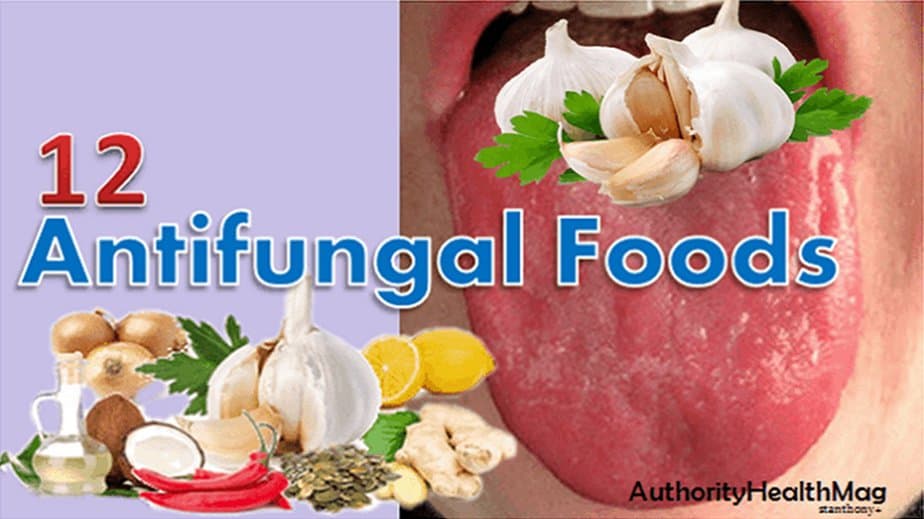 These foods allow the body to defend against fungus infections and other pathogens that cause diseases. They help keep your microbiome in check.

The Oxford Journal on Clinical Infectious Diseases says, “In the past decade, the frequency of opportunistic microbial infections has increased, and the spectrum of fungal pathogens has changed.” Incidences of infections like Candida have become more common now than ever before.

To fight Candida, patients are given a list of Candida cleanse diets for faster recovery.

What Does “Antifungal” Mean?

The term “antifungal” refers to anything that limits or prevents the growth of fungal organisms like yeasts.

An “antifungal medication” is a pharmaceutical fungicide or fungistatic used to treat and prevent mycoses. Common microbial issues include athletes’ feet, ringworm, candidiasis (thrush), and systemic infections such as cryptococcal meningitis.

You must avoid foods that feed the growth of Candida, such as alcohol, caffeine, sugar, dairy, beans, starchy vegetables, and high-glycemic fruits.

There are effective drugs to treat skin diseases caused by candida overgrowth. However, frequent use of drugs leads to the development of drug-resistant fungus strains. In the long run, drugs may upset the healthy functioning of the kidney, liver, and pancreas.

Some foods that we eat have inherent properties that have antifungal effects. It does not mean that just by eating those foods, you can get rid of diseases like ringworm, Candida, or athlete’s foot. These foods boost the immune system with their antifungal capacity to some extent. Including them in your diet can help keep your body healthy and free from infection.

The best diets and foods to prevent fungal infections like Candia and athlete’s foot include:

Garlic contains potent antifungal and antibacterial properties that can aid our body in keeping disease-causing pathogens at bay.

This pungent-tasting bulb from the species in the onion genus (allium) contains an enzyme called “allinase.” When this enzyme comes into contact with another compound called allin, combining these two creates allicin, a potent antimicrobial, and antifungal agent.

Ajoene is another compound found in garlic that can ward off common microbial issues in body tissues.

You will also find that many natural therapies for such infections usually contain garlic as a major ingredient.

You can use garlic in your food to add flavor. It is also nice to drink garlic juice or directly eat garlic occasionally. However, it would be best if you weren’t taking garlic on an empty stomach, as this might lead to stomach burn.

Ginger is a popular spicy root herb used to add flavor to foods. Ginger roots, both dry and raw, are a major ingredient in several natural remedies for common ailments.

Ginger contains powerful antioxidant and antifungal properties. According to one of the studies, the naturally occurring gingerol and shogaol present in ginger roots can help your body inhibit the growth and proliferation of Candida albicans.

Still, more research is required to verify the effectiveness of ginger as a candida killer.

Ginger can also stimulate and enhance the immune system, which may otherwise stay dormant.

The anti-inflammatory properties of ginger help to minimize the inflammation caused by fungal infections like Candida overgrowth.

You could generously use ginger as a flavoring agent in most dishes you prepare, and there are also unique ginger recipes.

Adding ginger to your tea, vegetable smoothies, jams, pickles, and sauces is beneficial.

Phytochemicals in medicinal plants, like onion, garlic, ginger, etc., have health benefits and help in antimicrobial activity against some pathogenic bacteria and fungi.

According to a study in the Research Journal of Medicinal Plants, extracts from onion bulbs and roots have an antifungal potential for eliminating the fungal gut microbiome. The study endorses the possibility of using them to eliminate fungus for medicinal and agricultural purposes.

Another study appeared in the Ulster Medical Society. The scientific examination of the antimicrobial properties of onions and six other plant species confirmed the presence of antibacterial and antifungal properties.

Onions also help flush out excess fluids in the body. This is beneficial for treating Candida patients suffering from high body water retention.

You can use onions in various dishes you prepare as they blend perfectly with most foods. It provides an amazing taste, especially when preparing fried vegetable dishes and meat.

According to one study, it was found that cayenne pepper and other chili peppers could effectively prevent the formation of fungal pathogens called phomopsis and Colletotrichum.

Cayenne pepper has the natural ability to kill fungi and prevent the development of fungal pathogens.

One of the investigations into the vitro fungal activity of the Cayenne pepper proved that it could resist 16 different fungal strains.

Cayenne pepper also helps to improve the immune and digestive systems. It helps prevent Candida in the bowels. It improves metabolism and blood circulation, which helps reduce fatigue caused by Candida infection.

Cayenne pepper is a pungent, flavor-giving spice that you can easily add to most of the vegetables and meat dishes you prepare at home.

Rutabaga can increase the defense mechanisms of your immune system against harmful pathogens.

One serving of rutabagas possesses 53 percent of Vitamin C, which can give an excellent boost to immunity.

It is a unique vegetable with a diverse composition of antioxidant compounds. Glucosinolate is a rare sulfur-rich compound that can potentially prevent and control inflammation, especially in cancerous tumors and pathogenic infections.

The carbohydrate content of rutabaga initially feeds the Candida overgrowth, but its natural antifungal properties may aid in the fight against candida fungus.

You can include this versatile vegetable in your daily diet in many ways. Mix it in your vegetable soup, make rutabaga fries, or make rutabaga mash. Just like potatoes, they can gel well with most other vegetables.

Candida in the stomach can be controlled by consuming probiotic foods, which enhance the gut’s healthy bacteria. Probiotics are “live microorganisms, which, when administered in adequate amounts, confer a health benefit on the host.” They are often found in fermented foods.

Probiotic foods help build a healthy digestive system and immune system, which is very helpful for preventing diseases that are caused by pathogens.

Since the mid-1990s, clinical studies have suggested that probiotic foods can help remedy several gastrointestinal illnesses, prevent allergies, and remedy vaginal and urinary infections in women.

Before probiotic foods can be used to treat Candida and other fungal infections, more research and clinical trials need to be done.

Coconut oil is a perfect antifungal diet for Candida and other pathogenic maladies. The Lauric acid and Caprylic acid amply present in this oil effectively inhibit Candida overgrowth and strengthen the immune system.

Make this oil your preferred cooking oil, and eat 1 or 2 teaspoons of raw coconut oil daily. Directly apply coconut oil regularly on fungus-infected areas of the skin; this is a powerful remedy for getting rid of infections. Use it directly on the skin and even sensitive areas without worry.

According to a study published in the Journal of Clinical and Diagnostic Research, olive and cinnamon oils possess antifungal properties that help eliminate Candida. The study covered 1376 patients clinically suspected to have fungal septicemia. According to the final result of the study, cinnamon and olive oil showed marked sensitivity against Albicans and non-albicans.

Oleuropein, a natural chemical in olive oil, is a powerful antifungal agent. This chemical also helps boost the immune system’s response to the overgrowth of Candida.

Make olive oil one of your cooking oils, and add it to your favorite foods to add flavor. You can also directly apply olive oil to yeast infections and other infections caused by microbes.

Cinnamon essential oil is a fantastic antimicrobial food. Studies have proven the ability of cinnamon oil to suppress the fungi responsible for the yeast Candida.

The caprylic acid in cinnamon suppresses yeast overgrowth. Cinnamon oil and extracts are traditionally used in natural remedies for treating H. pylori and Candida. However, those suffering from stomach ulcers should not use cinnamon in foods or external applications.

You can use cinnamon as a flavoring to add spice to your foods, smoothies, and juices.

The eugenol in cloves is a powerful essential oil that works as an effective antifungal remedy. It works well for microbial infections on the nails.

Its antiseptic properties allow it to kill the Candida yeast and help boost the immune system.

You can use clove buds as a flavoring spice in food preparation, smoothies, tea, and juices.

Marine seaweeds are known to be antifungal foods that help prevent and treat all kinds of microbial infections.

According to a research report published in the Asian Pacific Journal of Tropical Biomedicine, seaweed extracts have strong antibacterial and antifungal inhibition capacities. This study used seven different solvent extracts of seaweed, and all killed bacteria.

Seaweeds are nutrient-rich antifungal foods that can help in beating Candida and others.

Fungus and other pathogens in the gut do well when toxic waste is in the intestines and colon.

Having seaweed in your diet helps to cleanse the toxic pollutants from your gut and improve the health of the intestinal tract.

If you search a little, you’ll find several recipes with seaweed that you can integrate into recipes like salad dressings and soups.

Various important medicinal properties, including anti-diabetic, antioxidant, anti-carcinogenic, anti-inflammatory, and others, make pumpkin and pumpkin seeds an important vegetable you should not miss out on.

There are several pumpkin seed recipes that you can prepare at home; you can also add them to smoothies and ice cream.

You can use flax seeds or chia seeds in place of pumpkin seeds.

Fungal infections like Candida have become rampant for a few decades.

Instead of dangerous prescription medicines, a naturally antimicrobial substance, like curcumin found in turmeric or acetic acid in apple cider vinegar, may kill Candida.  Eating a lot of leafy greens and cruciferous vegetables can also suppress the growth of yeast and keep candida under check.

You should consult your physician to get the last word on curing microbial infections.

Antifungal diets are not a total therapy but an additional boost to your regular treatment. Mostly, you should have anti-Candida diets to fortify your immune system.