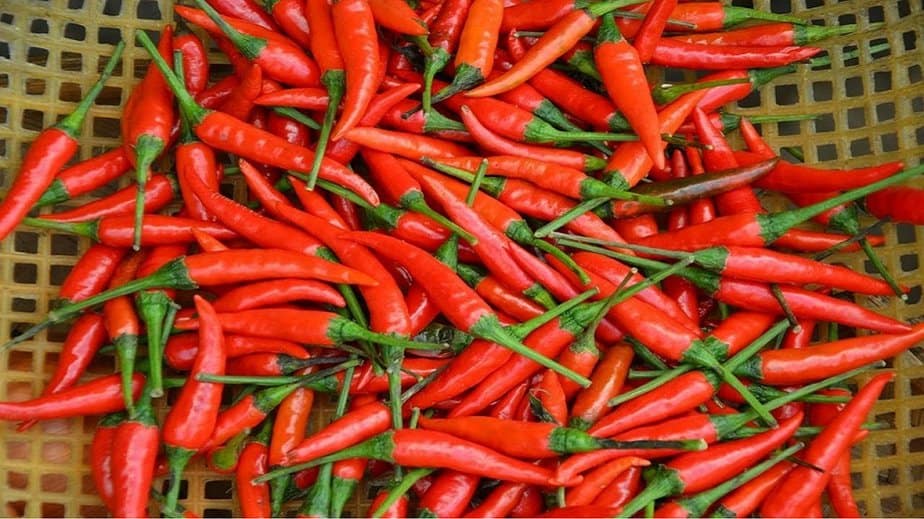 Japones peppers are often used in Asian, Caribbean, and Latin cuisines. It is also known by different names, such as Hontaka, Santaka, Oriental, Chinese, and Japanese chili.

The name “Japones” (pronounced ha-PO-NAYS) is the Spanish word for “Japanese.”

Contrary to its name, this chili is native to Mexico, especially, in Jalisco and the Central Valley of Mexico; Spanish and Portuguese explorers carried it to Europe and Asia in the 15th and 16th centuries.

It is often confused with the Japanese specialty pepper Yatsufusa, also known as “chiles Japones.”

If you want to replicate the authentic flavors of some of the Schezuan and Hunan dishes, you must know about Chile Japones.

TABLE OF CONTENTS
What Are Japones Chile Peppers?
Chile Japones’ Scoville Heat Level
What Do They Look And Taste Like?
Uses In Cooking
Chile Japones Vs Chile De Arbol
FAQs

What Are Japones Chile Peppers?

It is a moderately hot chili pepper that belongs to the Capsicum Annuum species. The dark reddish-brown pepper is similar to Chile de Arbol with a wide body and pointed tail-end. In comparison to Arbol, they have thicker skin and flatter bodies.

Originating in South America, it’s now a popular cultivar in Japan, China, Korea, and a few other regions across Asia and the Caribbean. Chefs call them “fire bringers” because it adds a delicious kick of heat without overpowering the original flavors of the recipe and gives the dish a more complex flavor.

Today, they are extremely popular in Schezuan and Hunan cuisines. You’ll also find it used in Latin American and Caribbean cuisines. In fact, it’s one of the most commonly used dried red chilies in Indian and Asian dishes.

They stay at the lower end of the medium-heat level, with a heat level ranging from 15,000 to 30,000 Scoville heat units on the Scoville Scale. In comparison to Jalapenos (average 5,000 SHU), they can be 2–12 times hotter. The median heat of this pepper comes in the same range as that of the serrano. The hottest Santaka has a heat point that equals the mildest cayenne.

Overall, they have a heat profile similar to Chile de Arbol, and these two can be used interchangeably in your recipes. While comparing, they do not come anywhere close to its fiery Asian cousin, the Tien Tsin, at 50,000 to 75,000 SHU on the Scoville Scale.

In appearance, they’re typically elongated and small, somewhat similar to cayenne in shape. They grow around 2 inches long and half an inch wide with a pointed tail-end. They start off with a green color but turn reddish-brown on ripening. Some varieties of peppers put on a brighter yellow color as well. Dried Japones take on a rusted or burnt red.

With regard to flavor, they’re more or less neutral in taste, like the cayenne. They hardly add any flavor to your dish except the spiciness. However, the dried ones do have a noticeable earthiness and mild smoky flavor, and they’re spicier than the fresh ones.

They are popular because they add an enjoyable moderate heat to dishes without altering the original flavors of the recipe.

Dried Japones are commonly used in a wide array of dishes in Japanese, Indian, and Chinese cooking, especially in stir-fries, chutneys, and sauces. Generally, before adding them to dishes, they’re roasted in oils to give them a smoky-oily flavor and crispy texture.

They are used fresh or dried, ground or whole, and chopped or pureed. Also, the dried peppers are ground into fine powder or flakes to be used in dry rubs, roasted dishes, or as a substitute for regular red chili powder or red pepper flakes.

In Asian cuisines, often dried peppers (usually sautéed in vegetable oil) are added to the dishes and are typically removed prior to serving the meal. You may also leave them in the dish if you wish the meal to be extra spicy.

Like the Arbol or Tien Tsin, chile Japones make excellent for infusion, spicing up anything from vodka, gin, or oil, as well as many citrusy beverages and cocktails.

More tips for use:

The Japones chilies are a lot like Chile de Arbol in appearance, but the former is a little wider in the middle and becomes flat when dried.

What is identical between these two is their heat profiles; both rank 15,000 to 30,000 SHU on the Scoville Scale.

Arbol chiles have a slightly complex flavor with fruity undertones compared to the clean and neutral flavor profile of Japanese chili. However, you can use them interchangeably in any dishes that call for either of them.

In Asian cuisines, Japones and Tien Tsin are the preferred choices because their neutral flavors let the original flavor of the dish shine.

In terms of availability, Arbol pepper is a Mexican spice that is mostly cultivated in Mexico and a few other regions of Central and South America. whereas the Japanese pepper is primarily popular in Asia and the Caribbean, especially in Japan and China. What is a good Japones pepper substitute?

Arbol pepper is the highly preferred substitute for its Japanese counterpart, as both have the same level of heat and similarity in appearance and flavor. But Chile de Arbol has a slightly fruity taste. Thai Chile Peppers (Bird’s Eye), Guajillo Chile Peppers, or Serrano Peppers can also be a possible substitute for Chile Japones. Flavor-wise, Tien Tsin is the perfect replacement for it, but about five times hotter.

Where can you buy Japones peppers?

They can be found relatively easily in larger Mexican spice stores and in Japanese, Korean, Chinese, and Indian markets. You get to buy the dried chiles in bulk, without the pepper caps and stems. Also, dried ones can be bought from online stores; you can also pick up seeds for growing them in your garden. You can buy dried whole Japanese chili peppers (like El Guapo) from online stores.

How hot is Japones dried pepper?

Dried Japanese chile peppers have more intense heat and taste than fresh peppers because drying concentrates the flavors. Dried peppers are highly valued for their clean taste and enjoyable heat. The heat level of the dried version ranges from 15,000 to 30,000 SHU on the Scoville Scale.

How do you use dried Japones pepper?

The dried version of it is highly versatile and can be used in different ways according to the need of the recipes. Often, its dried version is sautéed in hot oil and added to the dishes as whole chilies or broken pieces. They can also be ground into fine powder or chili flakes to be used like cayenne flakes or powder. Dried Japones chiles are often soaked in hot water for 10 minutes, and then they’re chopped or pureed to be used in various dishes.