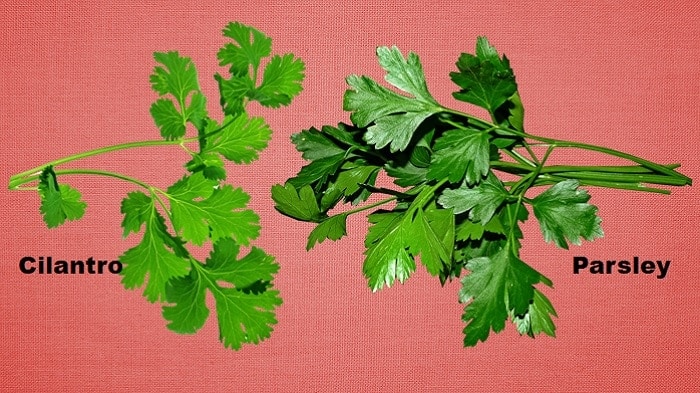 Parsley vs. cilantro comparison is worthwhile for many of us often mistake these herbs each other. Apparently, these two leafy green herbs could be identical twins but in reality not so.

Are these two herbs the same or different? Can I use parsley and cilantro interchangeably?

This article reveals the similarities and differences between cilantro and parsley, so you can figure out which one to use in your recipe.

TABLE OF CONTENTS
What is Parsley?
What is Cilantro?
Parsley Vs. Cilantro
Similarities Between Parsley And Cilantro
Differences Between Cilantro And Parsley
Can I substitute parsley for cilantro and vice versa?
Which is better cilantro or parsley?
The bottom line

Parsley, (Petroselinum crispum), is a hardy biennial flowering herb in the family of Apiaceae, native to the Mediterranean region.

Today, it’s a popular culinary herb used in Middle Eastern, European, and American cooking. By the way, this herb was widely used by ancient Romans and Greeks for garnishing and flavoring foods.

It has a mild, bitter flavor that pairs well with a wide variety of recipes. Its bright green fresh leaves make it an attractive culinary herb and its dried leaves are an essential part of several spice blends.

The two most common types of parsley are Italian flat-leaf and French curly-leaf. Restaurants often use the curly-leafed parsley as a garnish on their plating. If don’t have parsley, choose a substitute herb instead.

Cilantro is same as coriander leaves, a herb from the fresh leaves of the coriander plant (Coriandrum sativum). It’s a feathery annual plant of the parsley family (Apiaceae) native to the Mediterranean and Middle Eastern regions.

Cilantro, also known as Mexican parsley, Chinese parsley, or dhaniya in India, is used both as an herb and spice.

Recommended article: How to cook with cilantro?

Parsley and cilantro come from the same Apiaceae family of plants. Basically, these two herbs are aromatic, bright green, leafy herbs with similar appearance but different in taste and uses.

Apparently, they both look almost the same and thus many people mistake one for the other while shopping at a grocery. So then, how to distinguish parsley from cilantro? Parsley leaves are more pointed but cilantro leaves are more rounded. Also, cilantro has a strong, spicy citrusy aroma, while parsley has a mild herbal scent.

The aldehyde compound in cilantro can produce a soap-like flavor to some. This happens because some people have variations in a group of olfactory-receptor genes which can strongly perceive the soapy-flavored aldehydes.

Similarities Between Parsley And Cilantro

Parsley and cilantro are green leafy herbs that belong to the same family of plants.

They both look almost the same and have similar uses in different types of dishes. These two herbs are mostly used for garnishing and flavoring the dishes. Cilantro and parsley can be used as either fresh herbs or dried spices.

Both cilantro and parsley have similar health benefits as both of them are useful for keeping a healthy balance of blood sugar levels. The myricetin flavonoid in parsley is a powerful antioxidant with anti-inflammatory properties which lowers blood sugar levels. Cilantro, on the other hand, is useful for increasing the enzyme that helps process sugar in the blood.

Both these herbs are equally beneficial for heart health as they help to lower bad cholesterol and triglycerides.

They are a lot similar in nutrition as they both are good sources of Vitamins A and C. They also have a good amount of vitamin K and powerful antioxidants.

Differences Between Cilantro And Parsley

Some people often mistake cilantro and parsley for their similar appearance but they have significant differences in taste, aroma, uses, benefits, and more. Here are the major differences:

Cilantro is a feathery annual herb that lasts longer until the weather heats up in the late spring. Parsley is a biennial plant that will stay in good condition for about five months.

Parsley has thicker and curlier leaves which are small and pointed. However, the flat-leaved variety looks similar to cilantro leaves. Parsley leaves have a brighter green color and have more pointed serration of leaves.  Cilantro has flat leaves with a three-lobed structure, saw-toothed edges, and slightly rounded tips. Cilantro has green color, similar to emerald green.

Parsley has a mild flavor that is slightly spicy and peppery. Cilantro has a strong flavor which is a mixture of lemon and sage. For some people, cilantro renders a soapy flavor.

Parsley is commonly used in Mediterranean and Italian cuisines. Cilantro is a frequently used herb in Mexican and Asian cuisines.

Parsley is a mainstay in soups, pasta, stews, green smoothies, juices, and salads. Cilantro is a common ingredient in tacos, soups, salsa, or sprinkled pho or curries. Parsley is generally incorporated while the dishes are being cooked, while cilantro is added to dishes towards the end of cooking or after cooking.

Researchers have found that cilantro may aid in reducing heart diseases, obesity, diabetes, and the severity of seizures. It boosts energy levels and is beneficial for healthy hair and skin.

With a rich amount of vitamin K, Parsley helps in maintaining healthy blood clot levels and improves bone health. It reduces the risk of stroke, diabetes, heart diseases, and cancer.  This herb also helps to ease bloating and aids in digestion.

The antioxidants in cilantro help to detoxify and can help rid the body of heavy metals. This herb also contains antibacterial properties and protects the body from food poisoning.

Can I substitute parsley for cilantro and vice versa?

Cilantro and parsley render flavor and texture to recipes, but they cannot be used interchangeably in most dishes. However, in green salads and for garnishing either of them can be used.

Parsley is a versatile herb with mild bright flavors and can be incorporated into cooked dishes. On the other hand, cilantro has a much stronger citrusy flavor and is mostly eaten raw. If cooked, cilantro could diminish in flavor and lose its leafy texture.

Which is better cilantro or parsley?

Parsley and cilantro are great herbs in their own way. No matter what you choose, they both add flavor and color to your dishes. From the point of health benefits, they both belong to the same family of plants and have similar nutritional content.

Choosing the right herb largely depends on the taste profile of your recipe and your personal preferences. Some don’t like cilantro for its strong flavors, as well as its soapy taste which comes from aldehyde compounds in it. If cilantro is not your thing, replace it with other herbs like dill, Thai basil, or even parsley.

While buying the herb, choose the herbs that aren’t discolored or wilted.

Cilantro and parsley are bright green leafy herbs with a very similar appearance, but they have a very different flavor and uses in cooking.

The highly versatile parsley with mild herbaceous flavor is an important ingredient in several Mediterranean and Middle Eastern dishes. Fresh cilantro with a strong citrusy flavor is popularly used in Mexican and Asian dishes.

Both the herbs are nutritionally rich with similar nutrients and antioxidants.

How to freeze cilantro?

Can I substitute fresh cilantro for dried?

Can I use cilantro in place of culantro?

Is parsley a good substitute for chervil?