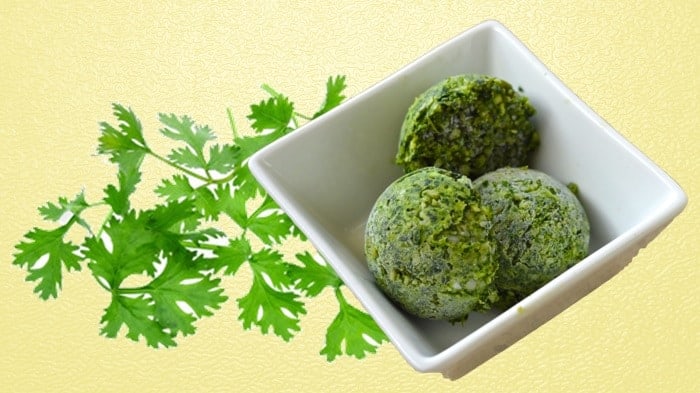 Can You Freeze Cilantro?

Freezing is an effective method to preserve green herbs like dill, thyme, chives, and many others. It not only gives them a longer shelf life but also helps to maintain spritely flavors and essential oils in delicate herbs.

Now the question, can you freeze cilantro? You sure can! You have got in this article the best ways to preserve fresh cilantro herb right in your freezer.

Like most other leafy herbs, cilantro can be frozen and it’s the best way to give longer shelf life to this tender herb. After thawing, you can simply toss a cube of frozen cilantro into your dish and cook as normal.  However, it may not work well in recipes that call for fresh cilantro such as salsas or garnishes. If properly stored, most frozen herbs stay in good quality for up to 6 months.

Preserving cilantro by freezing is also useful in storing abundant harvest of this biennial herb.  Also, freezing is the best way to protect the flavors of cilantro which are otherwise lost after drying or when exposed to heat.

Frozen herbs taste much closer to fresh than dried herbs; also retain most of their nutrients.  The main issue with the frozen herbs is their texture and appearance will be mushy and soft, so they aren’t attractive and aromatic as the fresh stuff.

How to Freeze Cilantro?

There are three methods for storing this green leafy herb in the freezer.

No matter which method you choose, clean cilantro well before storing it. Swish cilantro sprigs in cold water for a couple of minutes to get rid of the dirt and dust stuck on its leaves. Wet leaves can get damaged faster, thus it’s important to pat dry the leaves with a kitchen paper towel or in a salad spinner, and then lay the leaves on a layer of paper towel. Encasing the small bunches of leaves in the rolled-up paper towel will help in the complete absorption of moisture.

Here are the three methods to freeze cilantro:

The easiest and simplest way to freeze cilantro is to stash it in a zip-top freezer bag.

Most chefs recommend placing the freezer bag into another bag to give double bag protection to the leaves. Leaves removed from the stems are to be placed in the inner bag. After squeezing out the air from the bags, seal the bags tightly. Place the bags in the freezer and simply pull out the leaves whenever you want to use them.

For this, finely chop the fresh cilantro and press it into an ice cube tray, top the leaves with water or oil and freeze.

Otherwise, put the cilantro in a food processor with sufficient water or olive oil and make a puree. Transfer the puree into an ice cube tray and keep it in the freezer.

Once the cilantro is frozen in an ice cube tray, transfer the cubes into a zip-top plastic bag for long time storage. Frozen cilantro has a shelf life of up to six months.

Frozen cilantro in ice cubes is more effective for preserving the green color and flavor of this herb than simply freezing the leaves in zip-top bags.

Cilantro pesto frozen nicely in the ice cubes is effective for adding bright herbaceous flavors to salads, pasta, and more. The Parmesan cheese and olive oil in pesto act as a protective barrier between the delicate leaves of cilantro and the freezer.  Make the pesto with cilantro leaves and with slightly more oil than usual; transfer it into an ice cube tray. When it is very well frozen, pop out the cubes and stash them in a zip-top freezer bag. Frozen cilantro pesto will stay good for up to six months.

Related article: What to use in place of cilantro?

How to Use Frozen Cilantro?

While making soup, sauce, roast, or in other cooked dishes you can surely toss a cube of frozen cilantro into it and cook as normal. Cilantro frozen in plastic bags can be used in cooked dishes in which the leaves are mixed. Add them to your dish at the last minute of cooking or else their flavors would vanish into thin air.

Undoubtedly, freezing is the best way to preserve cilantro which allows retaining most of its flavor and texture. This method is best especially when you have to preserve the leaves for a few months.

Sprigs of cilantro preserved in a cup of water, with their bottom end immersed in water, can make them stay fresh and green for up to 10 days.

Drying is the traditional method of preserving herbs. For drying, just bundle up cilantro in small bunches and hang them in a moderately warm place. Don’t expose them directly to hot sunshine. When sufficiently dried, chop and stash them in an air-tight container. Check out 4 methods of drying cilantro in another article.

How long can you freeze coriander?

You can freeze coriander for around 4 months. The longer you freeze coriander lesser their flavor becomes. However, freezing them in ice cubes with water minimizes the risk of freezer burn effects on the leaves.

How do you defrost coriander?

There is no need to defrost the frozen coriander in whichever form. You can directly stir down the frozen leaves in your dish. Similarly, the cubes can be directly tossed into soups, stews, curries, or stir-fries.

Can you refreeze cilantro?

Can you freeze coriander stalks?

Coriander stalks are equally flavorful as the leaves and are a good addition to soups and stews. You can freeze the stems but encase them in a freezer bag for doing so.

Can you freeze coriander chutney?

Just like coriander pesto, you can freeze the coriander chutney as well. For best results, fill it in an ice cube tray for freezing. Once the chutney is frozen hard, pop out the cubes and transfer them into a freezer bag and continue to preserve them in the freezer for future use.

Is parsley a cilantro?

How to use dried herbs in place of fresh?

List of substitutes for every herb used in cooking.

Cooking with cilantro: 6 tips on correct use.