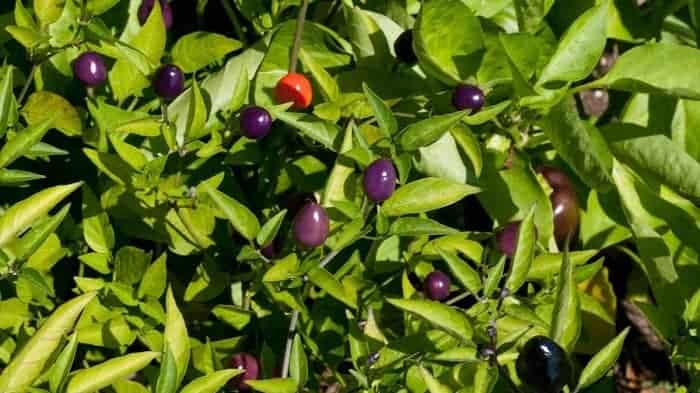 What are Filius Blue peppers?

Peppers in blue color are a rarity thus they naturally gain an exotic label and ornamental value. Filius blue is a tiny chili with deep dark indigo blue and purplish hues. It’s more popular as an ornamental pepper than for its culinary uses.

Filius Blue is an heirloom chile of Mexican origin and belongs to the Capsicum Annuum family of chilies. It’s a small compact plant that grows a maximum of 2 feet tall with soft white flowers and dark blue shaded foliage. You can conveniently plant them in flowerpots or grow bags as an ornamental plant and harvest their peppers as well.

The chilies appear in a conical shape with approximately an inch in length. As they grow, the color changes from an indigo blue and purple to orange and finally bright red. It’s amazingly beautiful to see many chilies growing in different stages in various colors on the same plant – blues, purples, oranges, and red.

The heat level of Filius blue peppers is very close to cayenne pepper which ranks between 30,000 to 50,000 Scoville heat units. They have maximum heat before they ripen into flame red peppers. Blue pepper is 4 to 20 times hotter than common Jalapeno chilies. Obviously, it’s a fantastic pepper for hot sauces and salsas.

Most ornamental peppers appear like sweet fruits for their size and beauty but they pack a lot of heat than you expect. The tender chilies have higher heat and punch than when they are ripened. Typically, most chilies develop more capsaicin the longer they stay on the plant. But Filius Blue pepper bucks that trend and ripened peppers have heat around 30,000 SHU only.

In the process of maturing, this pepper turns blue and purple colors to orange and finally red. They are hottest in indigo blue color while the matured red chiles mellow down its heat.

They are great not only for the ornamental appeal but also for their bell-peppery taste with no complexities attached. Tender chilies are hotter but they develop a distinctive mild sweetness as they age. Overall, these are really hot chilies potent enough to blow up your palate regardless of them being tender or mature. The flavor isn’t a big concern for they are valued for their ornamental appearance. Tallying them with jalapeno heat, you should be using the Filius Blue in moderation even with the small size.

Chilies in blue and purple colors are fanciful and rare colors in the pepper scale. It’s alluring for your eyes to look at the container plants dotted with chilies in unique colors. So to say, it’ll be a precious gem in your garden landscaping. Filius Blue, being a compact plant, can work well in small spaces, like large containers and urban gardens, and indoor or outdoor.

In cooking, Filius Blue is going to good chili-like cayenne pepper to spice up your dishes. They are a perfect fit for salsa and hot sauces. Use them fresh salads, sandwiches, or spice up your savory dishes.

Where To Buy Filius Blue Peppers?

Being one of the most sort after ornamental peppers, Filius Blue seeds and plants are easily available in many plant nurseries and online gardening stores. No one really cultivates it for its peppery bites, thus think of buying Filius Blue if you have a predilection for ornamental gardening.

If you are looking for freshly harvested Filius Blue peppers, then you might find them in supermarkets with Mexican spice sections or buy them from online spice merchant stores.

The only known blue chili is Filius Blue and it does not have any similarity to bell pepper. The maximum size of a blue pepper is only 1 inch whereas bell peppers usually range in size from 2 to 5 inches in diameter and 2 to 6 inches in length. The heat levels of bell pepper range from 500 to 4,000 Scoville heat units, thus blue chili is 30 to 40 times hotter than bell peppers.